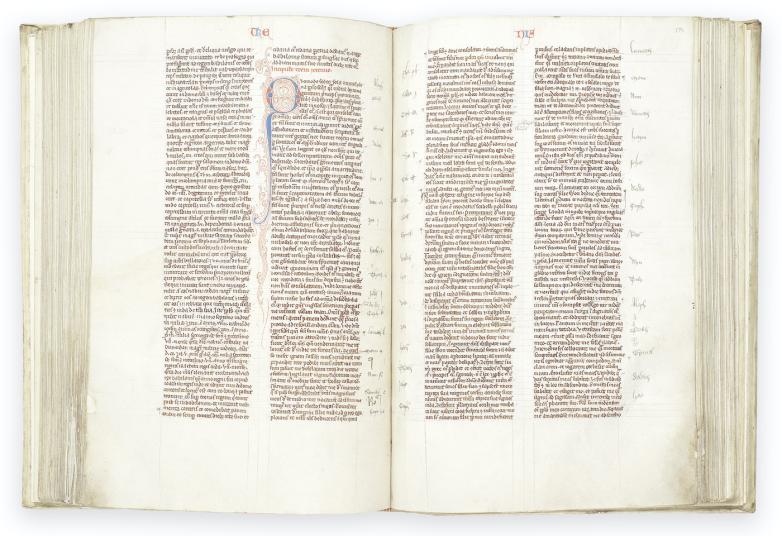 A very busy week coming up: First up, the Music and Antiquarian Books and Manuscripts sale at Sotheby's London ends on Tuesday, November 30. The 181 lots include an 1815 Beethoven letter to his librettist Friedrich Treitschke about a planned opera (£60,000–80,000) and a c.1475 edition of Jacobus de Voragine's Legenda aurea sanctorum being sold by the Brooklyn Museum (£40,000–60,000). Also being sold by the Brooklyn Museum, a 1460s Bruges Book of Hours on vellum (£30,000–40,000). A collection of printed and manuscript liturgical fragments collected by William Henry James Weale could sell for £7,000–10,000.

At Bonhams London on Tuesday, 168 lots of Soviet Political & Propaganda Posters: The Sergo Grigorian Collection. Gustav Gustavovich Klutsis' 1935 photomontage poster depicting Stalin at the head of people of every nationality is estimated at £8,000–12,000. Another Klutsis poster, proclaiming glory to Pushkin (1937) could sell for £7,000–10,000.

On Wednesday, December 1, 84 lots of Fine Books and Manuscripts at Bonhams London. There will be a great deal of interest here to the Dickens collector, and many lots are from the library of the late A.J. Karter. A large-format thirteenth-century manuscript Bible known to have been in England by the fifteenth century shares the top estimate of £40,000–60,000 with a first impression of Harry Potter and the Philosopher's Stone. Recently found in an attic, this copy has "since then stored in a saucepan for safety." A set of the original parts of the Pickwick Papers could sell for £15,000–20,000.

Ending on Wednesday at Sotheby's London, The Fantasy World of Arthur Rackham: Rare Original Illustrations from the Collection of Shirley Carter Burden, in 31 lots.

Exiles and Idealists: A Private Collection of Russian Literary Manuscripts will be sold at Christie's London in a sale ending on Wednesday.

Forum Auctions will sell 325 lots of Modern Literature on Thursday, December 2. A first edition of Lord of the Flies is estimated at £3,000–4,000.

At Sotheby's New York on Thursday, Making our Nation: Constitutions and Related Documents, Part 2. These 185 lots are being sold to benefit the Dorothy Tapper Goldman Foundation.

PBA Galleries sells 245 lots of Antiquarian Books on Thursday. Le Bon Genre, a selection of 100 plates from the Gazette du Bon Genre from 1920–22, could sell for $3,000–5,000; the same estimate has been assigned to Cymbeline extracted from the 1632 Second Folio.

Rounding out the week are two sales at Addison & Sarova, Fall Books & Ephemera on Saturday, December 4 and Bookworm Sale on Sunday, December 5.