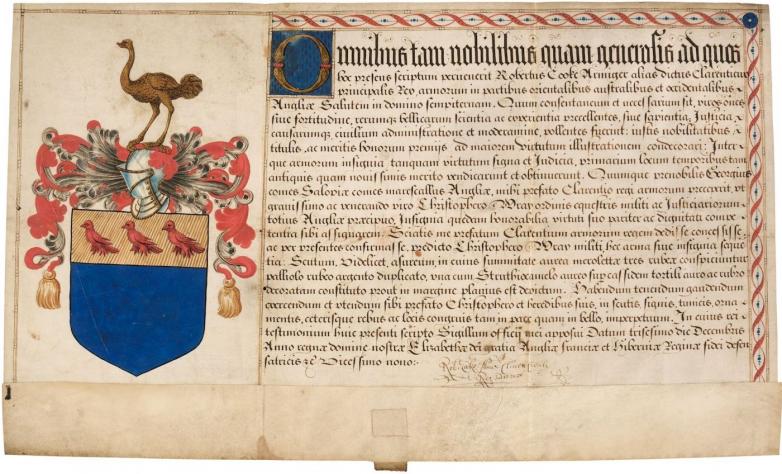 Patent of arms on vellum for Sir Christopher Wray, 1586, offered at Dominic Winter Auctioneers this week.

Heritage Auctions holds an Illustration Art Signature Auction on Monday, October 4, in 523 lots. Two James Allen St. John oil paintings for book jacket illustrations share the top estimate of $80,000–120,000: At the Earth's Core and The Chessmen of Mars. Both were previously in the collection of Glynn and Suzanne Crain. Robert Peak's movie poster illustration for Apocalypse Now could sell for $50,000–70,000. The painting used for the Ace Books paperback cover of Philip K. Dick's The World Jones Made (1956) is estimated at $30,000–50,000.

On Wednesday, October 6, Printed Books, Maps & Documents at Dominic Winter Auctioneers. The 380 lots include Thomas Malton's Picturesque and Descriptive View of Dublin (1792–99), which could fetch £7,000–10,000. A 1586 patent of arms for Sir Christopher Wray by herald Robert Cooke is estimated at £4,000–6,000. An album of 79 watercolors of Scottish scenes based on William Daniell's Voyage Round Great Britain is estimated at £2,000–3,000. Some interesting natural history and ornithological material in this one too.

PBA Galleries sells 475 lots of Americana – Travel & Exploration – World History – Cartography on Thursday, October 7. A second edition of Cook's Voyage to the Pacific Ocean (1785) with the plates and maps bound into the text instead of in a separate folio volume rates the top estimate at $7,000–9,000. A 1914 six-sheet movie poster for the documentary film Panama and the Canal from an Aeroplane is estimated at $5,000–8,000. Shortly after this, flights over the canal were banned. A complete set of county highway maps issued by the Nevada Department of Highways from 1937 to 1940 could sell for $4,000–6,000.