Quite a busy week coming up in the sale rooms. Here's what I'll be watching:

On Tuesday, September 14, The Exceptional Literature Collection of Theodore B. Baum: Part One at Christie's New York, in 173 lots. The remarkable Richard Manney copy of Mary Shelley's Frankenstein in original boards is expected to sell for $200,000–300,000. The Irwin Silver copy of Darwin's Origin of Species is estimated at $150,000–250,000. A Shakespeare Second Folio could fetch $180,000–250,000, and a Fourth Folio is estimated at $100,000–150,000. This copy bears the signature of Charlotte Rowe, daughter of Shakespearean editor Nicholas Rowe. A first issue copy of Poe's The Raven and Other Poems in wrappers rates the same estimate. Basically this entire sale is a high-spots romp, so do have a look through at the excellent lots. 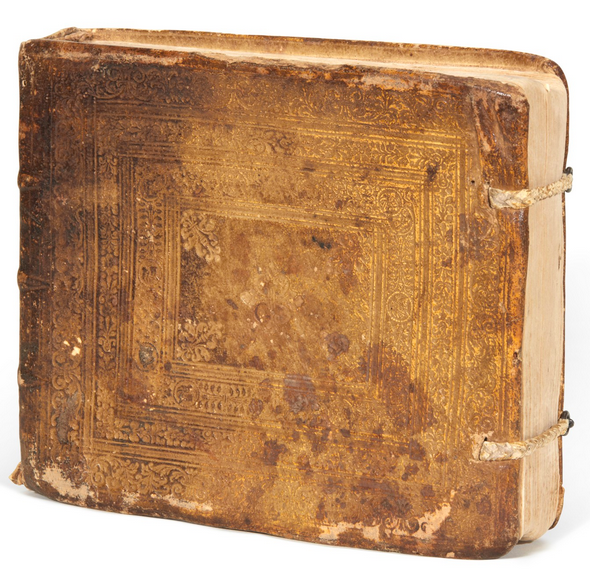 The lute music manuscript is bound in contemporary German pigskin.

Sotheby's London sells 126 lots of Early Music: Rare Music Manuscripts, Printed Music and Books from the Library of Arnold Dolmetsch (1858–1940), the sale ending on Tuesday. An unpublished seventeenth-century manuscript of Italian and French lute music, in a contemporary German pigskin binding is estimated at £120,000–180,000. A later manuscript lute music volume from the eighteenth century could sell for £80,000–100,000, and a mid-seventeenth-century manuscript volume of solo bass viol music rates a £60,000–80,000 estimate.

The New England Book Auctions sale of Fine Books & Ephemera also ends on Tuesday. A good range as usual in the 175 lots.