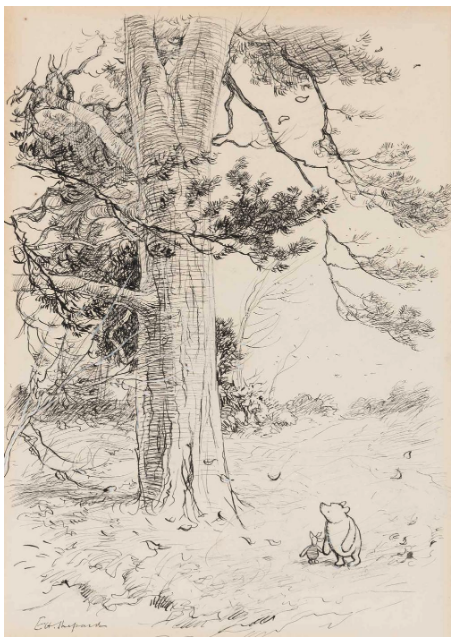 E.H. Shepard's drawing "Suppose a tree fell down when we were underneath it," for The House at Pooh Corner, offered at Doyle New York this week.

Here are a few of the upcoming online auctions that I'll be watching:

Doyle's sale of Rare Books, Autographs & Maps ends on Wednesday, April 22. This 173-lot sale features items from Mary K. Young's collection of Beatrix Potter and E.H. Shepard, including a Potter picture letter with eight original ink drawings to accompany portions of Lear's "The Owl and the Pussycat"; an ink and watercolor drawing on card of two rabbits sledding; and Shepard's original drawing for The House at Pooh Corner, "Suppose a tree fell down when we were underneath it." These three lots are each estimated at $40,000-60,000. A framed set of Potter's miniature autograph letters signed by Benjamin Bunny, Peter Rabbit, Josephine Rabbit, and Mr. McGregor, with an additional postcard signed by Potter—all addressed to Jack Ripley—is estimated at $30,000–40,000. There will be many more lots of great interest to the Potter and Shepard collector, as well.

Other lots include a February 1797 George Washington letter written as he prepared to return to Mount Vernon (previously in the Forbes Collection), which is estimated at $25,000–35,000; and a copy of the four-volume 1808 Bible printed at Philadelphia by Jane Aitken ($5,000–8,000).

Heritage Auctions will sell Historical Manuscripts on Wednesday, in 659 lots. A 1950 Albert Einstein letter to his friend Michele Besso has been assigned an opening bid of $35,000. A set of nearly 100 unfiltered notes written by JFK to his aides while he was campaigning for president in the spring of 1960 and had lost his voice will start at $20,000. A short note from George Washington to Benjamin Lincoln has a set reserve of $17,500.

On Thursday, April 23, Doyle holds a 174-lot sale titled Autograph Seeker: The Estate of Gary Combs. A 1799 John Adams letter to Secretary of War James McHenry is estimated at $5,000–8,000 and is expected to lead the way.

Also on Thursday, Americana from the George E. Steinmetz Collection (with additions) at PBA Galleries. This sale is entirely no-reserve, with timed closings. Lots of Book Club of California publications and many from the Dawson's Book Shop Baja California Travels Series.

Rounding out Thursday's sales, Books and Works on Paper at Forum Auctions, in 291 lots. A copy of the "Memorial Edition" of the works of Sir Richard Francis Burton (1893) and the Trianon Press edition of Blake's Songs of Innocence (1955) share the top estimate of £600–800. At £500–700 are three photograph albums from the family of Benjamin Britten and three volumes of eighteenth-century almanacs.