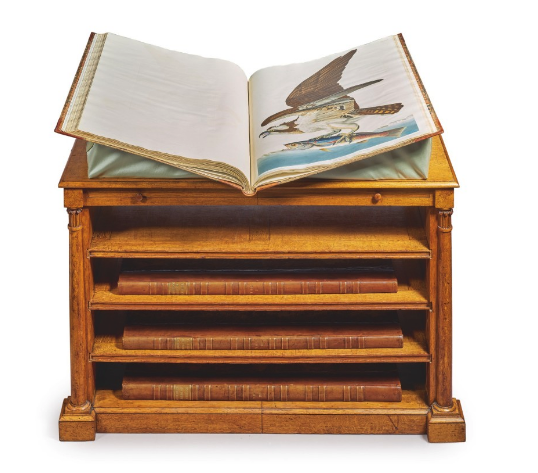 A great big week coming up:

Also on Tuesday, Sotheby's New York holds a History of Science and Technology sale, in 108 lots. Among the books and manuscripts are some Isaac Newton manuscripts (a leaf of his notes on ancient historians and a copy of his "A Short Chronicle from the first memory of things in Europe to the conquest of Persia by Alexander the Great" ($60,000–90,000); two typed letters signed and a book inscribed by Stephen Hawking to physicist Lewis Strauss ($80,000–120,000); a signed photograph of Albert Einstein writing on a chalkboard ($60,000–90,000); and biologist Ernst Mayr's copy of the first edition of Darwin's Origin ($50,000–80,000).

On Wednesday Sotheby's Books and Manuscripts Week continues in New York with a 205-lot sale of Fine Books and Manuscripts, Including the Olympic Manifesto. Pierre de Coubertin's autograph manuscript of his 1892 speech calling for the revival of the Olympic Games is estimated at $700,000–1,000,000. A 1944 Mao Zedong calligraphic manuscript thank-you note to Major Wilbur Dexheimer, described as the earliest Mao autograph letter ever sold on the international auction market, could sell for $300,000–500,000. Other highlights are expected to include a first issue of Whitman's Leaves of Grass ($150,000–200,000); a copy of the fine-paper issue of the first book edition of The Federalist ($130,000–180,000); and the Prescott-Manney copy of Poe's The Raven and Other Poems ($120,000–180,000).

Following the morning session at Sotheby's on Wednesday comes the big kahuna of the week: at 3:30 p.m. they will sell John James Audubon's The Birds of America. This early subscriber's copy is accompanied by Audubon's Ornithological Biography and an oak folio display cabinet from around 1830. The set is estimated at $6–8 million, and it will certainly be interesting to see how the bidding goes on Wednesday! The auction catalogue provides a great overview of Audubon's Birds and recent auction sales of the work.

Rounding out the week is a sale of Americana – Custeriana – Travel & Exploration – Cartography at PBA Galleries on Thursday, 19 December, in 457 lots. A three-volume set of the second edition of Captain Cook's Voyage to the Pacific Ocean (1785), with the plates bound into the text volumes, is estimated at $8,000–12,000. Two clipper ship logbooks from the early 1850s are estimated at $6,000–9,000, as are Matthew Pear's journals documenting his trips to and from Boston and San Francisco, 1852–1854. Lots 415–457 are being sold without reserve.