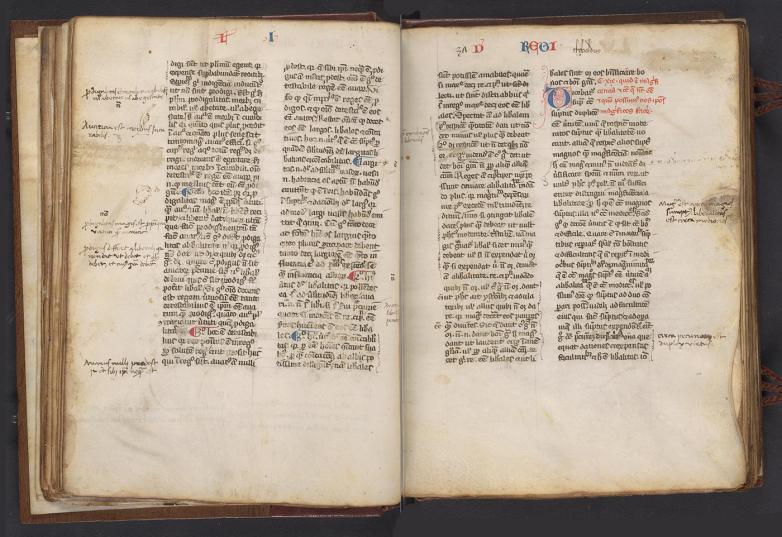 "De regimine principum," authored by Giles of Rome and written by an unknown scribe in France, ca. 1350.

Centuries’ worth of scribbled notes and doodles in manuscripts and early printed books will be revealed tomorrow in Bryn Mawr College’s new exhibition, Private Lives of Old Books: Recovering Personal Histories from Early Books of Latin. Curated by PhD candidate Kate Barnes under the direction of Catherine Conybeare, Leslie Clark Professor in the Humanities and Professor of Greek, Latin, and Classical Studies, the exhibition highlights marginalia found on the pages of Latin texts.

Conybeare told us more about the exhibition, what inspired it, and her favorite pieces on display.

FB&C: What inspired this exhibition?

CC: The show was inspired by a conversation I had—some time ago now—with Carrie Robbins, our curator for art and artifacts. I was talking about a book series I’d just started with Cambridge University Press, “Cultures of Latin from Antiquity to the Enlightenment.” And she—mindful of our amazing collection of rare books, especially incunables, and manuscripts—suggested that we do a show together both to celebrate the series and to showcase our collections.

That’s how the idea was born. Given my own textual focus, I was thinking of a show that highlighted marginalia and annotations on Latin texts. But then a graduate student of mine, Kate Barnes, got into the conversation. She’s an amazingly creative and intuitive thinker. She began attending to a much wider range of signs of use—everything from doodles to rodent damage, as well as the original idea of marginalia. It’s now primarily her show: she selected the books, chose the openings, and wrote the didactics.

FB&C: How many books and manuscripts are on display? What years do they cover?

CC: There are just thirteen books on display—a minute percentage of our collection. But we didn’t want the show to be too scattered. After a certain point, you’re in a library already, why not just pull the books and look at them yourself? So we wanted it to be an exciting taster for our special collections. Also, we wanted to leave plenty of space for provocative exposition.

The books, whether manuscript or printed, are almost entirely from the late fifteenth and very early sixteenth century, with the exception of a manuscript of Giles of Rome’s "De regimine principum" which dates to c. 1350, only a generation or so after Giles’s death.

We are also showing a range of Bryn Mawr matriculation exams from 1885-1931. For many years, Bryn Mawr required proficiency in Latin as a condition of entry.

FB&C: They are all Latin? Are they all religious in content?

CC: Yes, they are all Latin, as reflects the focus of the series. Annotations are almost entirely in Latin too. But no, almost none of them is religious. There are a number of core texts from the classical Latin tradition: Ovid, Cicero, Horace, Lucan, Terence, and the three major Latin love elegists (Catullus, Tibullus, Propertius). There is both a manuscript and a printed book of works by Poggio Bracciolini. There is a medical textbook by a fifteenth-century writer from Italy, Antonius Guainerius. And there are a couple of works of Latin grammar: Donatus, the key grammarian from the fourth century CE, and then a fifteenth-century commentary on Donatus. In our active collecting, we have recently been focusing especially on the Latin grammar tradition. The only work in the show where religion is front and center is the Lawrence Book of Hours, a fabulous illuminated manuscript from France.

FB&C: What’s the most interesting/your favorite marginalia on exhibit?

CC: My favorite? That’s an easy one, and it actually breaks the “all Latin” rule. In the margin of the manuscript of Donatus the grammarian—which reputedly belonged to the grandmother of the artist Pontormo—in a looping childish hand are the words “io sono in seniato.” It took me a while to work out that the child was writing “io sono insegnato,” i.e. “I am being taught.” It’s appended to the Latin word that means the same (doceor). But it amuses and pleases me that this is what the child chose to gloss—never mind that s/he misspelled it!

And I adore that in the Lucan manuscript, practically every page has a delicately realized decoration on one or more of the capital letters. Lucan’s Pharsalia is a grim epic about civil war. I love that a reader has lightened it with little images of faces, decorations, even at one point a full medieval knight!

The exhibition will remain on view through December 17 in the Canaday Library. Related events include an opening lecture, “Bookhands and Handbooks,” by Professor Joseph Farrell on September 24 at 4:30 (both in-person and via Zoom, link here); a curator’s tour in-person on October 8; and an in-person guest lecture and objects workshop on November 8-9 with Professor Marjorie Curry Woods.