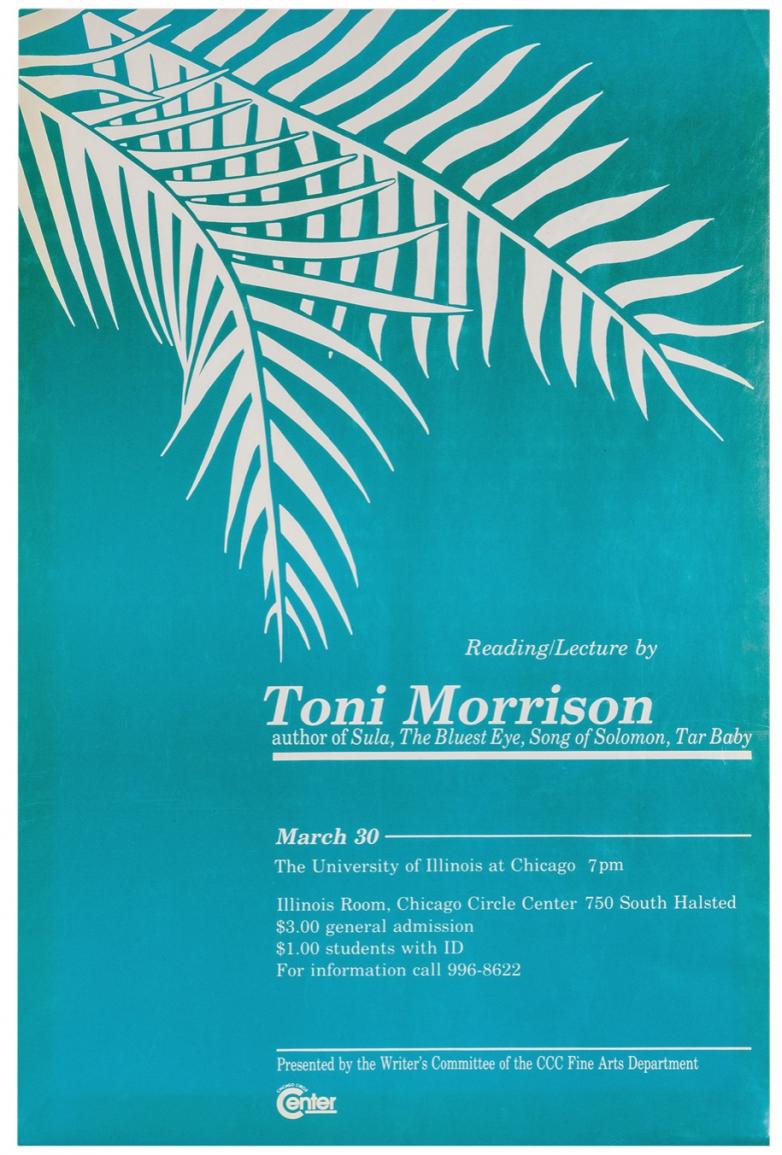 A c. 1980s turquoise and white Toni Morrison reading lecture poster is estimated at $200-300. The piece advertises her appearance at the University of Illinois at Chicago.

Chicago — Potter & Potter Auctions is pleased to announce its upcoming Fine Books and Manuscripts Sale to be held on Saturday, April 18th starting at 10am, CDT. Given the current public health situation, this sale will be streamed live from Potter & Potter's gallery and held on www.potterauctions.com. Bids can be placed on the company's website. Phone and absentee bidding are available as well. All lots are available for preview now on Potter & Potter's website.

Remarkable, hand-signed books and works from some of the world's most recognized authors and personalities take several of the top slots in this this signature Potter & Potter event.

•    Lot #35, a first edition, first printing copy of Ian Fleming's 1963 Thrilling Cities, is estimated at $5,000-7,000. It was published in London by Jonathan Cape, and is inscribed and signed on the title page to Fleming’s personal friend and American spy, David Bruce: “Dave/To keep your mind/off your work!/Ian”.
•    Lot #448, a first edition, signed copy of Amelia Earhart's 1932 Fun of It, is estimated at $1,500-2,500. This fully provenanced example is uncommonly signed on the frontispiece page; in most cases, she signed her name on the front flyleaf. Accompanying the book are two copies of a handbill for an in-person appearance of Earhart and a stack of 1930s newspaper clippings reporting on her.
•    Lot #286, George Herman Ruth's Babe Ruth's Own Book of Baseball from 1928 is estimated at $3,000-5,000. This book was limited to 1,000 signed copies; this example is No. 434. It features the author's clean and bold signature on its limitation page.
•    Lot #392, a near fine example of Rubáiyát of Omar Khayyám, The Astronomer-Poet of Persia…with an accompaniment of drawings by Elihu Vedder, is estimated at $6,000-8,000. This first edition, published in 1884 in Boston by Houghton Mifflin and Company, was signed by the illustrator on its limitation page. It was limited to 100 copies and sold out within six days; this specific example is No. 22.
•    Lot #665, Sean Scully's Heart of Darkness signed portfolio - created exclusively for the classic novella of the same name by Joseph Conrad - is estimated at $4,000-6,000. Created for The Limited Editions Club in 1992, this 20 set limited edition includes 8 color aquatint etchings on cream wove paper; each is signed and numbered in pencil by the artist. This rare complete edition has never before been offered at auction; the etchings are usually sold individually.

This sale features a fine collection of rare, first edition books, including some of the most popular titles of the 19th and 20th centuries.

•    Lot #1, a first edition of Ian Fleming's Casino Royale, published in 1953 by Jonathan Cape of London, is estimated at $8,000-12,000. It retains its original first issue dust jacket and is housed in a matching custom cloth clamshell case, stamped in gilt and with red heart-shaped morocco inlays. This rarity is one of  4,728 copies printed, the majority of which went to public libraries.
•    Lot #28, a first edition, uncorrected proof of Fleming's 1963 On Her Majesty’s Secret Service - also published by Cape - is estimated at $800-1,200. One of 500 printed, it includes its original publisher’s printed wrapper. According to Gilbert A.11.a., "The proof of On Her Majesty's Secret Service has more errors and required more amendments than any other Fleming title, both in terms of careless composition and poor spelling..."
•    Lot #90, a first edition of A. Conan Doyle's The Adventures of Sherlock Holmes, published in 1892 by George Newnes of London, is estimated at $2,000-3,000. This rarity features the noteworthy misprint of ‘Violent Hunter’ for ‘Violet Hunter’ on p. 317. It is accompanied by a first edition of The Memoirs of Sherlock Holmes from 1894, also published by Newnes.

Outstanding selections of ephemera, including letters penned by authors and artists, are well represented in this sale.

•    Lot #442, a typed and signed letter from Albert Einstein, dated June 13, 1935, is estimated at $2,000-2,500. This fully provenanced letter is on his personal letterhead, written in German, and addressed to author and scholar Avraham Yarmolinsky.
•    Lot #647, three typed and signed letters from Norman Rockwell from 1976, is estimated at $250-350. These are all on his personal letterhead, signed in blue ballpoint, and acknowledge the receipt of payments and other requests.
•    Lot #9, a collection early ephemera relating to Ian Fleming, is estimated at $200-300. This material includes A & I Stop Press (1947; supplement to Alphabet and Image) Nos. 1 and 7 and a book catalogue for Elkin Mathews LTD. (1937; No. 69) listing Fleming as one of its directors. These rare and desirable examples are some of the earliest ‘Ian-cunabula’ ephemera on the market.

Also on offer is an eclectic and intriguing range of visually stunning albums and archives.

•    Lot #109, an early photograph album of the Chicago Police Department and scenes of Chicago’s waterfront and downtown areas from c. 1907–22 is estimated at $2,000-2,500. The album contains about 115 neatly mounted black-and-white photos and is handsomely rebound in cloth with a side tie.
•    Lot #112, a Folsom Prison mugshot book from 1914-1919, is estimated at $1,500-2,500. This original prisoner discharge book features approximately 1,090 silver gelatin black and white full-face mugshots affixed to each page, with accompanying handwritten descriptions next to each inmate photo.
•    Lot #445, a collection of photos related to John Glenn orbiting the Earth is estimated at $100-200. It is housed in a teal vinyl album lettered in gilt: “United States Man in Orbit/Lt. Col. John Glenn, USMC Feb. 20, 1962” and contains 50 glossy NASA/AP photos inserted in sleeves, as issued, depicting Glenn preparing for the mission, take-off, his return and “splashdown,” with President John F. Kennedy, and others.

This auction presents wall-to-wall selections of eye-popping and important posters and broadsides.

•    Lot #662, a nuclear disarmament poster by artist Keith Haring (1958–1990), is estimated at $2,000-2,500. This black and white example is printed on smooth wove paper and is inscribed and signed in ink by the artist in lower right: “For Ken/Keith Haring/82”.
•    Lot #268, The Dodo Presenting the Thimble to Alice, from Lewis Carroll's book Alice in Wonderland, is estimated at $500-1,000. This iconic image is one in a series of 6 large, color lithographic posters based on Carroll's tale and was printed by Macmillian in London in 1921.
•    Lot #287, a c. 1980s turquoise and white Toni Morrison reading lecture poster is estimated at $200-300. The piece advertises her appearance at the University of Illinois at Chicago on March 30th.

This can't miss sale closes the loop with carefully curated selections of antiques, fine and decorative art, and other rarities that defy conventional categories.

According to Gabe Fajuri, President at Potter & Potter Auctions, "Our book and manuscript sales continue to draw diverse consignments, as well as high spots in a range of categories. My hat goes off to our specialist, Chris Brink, who curated the selection for the auction."