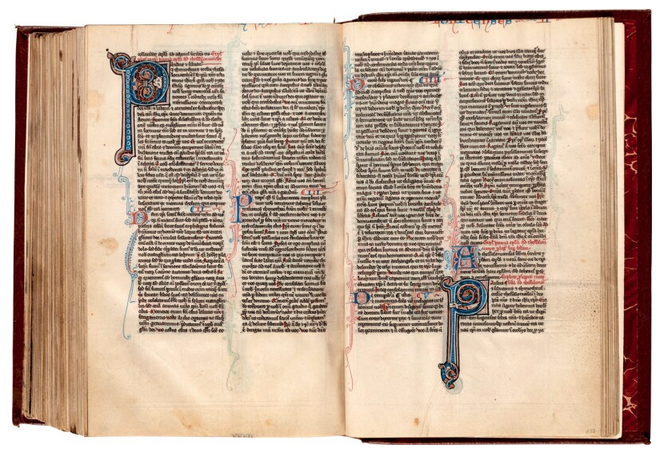 An opening from the thirteenth-century Latin manuscript Bible produced at Oxford, offered at Sotheby's this week.

Quite a big week coming up in the sale rooms. Here's what I'll be watching:

The Christie's online sale of the Collection of Marvin L. Colker ends on Monday, December 12. Colker (1927–2020) was professor emeritus of classics at the University of Virginia and a well-known paleographer and manuscripts scholar. The 161 lots include the Papyrus Colker, a first-century CE Egyptian papyrus fragment documenting Babylonian lunar theory and estimated at £100,000–150,000. A fifteenth-century Tuscan manuscript of Cicero's Tusculanae Disputationes copied by the scribe Pietro de Landini is expected to sell for £20,000–30,000. There will be a great deal in this sale to interest paleographers and codicologists.

At Bonhams New York on Tuesday, December 13, Fine Books and Manuscripts, in 138 lots. Rating the top estimate is a four-page early seventeenth-century scientific manuscript by Johannes Kepler containing notes and calculations on the relative velocity of the moon and the sun ($400,000–600,000). The other components of this fragment are now in the Morgan Library and the Smithsonian. E. H. Shepard's original artwork for the final illustration of Pooh and Piglet in Winnie-the-Pooh is also included in this sale, estimated at $250,000–350,000. And an original signed copy of Nelson's secret plan for the Battle of Trafalgar, sent to Vice Admiral Robert Calder, could sell for $200,000–300,000.

The Sotheby's online Music sale sends on Tuesday: among the 93 lots are a collection of forty-four letters from Johannes Brahms to Handel scholar Friedrich Chrysander, many of which are unpublished and which shed significant light on the composer's musicological scholarship. They are estimated at £80,000–120,000. Also ending on Tuesday is Sotheby's Books and Manuscripts, Medieval to Modern sale, comprising 192 lots. A first edition of Mary Shelley's Frankenstein (1818), with the three volumes bound together, rates the top estimate at £150,000–250,000. A 1632 Shakespeare Second Folio could sell for £120,000–180,000, while a Fourth Folio is estimated at £50,000–70,000. A Latin manuscript Bible written at Oxford in the mid-thirteenth-century was estimated at £24,000–30,000, but had been bid above that estimate by Sunday morning.

At Sotheby's New York on Tuesday, a single-lot sale of the first official printing of the Constitution of the United States, estimated at $20,000,000–30,000,000. One of just fourteen known surviving copies, and one of two in private hands (the other sold last year for $43 million), this copy was sold at auction in 1894 with the collection of Georgia historian Charles Colcock Jones to the Van Sinderen family.

Christie's London sells 234 lots of Valuable Books and Manuscripts on Wednesday. A copy of the 1585–1595 first complete edition of Mercator's Atlas, bound with the 1584 second edition of Mercator's Ptolemy, rates the top estimate at £300,000–500,000. A first edition of Newton's Principia once owned by Newton's correspondent Philippe Naudé the younger could sell for £250,000–350,000.

At University Archives on Wednesday, 381 lots of Rare Autographs, Manuscripts & Books. A lengthy 1812 Thomas Jefferson letter to James Ronaldson is expected to sell for $35,000–45,000.

Rounding out the week at Doyle on Friday, Rare Books, Autographs & Maps, including the Collection of a New York Surveyor, in 215 lots.