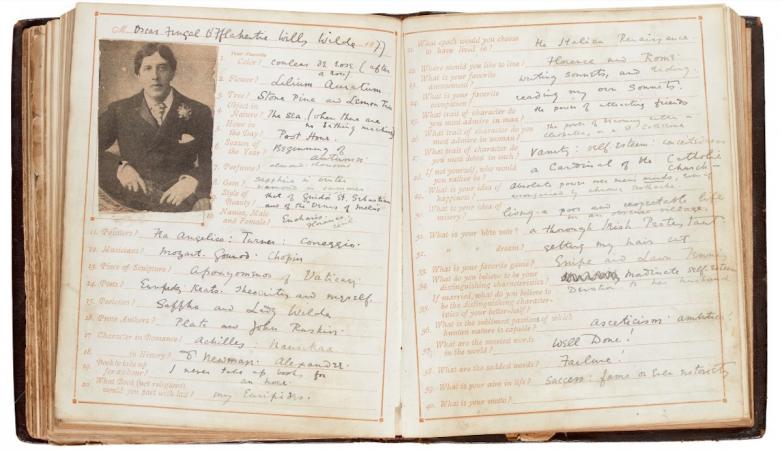 What was Oscar Wilde’s favorite amusement? “Writing sonnets and reading.” Favorite occupation? “Reading my own sonnets.” Aim in life? “Success: fame or even notoriety.”

In 1877, while still a student at Oxford, Wilde penned these revealing responses within the pages of a Mental Photographs album, a bound journal that one would hand around to friends to elicit their “confessions of tastes, habits and convictions.” Alongside his pasted-in carte-de-visite, Wilde answered thirty-nine of the forty questions (apparently he did not wish to share his motto) and signed his full name, Oscar Fingal O'Flahertie Wills Wilde. At auction in London earlier this week, the volume sold for £47,880 (about $62,000).

His favorite poetess? Sappho—and his mother, Lady Wilde. His idea of happiness? “Absolute power over men’s minds, even if accompanied by chronic toothache.”

“Wilde’s responses sparkle with the author’s characteristic ebullience and many are perfect Wildean epigrams. Knowing what we do about Wilde’s sharp wit and lofty world-view, his replies are exactly what one would expect to see from this bold intellectual young writer, still in his early twenties but already experiencing his first taste of fame. This questionnaire — likely filled in for an admiring fan — freezes the young Oscar in a moment in time, but also provides a chilling prophecy of what was to come,” said Sotheby’s director and senior specialist in the department of printed books and manuscripts, Dr. Philip Errington.

Back in our summer 2016 issue, we took a look at the mid-nineteenth-century Mental Photographs fad and how it evinced the tastes of the day. Even Frederick Engels played the bourgeoisie parlor game, and Mark Twain provided flippant replies when asked to fill one out. "These questions are so arranged as to ferret out the most secret points of a man's nature without his ever noticing what the idea is until it is all done and his 'character' gone for ever,” noted Twain. (Sounds like those ubiquitous questionnaires that circulate on Facebook.)

The album was offered amongst a collection of Wilde first editions from the collection of actor and director Steven Berkoff, a.k.a. General Orlov in 1983’s Bond classic, Octopussy.