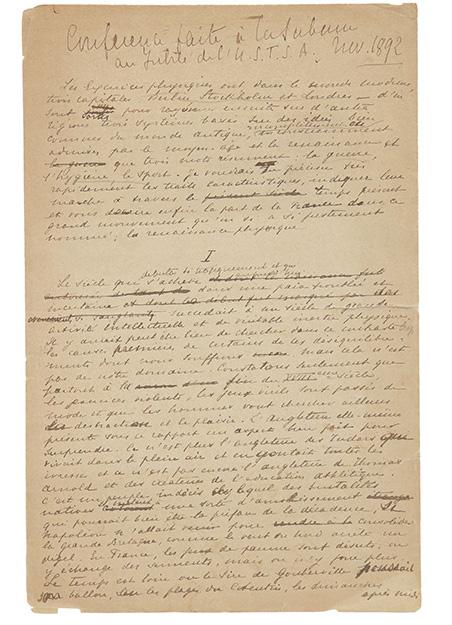 The Original Olympic Games manifesto led Sotheby’s December sales of Fine Books and Manuscripts and History of Science and Technology, as part of Sotheby’s final day of auctions in 2019.

ORIGINAL OLYMPIC GAMES MANIFESTO
Selby Kiffer, International Senior Specialist in Sotheby’s Books & Manuscripts Department, said: “Driven by competition from around the world, today’s record result stands as a testament to Pierre de Coubertin’s vision of more than a century ago, and the reverence with which the Olympic games are still held. It was a personal honor to serve as today’s auctioneer, as this marks my highest price on the rostrum in more than three decades at Sotheby’s.”

The original Olympic Games manifesto, written in 1892 by French aristocrat, educator and athletics advocate Pierre de Coubertin, outlines his vision for reviving the ancient Olympic Games as a modern, international athletic competition. The 14-page manuscript is the only known copy of the manifesto in existence, and was written in French by Coubertin as a speech he delivered in 1892 for the fifth anniversary of the French Athletics Association held at the Sorbonne. The first modern Games were organized shortly thereafter in Athens, Greece in 1896, and the ideas espoused by Coubertin continue to underpin the Olympic spirit of excellence and sportsmanship that has made the Games the preeminent international sporting spectacle to this day.

In his speech, Coubertin outlined his idealist vision for reviving the ancient Olympic Games as part of a wave of progressive social movements taking hold in Europe and the United States, and he drew connections to the rise of athletics to other new ideas, technologies and systems that were propelling human progress and innovation, such as the telegraph, railways and developments in scientific research. Coubertin provides case studies on the state of athletics in countries such as Germany, Sweden, the United Kingdom, France, and elsewhere around the world to show that athletic endeavor was no longer primarily the domain of military training, but had evolved into a pursuit of individual excellence that had personal as well as societal benefits.

*The previous world auction record for sports memorabilia was $5.6 million, for a jersey worn by Babe Ruth sold in June 2019.

AUDUBON’S THE BIRDS OF AMERICA
Richard Austin, Head of Sotheby’s Books & Manuscripts Department in New York, commented: “It was a privilege to handle this exceptional edition of John James Audobon’s The Birds of America. We’re thrilled that it has been acquired by Graham Arader, who shares our enthusiasm for Audubon and this icon of American art.”

Sold in a single-lot sale following the conclusion of our Fine Books and Manuscripts auction, an early subscriber’s edition of John James Audubon’s incomparable The Birds of America reached to $6.6 million – surpassing it’s $6/8 million estimate. Featuring 435 magnificent hand colored etched plates depicting 1,065 life-size birds representing 489 supposed species of the then-known birds found in the United States, the folio is an unusually large and brilliantly colored edition, with the plates in very early state. Commonly known as the Double Elephant Folio – named for the size of the paper that had to be specially made for the publication – The Birds of America has long been recognized as the most important and most beautiful color-plate book ever published, and it is universally acknowledged as one of the most important achievements in both book illustration and natural history.

WORLD AUCTION RECORD FOR AN ENIGMA MACHINE
Sotheby’s third annual History of Science & Technology auction totaled $2.5 million on Tuesday, and was led by a Four-Rotor (‘M4”) Enigma Cipher Machine. Appearing at auction for the first time ever, the fully-operational Enigma M4 from 1942 achieved $800,000, setting a new world auction record for an Enigma machine and far surpassing its high estimate of $500,000. Considered the most desirable of all Enigmas and the hardest version to decrypt, the present machine is an example of the famous German Four-Rotor Kriegsmarine Enigma Cipher Machine, which were specifically developed for use by the U-boat division of the German Navy (Kriegsmarine) for communication with the naval bases. In pristine condition and with all of its working parts, the machine was one of 15 Enigma machines used at a German naval base in Trondheim, Norway during World War II. In addition to its rare status as a fully functioning Enigma machine, the M4 is particularly unique as it boasts completely traceable provenance: seized by a member of the Norwegian navy who specialized in radio and radar after the conclusion of the war, the machine was consigned to yesterday’s auction by his son.