The National Trust Puts its Rare Books on Exhibit 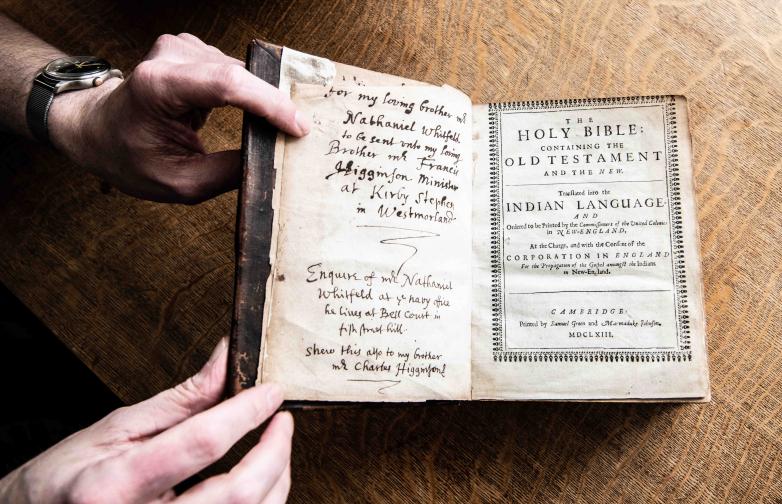 The Eliot 'Indian' Bible (1663) on exhibit at Blickling Estate.

The National Trust holds around 400,000 titles in their 160 historic properties in the UK. Rarities includes William Caxton’s 1487 Lyme Missal at Lyme Park in Cheshire and the first edition of Virginia Woolf’s Orlando, given by the author to Eddy Sackville-West while he was living at Knole. The charity is also increasingly putting its finest items on display, and there are currently two excellent exhibitions at Peckover House and Blickling Estate.

Lord Peckover’s Lost Library concentrates on Quaker banker and philanthropist Alexander, the first Baron Peckover (1830-1919), who collected ancient manuscripts and early maps, many of which he donated to the Royal Geographical Society in 1905. When his home was acquired by the National Trust in 1948, most of the contents and none of the library at his Cambridgeshire residence were included and it was instead dispersed to collectors and museums worldwide. To mark the centenary of his death, the house has been working to find these lost volumes and bring some of them home.

An important part of Lord Peckover’s library was his huge collection of bibles and on show is his 1538 New Testament (on loan from Colchester and Ipswich Museums) translated by Miles Coverdale who disliked this edition because of its many misprints. Also on display is a 1635 Theatrum Orbis Terrarum (from Wisbech & Fenland Museum) produced by the Amsterdam publishing firm of Willem Blaeu, a lavish, hand-colored atlas with more than 200 maps, including one of the earliest mappings of Australasia and the American colony of Virginia.

Meanwhile at Blickling in Norfolk, The Edge of Things includes some of its most significant volumes including the Eliot Bible (1663, pictured above), one of the first books printed in British North America, translated into the Massachusset Indian dialect by Englishman John Eliot who learned the language phonetically from the Wampanoag tribe. The Blickling copy is one of forty surviving first editions. Other delights include Robert Hooke’s groundbreaking book of microscopy, The Micrographia of Minute Bodies (1665), the star atlas Harmonia Macrocosmica (1661), and Conrad Gessner’s Historia Animalium (1551–8), the first effort to list all known creatures, though noting that the unicorn and hydra “may not actually exist.”

Lord Peckover’s Lost Library runs until November 17 and The Edge of Things until October 27.