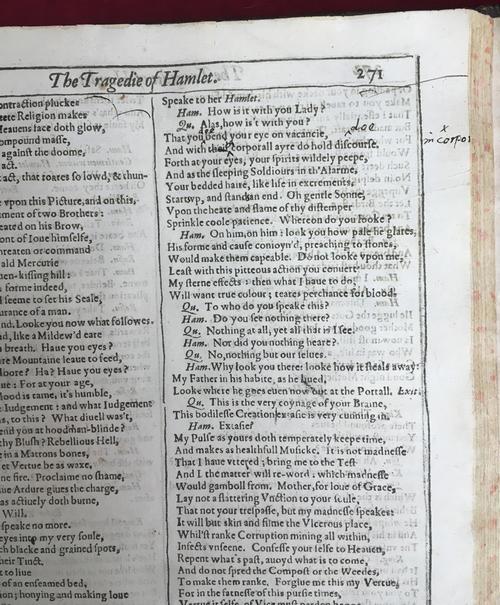 Courtesy of the Free Library of Philadelphia

By now many of you will have heard the exciting news that scholars Jason Scott-Warren and Claire M.S. Bourne have identified John Milton as the annotator of the Free Library of Philadelphia’s copy of the First Folio. Bourne, an assistant professor of English at Pennsylvania State University, recently published an article on the Free Library First Folio’s interesting marginalia, which caught the attention of Scott-Warren, of the Centre for Material Texts at the University of Cambridge, England, who recognized the distinctive handwriting as Milton’s. He announced his discovery in a blog post, and soon several scholars were letting him know, via Twitter, that they agreed with his astonishing assessment.

“The Free Library’s copy of the First Folio has long been celebrated for its notable marginalia, which include markings that attempt to correct perceived errors in the text, others that highlight key passages, and still others that point out textual variants, as well as sources for some of the passages,” according to a statement posted by the library. “This same marginalia now suggests the volume’s unique provenance.”

If you’d like to get a close-up look at this historic association copy of Shakespeare’s First Folio, the Free Library has put it on display through October 19.