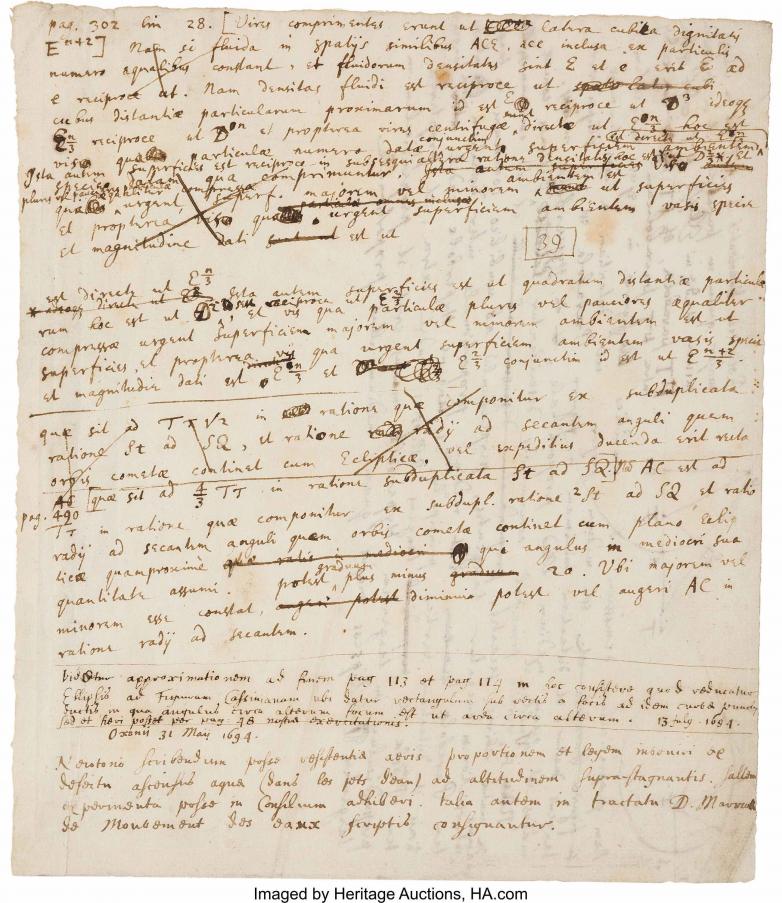 An autograph manuscript in Latin by Sir Isaac Newton is estimated to sell for $50,000+.

Dallas – An array of extraordinary rare documents is headed to the auction block when Heritage Auctions presents The Maurice Car Collection of Arts and Sciences, Featuring Rare Books & Manuscripts Sept. 4 in New York.

Car (1908-68) was an engineer who was a dedicated collector of the arts, sciences and humanities. The lots presented in the sale represent his focus on highpoints and seminal works of key participants in the three academic disciplines. Even after he and his family moved in 1940 to Washington, D.C., he remained an active participant in Parisian and international auctions.

His background in science bolstered his interest in obtaining items with substantive content spanning centuries of discovery in astronomy, mathematics, physics, chemistry, biology and archaeology.

“This is an extremely impressive collection,” Heritage Auctions Rare Books Director James Gannon said. “It has documents from some renowned scientists, and a great collection of fine art papers, which focus on Cubism, Surrealism and Dada, with materials from some historically great artists like Claude Monet, Henri Matisse and Paul Gauguin.”

Handwritten in Latin by one of the most influential scientists in history, Sir Isaac Newton’s Autograph Manuscript, Notes on Physics and Solid Geometry, with Two Diagrams (estimate: $50,000+) contains notes on physics and solid geometry. The document is on two quarto pages with Newton’s notes in dark brown ink. Two diagrams with parabolas and ellipses also appear on the verso. The notes, which appear to have been written at two different times, are taken from a work on physics and discuss the weight and movement of water.

Tristan Tzara’s Autograph Manuscripts on Dada (estimate: $20,000) are in an album of 20 manuscripts, both hand-written and typed, bound in a custom Paul Bonet fine-art binding, relating to Tzara’s activities in the Dada movement of the European avant-garde in the early 20th century. It is believed Tzara personally would have gathered the assembled manuscripts, which he wrote, and given them to Bonet to place in the binding.

"Le diable au corps" is a typed manuscript by Raymond Radiguet with holograph corrections (estimate: $15,000+) in a significant archive of 122 leaves, paginated 1-123 (with pages 6 and 7 on the same leaf) refers to Radiguet’s first novel. The typescript is followed by 17 numbered leaves of typescript with the title Fin du texte Diable au corps. The volume includes holograph corrections throughout by the artist. Radiguet, known as Enfant Terrible, only published two novels, which were noted for their explicit themes  and unique style and tone.

Pablo Picasso’s Honoré de Balzac Le Chef D’Oevre Inconnu (estimate: $10,000+) is a limited and extra-illustrated edition based on the 1831 first edition. No. 182 of 240 copies printed on paper by Rives, it was printed Nov. 12, 1931, by Aimé Jourde and Louis Fort in Paris, and includes 13 etchings, 67 wood engravings (cut by George Aubert after Picasso drawings) and an extra suite of 12 etchings by Picasso. A reflection on art, the work originally was issued in August 1831 as a short story in the L’Artiste newspaper with the title "Maître Frenhofer" (Master Frenhofer).

Paul Gauguin. Autograph Manuscript. "On Ugliness:..." (estimate: $10,000+) includes four pages in French from a manuscript by Gauguin about contemporary art, including Odilon Redon. The two French post-Impressionists were contemporaries. In this rambling, stream-of-consciousness manuscript, Gauguin shares his positive thoughts about Redon, and shares his thoughts about other artists of the period.

To see images and learn more about all of the lots in the auction, visit ha.com/6218.