In ancient Rome, correcting errors chiseled into stone was no small undertaking, and, as far as modern historians can tell, slip-ups were unusual. Perhaps the most significant masonry commission for an average Roman was for the family funeral plaque--certainly not the place to screw up. But, nobody’s perfect, and one funerary plaque bearing the scars of a mistake, complete with a revision, is heading to auction on July 3 at Christie’s in London. 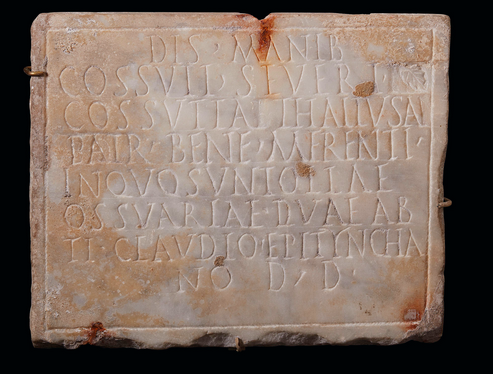 Consigned by Massachusetts-based collector Victor Gulotta, the nearly twelve-inch-wide marble slab is inscribed on both sides. The front reads, in Latin, “Faustina (set this up) for Restuta and herself.” On the reverse is etched ‘To the Spirits of the Dead of Cossutius Severus, Cossutia Thallusa, to her well-deserving patron (set up this monument), in which there are two vessels for bones, given as a give by Tiberius Claudius Epitynchius.” However, one of those benefactors wasn’t quite as dead as the inscription suggested. According to a recent paper published in the German-language Journal of Papyrology and Epigraphy, scholar Ricardo Bertolazzi says that each face of this unusual double-sided stone was inscribed perhaps two centuries apart, and that one of the inscriptions reveals a stonecutter’s error and attempts at correcting it. Bertloazzi points to scratches the stonecutter made to wipe out the offending Latin suggesting that the lady Thallusa was already deceased. The errant endings were “erased” as best as possible, but left behind tell-tale marks that mar an otherwise stately stone.

With presale estimates starting at $8,918-$11,466, this piece serves as a potent reminder that mistakes were, for much of recorded history, tough to scratch. See if you can spot the changes here.