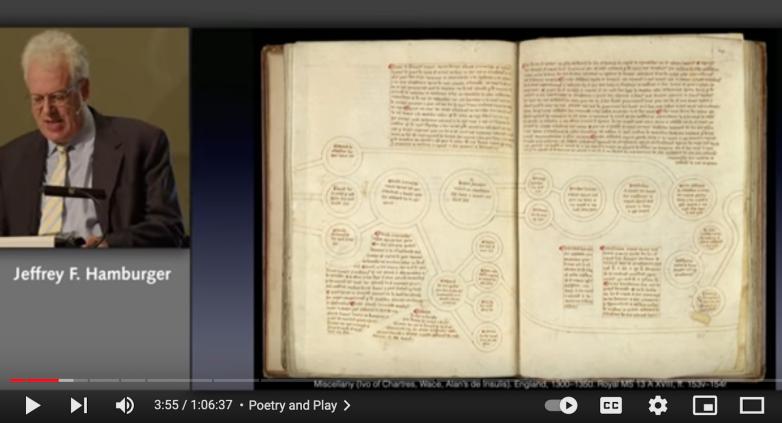 The latest series of Panizzi Lectures run by the British Library is now available to view via its YouTube channel.

Named after the 19th century former Principal Librarian of the British Museum Anthony Panizzi, the annual lectures are based on original research by eminent book scholars on subjects relating to bibliography including codicology, typography, bookbinding, book illustration, cartography, historical critical and analytical bibliography.

The 2022 lecturer was art historian Professor Jeffrey F Hamburger from Harvard University who specializes in illuminated manuscripts and medieval religious art from the High and later Middle Ages.

His three lectures on diagrams were titled Drawing Conclusions: Diagrams in Medieval Art and Thought. They included: Maps of the Mind: Diagrams Medieval and Modern; The Codex in the Classroom: Practical Dimensions of Medieval Diagrams; Poetry, Play, Persuasion: The Diagrammatic Imagination in Medieval Art and Thought. Followed by a drinks reception. The streaming and recording of the 2022 lectures was sponsored by New York antiquarian specialist Jonathan A Hill Bookseller.

A full list of previous lecturers dating back to its establishment in 1985 is available on the British Library site. Some are available on soundcloud, the 2021 series presented by Cynthia Brokawa is on woodblock publishing and Chinese book culture in the early modern era is on the British Library Player, and the lectures of former Archibishop of Canterbury Rowan Williams is on YouTube.

The 2023 lecturer will be former President of the Bibliographical Society Henry Woudhuysen, Rector of Lincoln College, University of Oxford. Subject and dates to be confirmed but the lectures are normally given in late autumn/winter.