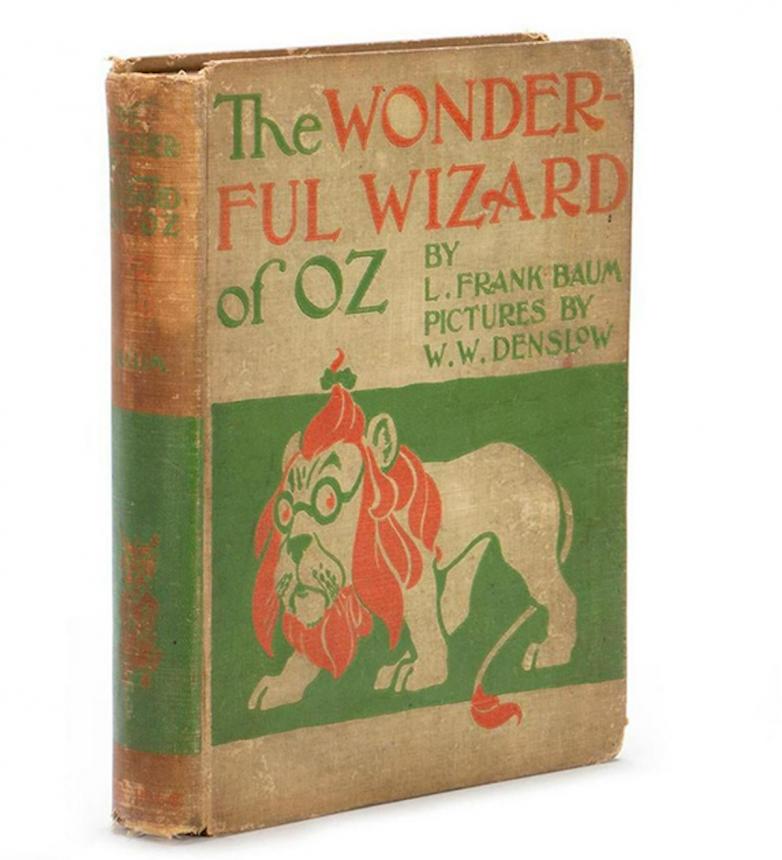 San Francisco – Turner Auctions + Appraisals is pleased to present The Joel Harris Collection of Oziana & Children’s Books on Saturday, September 26, 2020. Curated by the Director of Special Publications of the International Wizard of Oz Club–who is also an author, collector and San Francisco Bay Area estate planning and probate attorney–Mr. Harris’s sale offers over 190 lots of first edition and vintage books, featuring a captivating and broad selection of Oz books. These include The Wonderful Wizard of Oz, The Land of Oz, The Emerald City of Oz, Glinda of Oz, Scarecrow of Oz, Tik-Tok of Oz, and others. The Oz series was written by L. Frank Baum (1856-1919), a prolific American author best known for his children's books–in particular The Wonderful Wizard of Oz and its 13 sequels, plus 41 other novels, 83 short stories, and more than 200 poems and 42 scripts.

Oz collection highlights include The Wizard of Oz from 1939 signed by movie cast members; a first edition from 1899; and six editions of the same book that all vary from one another. This online auction also features other books by Baum, including Mother Goose in Prose, with illustrations by Maxfield Parrish; Queen Zixi Of Ix, The Master Key: An Electric Fairy Tale; The Navy Alphabet; The Sea Fairies; and The Songs of Father Goose.

Other children’s books in the sale include The Boy Fortune Hunters and The Flying Girl series, Sam Steele’s Adventures, and The Arabian Nights; plus a selection of ‘pop-up’ books, including Pinocchio and Jack the Giant Killer and Other Tales.

Books by other acclaimed authors, collected by Mr. Harris’s late wife Christine, include Jack London, A. Conan Doyle and Maurice Sendak. Among these highlights are noted A. A. Milne books: a fine first British edition of The House at Pooh Corner in the original dust jacket; The Christopher Robin Story Book; More “Very Young” Songs; and several editions of Now We Are Six. There are also Jack London books, including one that is signed. Some were in the personal collection of London’s younger daughter Becky, who lived in Glen Ellen and became a friend of Christine’s. Rounding out the sale are several other lots: several presidential books, including Memoirs by Harry S. Truman, two volumes, one signed; and George Herbert Walker Bush: A Photographic Profile; a rare W.W. Denslow 1905 Sunny Jim Doll; and stickers autographed by Ray Bradbury.

Turner Auctions + Appraisals begins its online auction on Saturday, September 26, 2020, at 10:30 am PDT; sale items are available for preview and bidding now. The auction is featured live on multiple platforms: LiveAuctioneers, Invaluable, Bidsquare, iCollector, and Turner Auctions + Appraisals’ free mobile app, which can be downloaded from the App Store or Google Apps ("Turner Auctions"). All are easily accessed through ‘Upcoming Auctions’ at the company’s website: www.turnerauctionsonline.com/upcoming-auctions/.

Born, raised and living in the San Francisco Bay Area, Joel Harris received his Juris Doctor and Master of Business Administration degrees from California’s University of Santa Clara. He has been an estate attorney for 30 years and is a State Bar Certified Specialist: estate planning, trust & probate law. But his extensive professional career is even superseded by his personal hobby–a passion for collecting all things Oz that has lasted over 45 years.

This enthusiasm and quest was triggered very young–in about third grade–by his elementary school librarian, Ms. Nina Fohner, who introduced him to The Wonderful World of Oz. Between the story and the visuals, young Joel was hooked. When his school ran out of books in the Oz series to read, he cajoled his parents to drive to bookstores in search of new material.Mr. Harris notes he has “the collector gene,”entranced both then and now by reading old and beautiful books with colored illustrations, book plates and end papers. As he says, “the older they are, the prettier they are,” the more he likes them.

As Mr. Harris got older, he began to buy and sell Oz books, meeting book dealer sat his local recreation center and working for The Book Lady to set up her booth at book shows, for which he was paid in books.In fact, he self-financed his first trip to Europe in high school with proceeds from his Oz book dealings! Mr. Harris considers himself an “advanced collector,” noting that his hobby “is not at the normal level.” With Christine, he owned the Clayton Bookshop for many years, and has attended myriad book shows in the U.S. and abroad to enhance his collection.He was also a consultant to Storyopolis, a popular children’s bookstore in Southern California, now closed. Of particular note and pride is Mr. Harris’s invitation by the Antiquarian Booksellers' Association of America (ABAA) to showcase his personal Oziana collection at the 52nd California Book Fair, the annual show for dealers of rare and antiquarian books, when the organization commemorated the 100th anniversary of the death of L. Frank Baum in 2019.

Furthermore, as a member of the International Wizard of Oz Club for over 40years, Mr. Harris has been its Director of Special Publications for 20 years.As the program’s supervisor, he edited and published numerous special editions for the Oz Club–newer books that are limited editions of only 26 copies. These are designated for special purposes and members of the Oz Club, and are not available for outside purchase. Unlikely to have been offered previously at auction, some of these books are featured in the September sale, including The Wicked Witch of Oz and Toto of Oz. Mr. Harris built his Oz collection over many years, traveling to Europe, buying at auctions, and purchasing collections from Oz Club members and the organization’s private auctions.(Although he generally did not find much at estate sales, he notes that, during one recent Christmas, he came across books that sold for 25 cents. Digging through the offerings, he found a Harry Potter book with a J. K. Rowling autograph, Dan Brown books with a signed personal letter from Brown to the book’s former owner, and two custom copies of Eragon. For $20 he bought a whole tub of books –valued at over $5,000!)

Amassed over more than four decades, Mr. Harris’s collection reflects beautiful and special items that are unusual. As with all of us, COVID-19 has given Mr. Harris a lot of extra time at home: sheltering in place, he used the time to organize and curate his collection to prepare it for sale. Mr. Harris says he “pulled some treasures” from his collection and Christine’s for this auction. Fans of Oziana and Pooh are sure to be delighted!

Here are some highlights of the upcoming sale (see details in the online catalog):

Lot 106: The Christopher Robin Story Book by A. A. Milne, illustrated by E.H. Shepard. Dutton 1929 stated first edition, 1st US edition. Light blue boards lettered and decorated in gold. Original color illustrated dust jacket, back flap has ad for The House at Pooh Corner. Blue and white illustrated endpapers and illustrations throughout by Shepard. Very good to fine with a small dent in the spine, unclipped dust jacket is near fine with a few tiny chips and spots. Estimate$1,000-$1,500.

Lot 117: First Limited Edition of the First Winnie the Pooh Book, When We Were Very Young, by A.A. Milne, illustrated by E.H. Shepard. Dutton 1924 first US edition, 1/500 copies of the Special Limited Edition. Original illustrated boards backed in green cloth. Illustrated endpapers and illustrations throughout by Shepard. Original color illustrated dust jacket. Very good copy with a little age toning and fading to spine, spine corners rubbed. Inside is clean and tight. Fair dust jacket is heavily chipped, with nice inside panels.Estimate$1,200-$1,800.