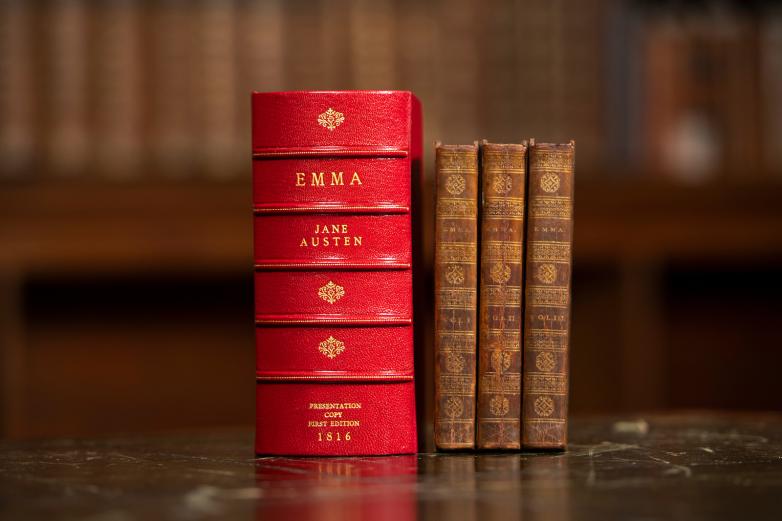 The three-volume edition -- with the handwritten inscription "From the author" -- will go on public display early next year at Chawton House after its American buyer decided that it should stay in the UK. Austen was a regular visitor to the former home of her brother Edward, now a research centre which houses a huge collection of early women’s writing.

It is the only presentation copy of an Austen novel with a written inscription known to exist. As was the custom, the book was actually inscribed by the publisher rather than Austen, though it was at the author’s request. It was then sent to her close friend Anne Sharp, governess to Edward’s children. No novel by Austen is known to have been inscribed by the author herself.

“Chawton House’s support of early women’s literature made it the perfect choice, as Anne Sharp served as confidant, cheerleader and sometime critic of Austen’s works,” said Pom Harrington, from the London rare book dealer Peter Harrington who sold the book and connected the American buyer to the historic house. "She was part of the intimate circle among whom Jane circulated copies of her novels and recorded their responses.”

All three volumes also bear Anne Sharp’s ownership signature. Under the terms of Anne's will, her books were bequeathed to Richard Withers of Liverpool and subsequently passed down through his family.

Jane Austen was allocated 12 special presentation copies of Emma by the publisher John Murray. Nine were sent to family members (including Jane herself), one to the librarian of the Prince Regent to whom the work was dedicated, one to Countess Morley at Saltram, and this one to Anne Sharp. An additional copy was bound at her expense in red morocco gilt for the Prince Regent. This copy is still believed to reside at Windsor Castle, although it has never been publicly displayed.