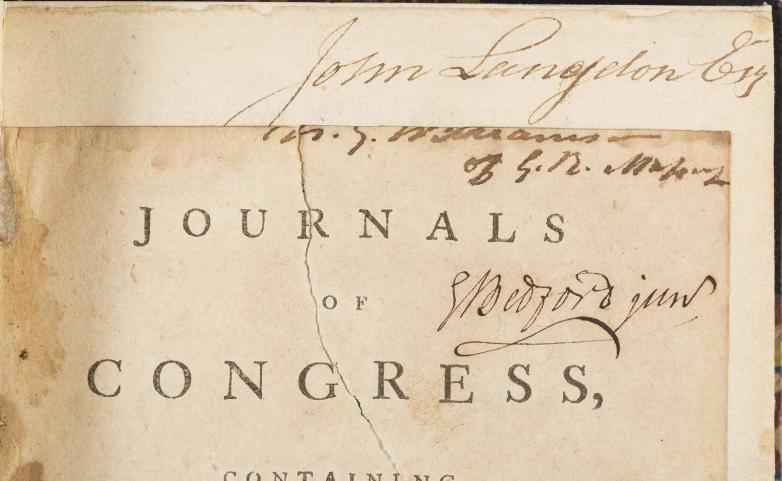 Volume III of the Journals of Congress, with the signatures of John Langdon and Gunning Bedford, Jr. Bidding begins at $10,000.

Heritage Auctions will hold its first Rare Books Signature sale of 2021, June 9–10. Among a wide range of books and works on paper, one of the most significant lots to come to auction during this sale is the complete 13-volume set of the Journals of Congress, which cover proceedings from 1774 to 1788.

“This set covers the first 13 United States congresses, including the two Continental Congresses and the Constitutional Convention,” said James Gannon, Director of Rare Books at Heritage Auctions. “It was put together by someone who was able to track down volumes from the private collections and personal libraries of Founding Fathers and Revolutionary War statesmen.”

The second volume, which covers proceedings from the year 1776, is signed by eminent founding statesman Roger Sherman.

“Sherman was a member of the Committee of Five, along with Benjamin Franklin, John Adams, Robert Livingston and, most famously, Thomas Jefferson, tasked by the Second Continental Congress with drafting the Declaration of Independence. He was the only person to sign all four founding documents of the nation—the Continental Association, the Declaration of Independence, the Articles of Confederation, and the Constitution,” Gannon said. “He also served as the first mayor of New Haven, Connecticut, as a Justice of the Superior Court of Connecticut, and as a U.S. representative and senator from Connecticut.”

Other volumes include signatures from other notable early American figures such as Peter du Ponceau, secretary and aide to Baron von Steuben; Samuel John Atlee, a colonel in the Revolutionary War and member of the Continental Congress from Pennsylvania; and Richard Rush, the eighth U.S. attorney general, the eighth Secretary of the Treasury, running mate to John Quincey Adams in 1828, ambassador to Britain and France, and son of prominent founding father, Dr. Benjamin Rush.

The set last sold for $7,500 in 1977, but as values and inflation have risen, bidding for the volumes will begin at $10,000 in a live and online auction, though no bidders will be present in the room.

“To find so many signatures of this caliber in one set is exceedingly rare,” Gannon says. “Something like this only comes along once every three or four decades and it is gratifying to be able to show it to our bidders. It is essential for them to know that important primary materials are still available for private collections. Not all are housed deep in the holdings of major institutions.”