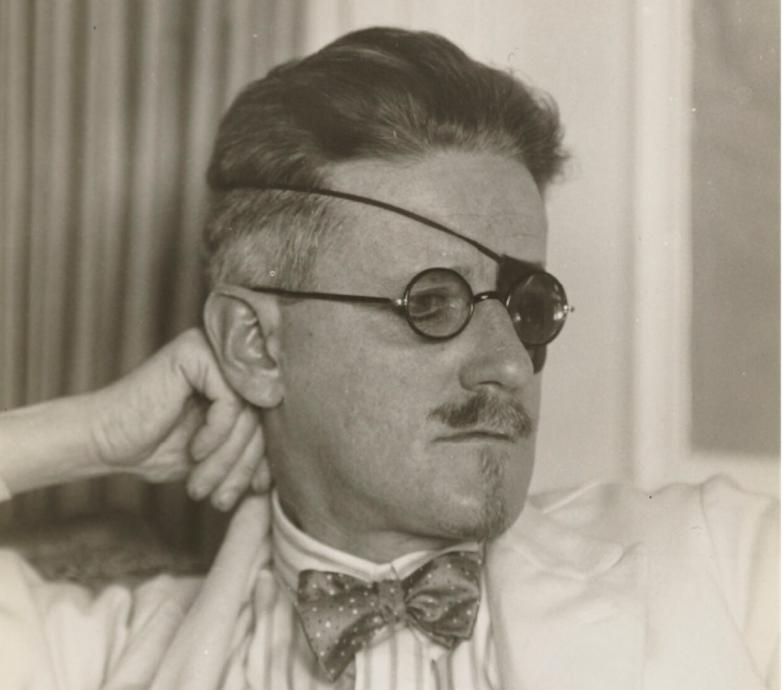 Having immersed myself thoroughly in various activities of this year’s Ulysses centennial, I came to the New York International Antiquarian Book Fair hoping to see a lot of Joyce – in particular, a copy of the prospectus for Ulysses publisher Sylvia Beach put out for her Shakespeare & Co.’s 1922 first edition. While I didn’t find a prospectus, I was not disappointed.

James Cummins Bookseller (booth A4) has an original of the Camille Ruf photograph of Joyce that Beach used for the prospectus. The photograph is inscribed by Joyce to John Quinn in 1921, prior to the 1922 publication of the book. (This item sold as soon as the fair opened.) Quinn, the New York lawyer who defended Ulysses in court against obscenity charges, was a great patron of writers and artists; through that patronage he amassed an impressive collection.

Cummins also has something you’re unlikely to see anywhere else – Joyce’s earliest appearance in print. Joyce was 18 when “Ibsen’s New Drama,” his glowing review of Ibsen’s “When We Dead Awaken,” appeared in The Fortnightly Review in 1900. Joyce learned enough of the language to write to Ibsen in Dano-Norwegian the following year, and to read his works in the original.

I loved seeing Joyce’s work appear in this context, between an essay on Moliere and an article on “The Next Agricultural Census.”

Cummins also boasts a pristine example of the first edition in its fragile blue wrappers, which were given to browning. More on that in the Ulysses round-up below.

A year after “Ibsen’s New Drama” appeared, Joyce self-published his essay “A Day of the Rabblement” in a pamphlet shared with “A Forgotten Aspect of the University Question” by his friend F. J. C. Skeffington – their university newspaper having rejected both pieces. Joyce here advocates for freedom of expression in the Irish theater. Peter Harrington (booth B15) has a nice copy, with the creases showing how it was folded for distribution to their classmates’ letterboxes. (£12,500) 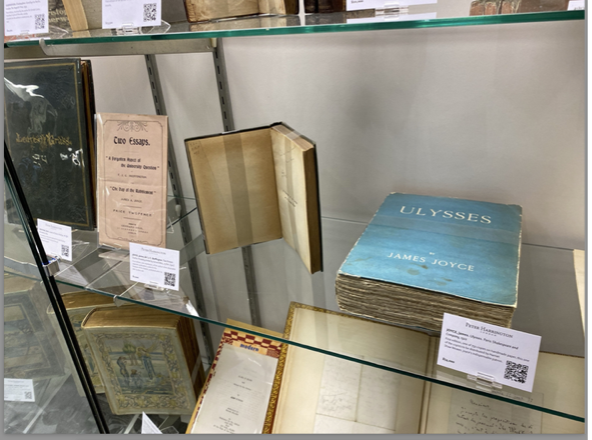 Also at Harrington: A beautiful 1927 first edition of Pomes Penyeach from Shakespeare & Co., in as bright an absinthe green as we’ve seen as it is prone to fading and browning. (£1,500)

A first edition – Shakespeare & Co., 1929 – of Our Exagmination Round His Factification for Incamination of Work in Progress, the earliest critique of Work in Progress while it was in progress, published as a fundraiser for Joyce. It contains Samuel Beckett’s first appearance in print, with “Dante... Bruno. Vico… Joyce,” which opens the book. This copy is from the library of Jewish-American novelist John B. Sanford, best-known for his own experimental fiction; with Sanford’s blindstamp, and with his ownership signature using his given name “Julian L. Shapiro,” Madrid, April 4th, 1931. (£1,250)

For a fun copy of A Portrait of the Artist…, visit Type Punch Matrix (booth A35). There you’ll find a modern paperback belonging to English singer-songwriter Amy Winehouse. If you would like to own that copy, however, you will have to purchase all 225 books from Winehouse’s library catalogued by TPM. According to cofounder Rebecca Romney, “This is a collection that deserves, as much as possible, to stay together. Not only because they speak biographically about Winehouse’s life, but also because they speak to her work as an artist and as a writer.” ($135,000)

Jumping ahead a decade from “Ibsen’s New Drama,” Triolet Rare Books (booth D22) has “Gas from a Burner,” Joyce’s 1912 broadside satire composed after the publisher of Dubliners rescinded his contract and the printer destroyed nearly every copy. ($55,000)

There's also a beautiful, bright orange copy of Storiella as She Is Syung (first edition of this section of Work in Progress, which later became Finnegans Wake, one of 175 copies published by Corvinus Press, 1937, $6,500); Tales Told of Shem and Shaun (first edition, again a section of Work in Progress, this one published by Black Sun Press in1929, with a frontispiece symbolic “portrait” of Joyce by Brancusi, $2,250); Pomes Penyeach (first edition published by Sylvia Beach at Shakespeare & Co. in 1927, $450); and The Dead (1982 fine press edition, one of 150 copies published for sale by Duval and Hamilton, 170 copies the entire edition, $1,500).

To hear Joyce read from Anna Livia Plurabelle – another section of Finnegans Wake – stop by Shapero Rare Books (booth E3), where you’ll see a record produced by the Orthological Institute in Cambridge, England, in 1929; to listen you’ll have to bring your own record player. ($1,500) You can read it as you listen, as Shapero also has copy #3 of 6 copies that were for sale of the 50 copies in total printed on light green paper by Crosby Gaige in 1928. This copy bears the bookplate of one Esther Hawley. ($4,700) The copy of Finnegans Wake behind it is one of 425 copies, Faber 1939, and includes the 16-page leaflet “Corrections of Misprints in FINNEGANS WAKE.” ($11,400) 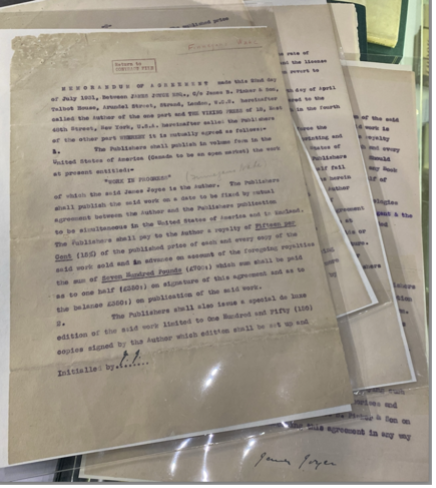 Jeffrey H. Marks Rare Books (booth B21) has the original contract between Joyce and Viking Press for the 1939 American edition of Finnegans Wake – still called in this contract, “Work in Progress,” signed and multiply initialed by Joyce. ($65,000)

The Old New York Book Shop (located in Atlanta, Georgia and here in booth A22) has a neat copy of the Viking edition, in the dust-jacket – a copy Joyce purchased in Zurich in the summer of 1939, shortly after its May publication, and then sent from Brittany to a friend back in Zurich. Joyce’s handwritten return address on a bit of the original shipping packaging is affixed in the rear of this copy, thus: “Envoie de J. Joyce / Hotel Saint Christophe / La Baule.” ($12,500)

It wouldn’t be a Fair for me without a stop at Maggs Bros Ltd. (booth E2). There I was a greeted by a letter Joyce wrote in French to the publisher of a French translation of his Dubliners story “Araby,” discussing among other things the translation of the word “desire,” as it appears in this sentence: “All my senses seemed to desire to veil themselves and, feeling that I was about to slip from them, I pressed the palms of my hands together until they trembled, murmuring: ‘O love! O love!’ many times.” Joyce mistakenly dated the letter January 17, 1921, though he wrote it in 1922 – a slip to which all are prone, as one year turns to another. In this instance, Joyce’s gaffe inadvertently masks that he was writing just weeks before the publication of Ulysses. (£10,000)

Maggs also has a lovely copy of the first edition of Ulysses published in England – by The Bodley Head – copy #38 of 100 copies on handmade paper, in the vellum binding designed by Eric Gill with a Homeric bow in gilt on the cover and in the original cardboard slipcase. (£35,000)

Early visitors to Peter Harrington’s booth were able to see something truly remarkable: Joyce’s final presentation. It was a second printing of a 1932 copy of Dubliners, from the Albatross Modern Continental Library Volume I, which he inscribed in green ink “To Gustave Zumsteg, James Joyce Zurich 4.1.1941”. The son of Hulda Zumsteg, the owner of Joyce’s favorite Zurich restaurant, “Kronenhalle,” Gustave lived in Paris from 1936 as designer for a silk trading company, and was instrumental in securing Joyce’s return to Zurich from Paris in December 1940. Harrington pointed to the Ellmann biography of Joyce to support this as Joyce’s final inscription: When Joyce and his family arrived in Zurich, Joyce had “arrived broken and sick, prematurely aged.” He dined on January 8, "as often, at the Kronenhalle, where the Zumstegs had often been kind to him, and afterwards he remarked casually to Frau Zumsteg over a bottle of Mont Benet, ‘Perhaps I won’t be here much longer’... Two days later, on Friday, January 10, he came again to the restaurant.” He fell ill that evening, was operated on the next morning, and died on January 13.

The First Edition of Ulysses

The covers were in the blue of the Greek flag, with drop out white lettering. They are fragile and prone to browning with time and whitening at the edges with wear. There are always several copies at the NY book fair, in a range of condition and at a range of price points. I’ve focused below on copies that stand out and I hope you will enjoy the hunt for more!

As mentioned, James Cummins’s copy wins for condition: copies this bright are available with less and less frequency.

Harrington has a slightly less attractive copy, but one with a nice history: it is copy #823 which he has tracked, through the 1996 census published by Glenn Horowitz Bookseller, to the collection of copies allocated to Joyce’s great patron Harriet Shaw Weaver to sell. ($74,000)

Lucius Books (booth C22) has copy #723. It would not be unusual for contemporary buyers to have their book rebound in their own library binding; in this instance, it is Lucius Books who has commissioned a binding, from acclaimed British binder Stephen Conway. Conway has interpreted the text into its covers with imagery of a clock to suggest Joyce’s organization of Bloomsday – June 16, 1904 – into episodes mapped to various times of day. This copy is unusually nice as the original covers, still quite bright and lovely, have been preserved and bound-in in the front and rear, along with the four-page “Extracts from Press Notices” prepared by Sylvia Beach. (£18,500)

Temple Rare Books / Temple Book Binders of Oxford (booth A33) has a 1927 9th printing of the first edition, bound in a 1981 abstract binding designed by Sally Lou Smith, inspired by the Dublin skyline at night. This copy is inscribed by Joyce to H.G. Wells: “To H.G. Wells respectfully James Joyce 5 November 1928 Paris.” The addition of “respectfully” lands this among the more verbose Joyce inscriptions I have seen. Joyce had with Wells – as he did with many writers, critics, and friends – a rocky relationship. It began with Wells’s high praise in print for A Portrait of the Artist as a Young Man, but ended with his gracious but adamant bafflement with Joyce’s “literary experiment” as seen in Ulysses and, ultimately, Finnegans Wake. (£45,000)

Saving the best for last 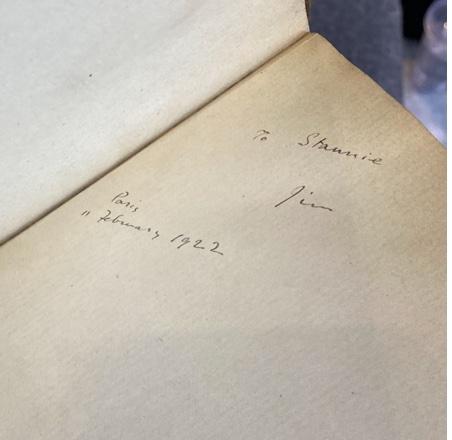 Joyce inscribed this copy of Ulysses to his brother Stanislaus.

It is difficult to overstate the volumes contained in those few words – and in the place and date – “Paris / 11 February 1922,” soon after Joyce had himself received the first two copies off the press on February 2. Though even the most significant institutional copies of Ulysses inscribed by Joyce take this brief format, only one of those is signed “Jim,” a nickname Joyce reserved for family members. Manhattan Rare Book Company (booth C10) proprietor Michael DiRuggiero noted that Joyce only inscribed ten numbered copies in February 1922, the month of publication. Of those, the only one inscribed by Joyce earlier than the 11th was the one he presented to his wife Nora Barnacle, a copy long since lost. Of those known copies, one other is in private hands, leaving this copy inscribed to Stannie as the most meaningful available copy of Ulysses inscribed by Joyce. ($1.5 million)