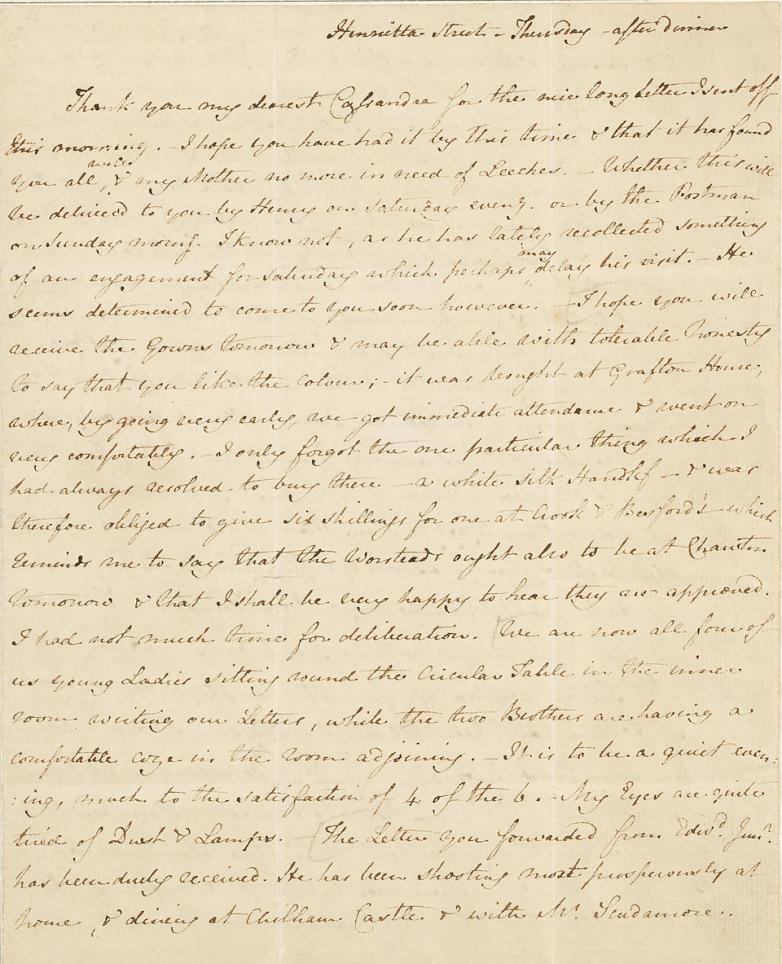 A letter written in 1813 by Jane Austen to her sister heads to auction.

A revealing, four-page letter written by Jane Austen to her sister Cassandra will go to auction in New York on October 23. Cassandra was the author's most frequent correspondent, and this letter, written on September 16, 1813, covers a range of intimate, familial subjects, from china patterns to health issues. “The letter throughout is full of lively detail, wit and charm, vividly echoing the world she deftly portrayed in her novels,” according to Bonhams.

Some of the most interesting parts of the letter contain Austen’s comments on medical matters. Her mother, she reports, is “no longer in need of leeches.” Family friend Mrs. Tilson is “in the family way.” And her poor nieces, she recounts, visited the dentist; Lizzy’s teeth were filed, while Marianne’s were pulled: ”…we heard each of the two sharp hasty screams.” Austen goes on about the dentist, “I would not have had him look at mine for a shilling a tooth & double it.”

The auctioneer points out another neat fact about this particular piece of correspondence, namely Austen's use of the word “coze,” predating the word’s first recorded appearance (in her own novel, Mansfield Park, the following year). Austen writes, "We are now all four of us young Ladies sitting round the Circular Table in the inner room writing our Letters, while the two Brothers are having a comfortable coze in the room adjoining...."

Austen letters are rare on the market—this one has been in the Dodge Family collection since businessman and philanthropist Cleveland H. Dodge (1860-1926) purchased it at auction in 1909. Bonhams estimates that approximately 161 of her letters survive, “primarily in institutions.” This one is estimated to reach $80,000-120,000.