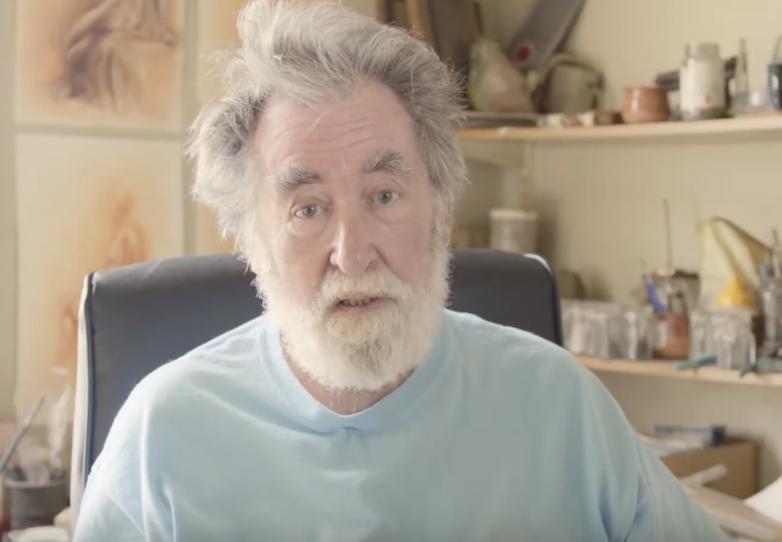 Tom Phillips in his studio at home

Artist, composer, and writer Tom Phillips, who died on November 28 in London, worked in many creative disciplines. He is perhaps best known to readers of Fine Books for his book illustrations and in particular his cult classic A Humument: A Treated Victorian Novel, a work he described as his “strange labour.”

This was a work in progress since 1966 when Phillips bought a cheap secondhand book in London and began altering every page by painting, collage and cut-up techniques to produce a completely new volume. The book was the obscure 1892 A Human Document by W.H. Mallock. Phillips called his transformation A Humument and its first edition was printed by the Tetrad press in 1973.

Phillips continued to work on it and revise it throughout most of the rest of his life. Brooke Palmieri described the fifth edition in a book review for Fine Books as “a watershed in the latter-day history of artists' books inspired by Surrealist methods in cutting, pasting, and heavy duty reassembly and collage.” The sixth and final edition came out in 2016 published by Thames & Hudson, itself a complete transformation of his first. According to Phillips, he worked on that original copy of A Human Document without destroying any of its pages and it is now held by the Sackner Archive, still in its original binding. You can read his own bibliographical history of the book on his personal website.

Among the various books he wrote was The Postcard Century, a history of the 20th century using 2,000 postcards and the messages written on them. More recently, readers will be familiar with his work for The Folio Society editions of Tristram Shandy by Laurence Sterne, and T.S. Eliot’s The Waste Land, the latter published in October 2022.