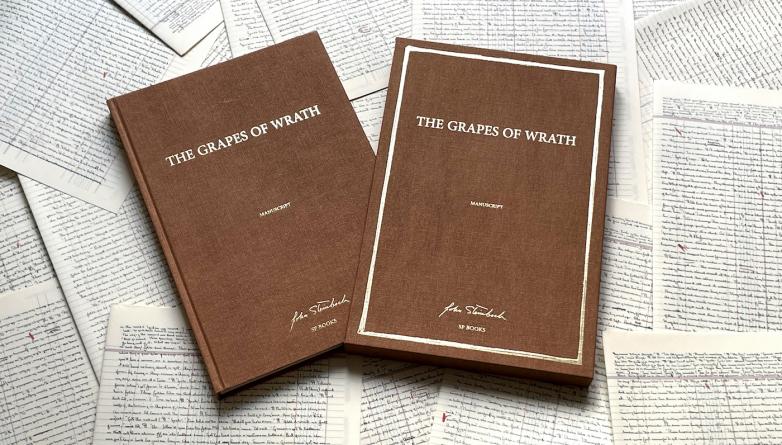 With this edition, readers can examine Steinbeck’s minuscule—and astonishingly neat—handwriting, as well as his first wife Carol’s proofreading marks. (According to SP, Steinbeck’s agent also required him remove a dozen instances of the f-word.)

Perhaps feeling the pressure to produce another bestseller—he had already won acclaim for Tortilla Flat and Of Mice and Men—Steinbeck began the Grapes manuscript with the momentous words, “New Start.” Around that time, he confided in his diary, “This must be a good book. It simply must. I haven't any choice. It must be far and away the best thing I've ever attempted—slow but sure, piling detail on detail until a picture and an experience emerge.”

Over five months of intense writing in the summer and early fall of 1938, he filled two oversized, lined ledgers (combined into one large-format volume here). On October 26, he wrote “END” just below the novel’s final line: “She looked up and across the barn and her lips came together and smiled mysteriously.”

The SP edition, limited to 1,000 numbered copies on deluxe paper and presented in a handmade slipcase, is available now for $260.