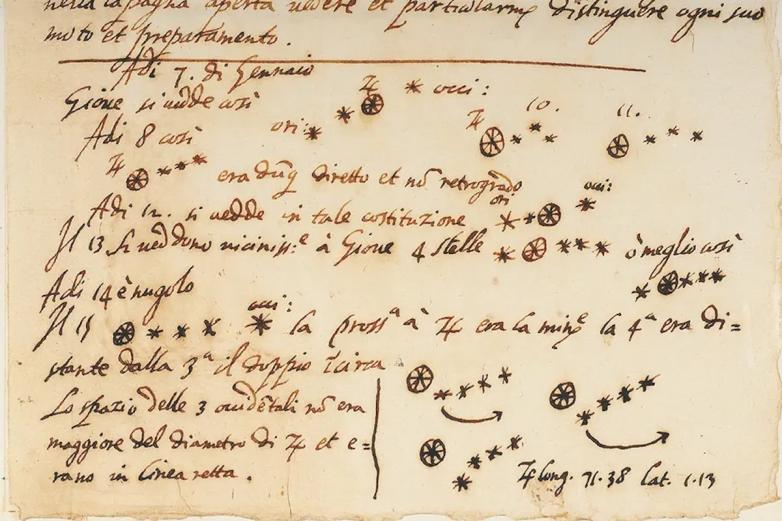 Courtesy of the University of Michigan

Annotations recording Galileo's discovery of the four moons of Jupiter, from the single leaf manuscript in the University of Michigan Library’s collection once believed to be dated 1610.

The University of Michigan (U-M) Library announced last week that its 1610 Galileo manuscript—“for almost a century considered one of the jewels of the library’s collection”—is indeed a twentieth-century forgery.

The revelation comes after an internal investigation stemming from the research of Nick Wilding, a professor of history at Georgia State University, who also famously detected a faked copy of Galileo’s Sidereus Nuncius (Starry Messenger) in 2012. On Michigan’s Galileo manuscript, the letterforms and uniform ink raised questions in Wilding’s mind, so he reached out to their special collections to scrutinize them further.

The one-page manuscript, once believed to have been Galileo’s handwritten recording of his telescopic observations of the moons of Jupiter, has been in U-M’s collection since 1938 when a Detroit businessman bequeathed it to the university. It had been offered at auction only four years prior, when Anderson Galleries sold the library of collector Roderick Terry. The auction catalogue noted that the document had been authenticated by Cardinal Pietro Maffi, archbishop of Pisa, by comparing it to manuscripts in his own collection. But those manuscripts, Wilding uncovered, had been supplied by a well-known early twentieth-century forger named Tobia Nicotra. As Wilding told the New York Times, “As soon as I heard the word ‘Nicotra,’ I got the little ‘Spidey sense.’”

Further investigation into the paper’s watermark—which indicated that it could not have been produced before 1770—sealed the deal.

U-M Library officials are now reassessing the document’s place in its collection. “In the future, it may come to serve the research, learning, and teaching interests in the arena of fakes, forgeries, and hoaxes, a timeless discipline that's never been more relevant.”