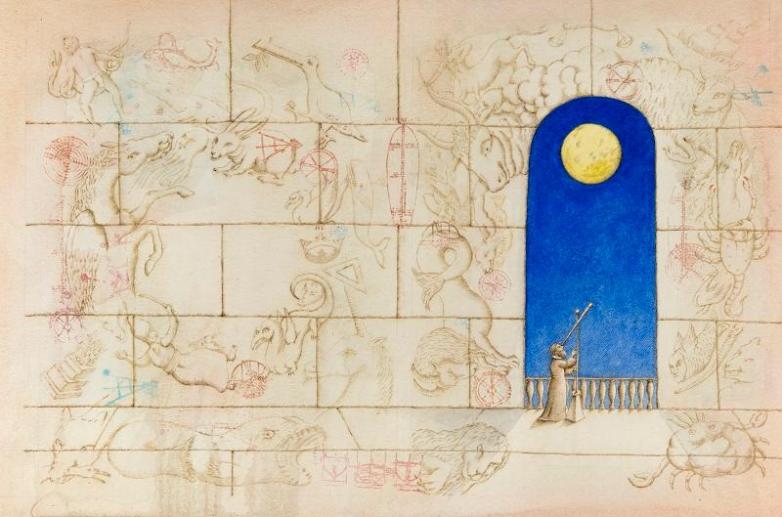 Amherst, MA — Peter Sís invites readers on incredible journeys. His exquisitely detailed picture books follow the historic adventures of French pilot Antoine de Saint-Exupéry and Czech arctic explorer Jan Welzl, while others herald the scientific discoveries of Galileo Galilei and Charles Darwin. Fueled by his life experiences, Sís transports readers to the ancient city of Prague in The Three Golden Keys and explores its political past in his autobiography The Wall: Growing Up Behind the Iron Curtain. He chronicles his father's two-year Himalayan voyage in Tibet Through the Red Box, and creates a modern-day fairytale in Madlenka. The Eric Carle Museum of Picture Book Art is pleased to present The Picture Book Odysseys of Peter Sís, on view from June 8 to October 27, 2019. This exhibition celebrates the artist's contributions to children's literature over 30 years, showcasing original illustrations from 26 picture books, as well as a selection of Sís's editorial illustrations, public art projects, and unique painted objects.

Born in Brno, Czechoslovakia in 1949, Sís's formative years and early career as a film animator in Prague came at the height of the Cold War and Soviet totalitarianism. In 1982 he sought asylum, and eventually citizenship, in America. Unsurprisingly, Sís's books embody the principles of freedom and the autonomy to transcend borders, both physical and political.

Sís shares memories of his youth in a remarkable trio of picture books. His most personal narrative, The Wall: Growing Up Behind the Iron Curtain (2007), illustrates life in Czechoslovakia under communist rule. Sís balances black-and-white scenes of secret police and quelled uprisings with family photographs and painted dreams of freedom. The Three Golden Keys (1994) is a surreal return to the artist's childhood in Prague. Famous landmarks reveal Czech legends and golden keys that unlock the door to the artist's family home. As a young boy, Sís was enthralled by the tales of his father, a filmmaker who traveled the world and shared stories of the places he had seen. The mystical Tibet through the Red Box (1998) chronicles his father's nearly two-year odyssey lost in the Himalaya Mountains.

Sís's picture book biographies are multi-layered with timelines, maps, diary excerpts, and elegant hand-written text. His first picture book for adults, The Conference of the Birds (2011), is a breathtaking volume in which the birds of the world alight on a perilous journey in search of a king. The artist is currently at work on a new picture book about Sir Nicholas Winton, a London stockbroker who saved 669 Jewish children from Nazi persecution in Czechoslovakia on the eve of World War II.

Sís balances the sophistication of his biographies with original fairytales and playful early readers. His first picture book, Rainbow Rhino, was published in 1987. It is a dreamlike animal fable about longing and friendship, themes Sís also explores in An Ocean World (1992). The birth of his children Madeleine and Matej inspired an outpouring of new creativity with early reader titles like Fire Truck (1998), Ship Ahoy! (1999), Dinosaur! (2000), and Ballerina (2001). Sís illustrates these nearly wordless stories in simple graphic styles defined by bold outlines, ample white space, and limited colors.

Before and during his early career in children's books, Sís also worked as a freelance illustrator. He contributed more than 1,000 editorial drawings to The New York Times over 18 years. For the last two decades, Sís has dedicated himself to public art. He partnered with Amnesty International on the creation of a series of tapestries in support of universal human rights. Woven in Southern France, the enormous textiles adorn public spaces in Cape Town, Dublin, New York City, and Prague. Sís's three tapestries dedicated to the American Civil Rights Movement are currently touring the United States.

Sís's books span countries and continents, with translations in many languages. He has received dozens of top awards. The American Library Association has honored him with three Caldecott Honor awards. In 2003 he became the first children's book artist to be named a MacArthur Fellow, and in 2012, he won the Hans Christian Andersen Medal, the prestigious international award for lasting contributions to children's literature. The Carle previously featured Sís's work in The Art of Eric Carle & Friends: What's Your Favorite Animal (2014), in which he drew a giant flying carp with three royal cats bearing gifts on its back. Sís was also the featured speaker at The Carle's annual Barbara Elleman Research Library Lecture in 2013.

This exhibition is made possible with generous support from Macmillan Children's Publishing Group.