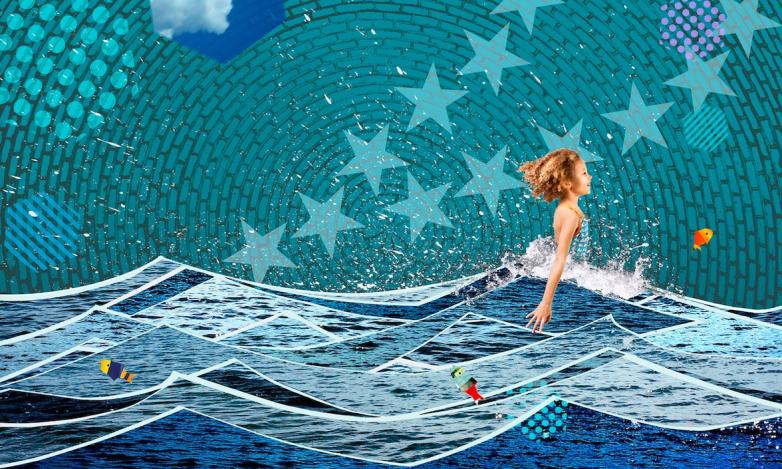 Nina Crews, Illustration for A Girl Like Me by Angela Johnson (Millbrook Press).

As readers, parents, and bibliophiles, we at Fine Books have always been great fans of Eric Carle (1929-2021), and we were lucky enough to connect with him in our winter 2019 issue when his stupendously famous picture book, The Very Hungry Caterpillar, turned fifty.

Now for another milestone: the Eric Carle Museum of Picture Book Art, which the author/illustrator cofounded with his wife, Barbara, is turning twenty. The 43,000-square-foot facility in Amherst, Massachusetts, has served nearly one million visitors since its opening in fall 2002 and houses more than 11,000 objects, including 7,300 permanent collection illustrations.

The term collage derives from the French word “coller,” meaning to stick or glue. For over fifty years, this was Carle’s medium of choice, creating his picture book illustrations from cut and torn painted tissue paper. “My painted papers are like my palette, and some have become works of art in themselves,” he told us back in 2019. One of Carle’s never-before-exhibited collages of the Very Hungry Caterpillar, which he made at age ninety, is part of the new exhibition.

For most artists, it’s the tactile and transformative properties that draw them to collage. Oge Mora said collage reminds her of the special things in life. “What I find irresistible about collage is how it reveals the ordinary as extraordinary. Everyday items like an old newspaper, a faded magazine, or the inside of an envelope, when cut just right, become special and profound,” she commented in a press release. Nina Crews values the technique’s variations: “Collage is playful. Collage is disruptive. Collage is an aggregation of materials and meanings. It is a great storytelling tool that challenges the viewer to make unexpected connections. It excites the mind and eye.”

Celebrating Collage opens on June 25—on what would have been Carle’s 93rd birthday—and will remain on view through December 31, 2022. Many other special anniversary activities are planned for the rest of the year. Check out the schedule here.