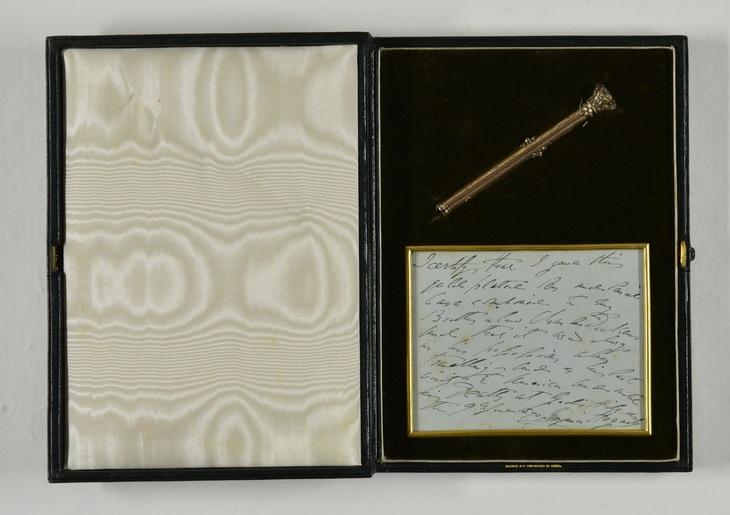 The Charles Dickens Museum in London acquired a large private collection that includes such items as the author's golden writing implement.

The Charles Dickens Museum in London has acquired a substantial private collection of Dickens material from the U.S., including 144 handwritten letters by the author (25 of which are unpublished); personal items including writing implements and jewelry; original artwork by the illustrators of Dickens’ books, including George Cruikshank, John Leech, Hablot Knight Browne (Phiz), Joseph Clayton (Kyd), and Frank Reynolds; 50 unpublished manuscripts and letters written by others in Dickens’ circle; and 25 books from Dickens’ own library.

Among the letters are Dickens’ instructions for a secret gin punch stash to be kept under the table for his private use during a dinner party, details of his family life including his wife Catherine’s miscarriage, and an account of how Dickens and Wilkie Collins got lost up a mountain during a walking tour of Cumberland. There are also rare unpublished letters from Charles’ father, John, and an exchange between Dickens and a fan, Emmey Gotschalk.

The collection includes the family’s home magazine the “Gad’s Hill Gazette,” a handwritten manuscript excerpt from David Copperfield, personal effects including a golden writing implement which doubles as both a pen and a pencil, and a collection of 40 playbills, including very rare notices for private performances at Dickens’ home. A set of household account books from Gad’s Hill Place begins in April 1866 in Dickens’ hand but is completed shortly after his death by his sister-in-law and housekeeper, Georgina Hogarth.

Cindy Sughrue, director of the Charles Dickens Museum, described the collection as “a treasure trove.” Mark Dickens, great-great-grandson of the Victorian author and chair of the board of the museum, commented, “This quite staggering material brings us even closer to the man himself, his character, feelings, family and friends.”

The acquisition was funded by a grant of £1.22 million from the National Heritage Memorial Fund, together with substantial contributions from Art Fund, Friends of the National Libraries, and the Dickens Fellowship, totaling £1.8 million, or about $2.3 million.