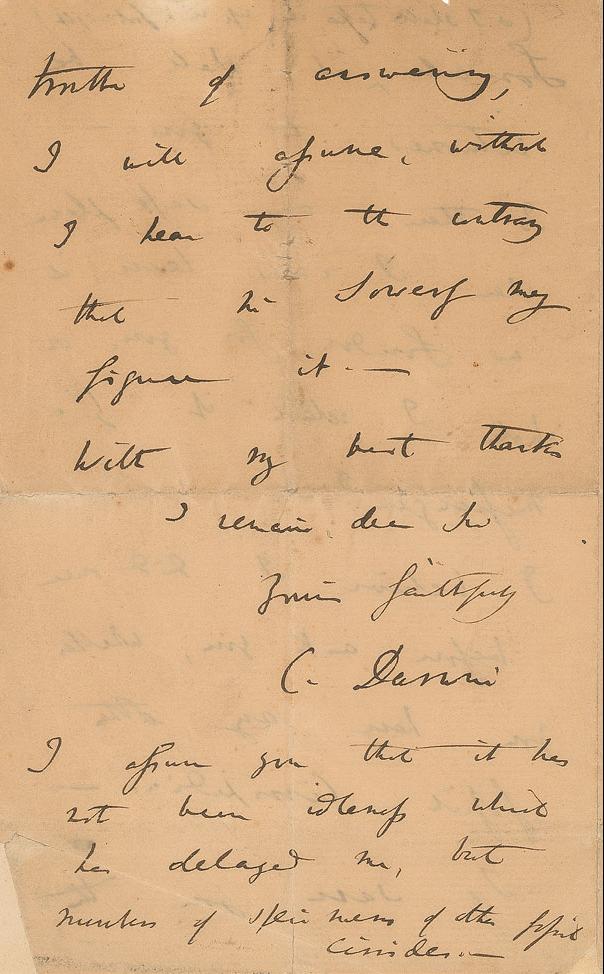 Charles Darwin letter requesting a sketch of a barnacle fossil.

Boston, MA — Boasting nearly 1,000 lots in a variety of genres, RR Auction's June Fine Autographs and Artifacts sale is highlighted by a Science and Technology section with online bidding until June 12.

Highlights include a Charles Darwin letter requesting a sketch of a barnacle fossil.  The four-page handwritten letter signed "C. Darwin," from August 8, 1850. Letter to Nathaniel Thomas Wetherell, underscoring Darwin's belief in the scientific significance of the study of Cirripedia (barnacles).

During the period of 1846 to 1854 Darwin spent time studying barnacles (Cirripedia), publishing a monograph entitled Living Cirripedia in 1851. We are able to date this letter precisely because August 1850 was the only month with a "Thursday 8th" in the period between the Palaeontographical Society's decision to publish Fossil Cirripedia and the publication of the first volume of this work in 1851, in which Loricula pulchella is described. James de Carle Sowerby drew all the figures of the specimens in the first volume of Fossil Cirripedia.

At the time of writing, Darwin does not seem to have known that George Brettingham Sowerby, Jr., had described and figured this particular specimen in 1843. However, since that time Wetherell had cleared away more material from the specimen, revealing features not seen by G. B. Sowerby, Jr., and a new drawing was made for Darwin's description (Fossil Cirripedia (1851): 81). Published by the Darwin Correspondence Project, University of Cambridge. (Estimate: $15,000+)

Also featured is an Albert Einstein letter on the topic "Geometrization." The one-page letter in German signed "A. Einstein," postcard letterhead, April 1926. Letter to Hans Reichenbach in Stuttgart, Germany, concerning Reichenbach's recent work on geometrization of the magnetic field as well as his criticism of Hermann Weyl's similar theory.

At the time of this letter, Reichenbach and Einstein were communicating about the former's construction of a theory establishing a connection between electricity and geometry, which he hoped would prove as effective as that of general relativity connecting gravitation and geometry. Reichenbach concluded, however, that his theory was less successful than that of general relativity, and he informed Einstein in a prior letter that based on his experiments, evidence proved that geometrization of a physical field could not be considered a significant advancement. In this letter, Einstein appears to agree with Reichenbach, while at the same time criticizing Hermann Weyl's own theory on geometrization of the electromagnetic field. (Estimate: $20,000+)

Along with a Lunar Module rotational hand controller. This hand controller would be used for controlling the Lunar Module's attitude: the handle pivots at the palm for pitch up/down, through the center of the handle for yaw, left/right, and inside the housing for roll left/right. These three-axis controls for pitch, roll, and yaw were vital for successfully maneuvering the spacecraft to and from the lunar surface, and for rendezvous and coking with the Command Module on the return home. A significant and easily recognizable piece of iconic Lunar Module hardware. (Estimate: $50,000+)

The Fine Autographs and Artifacts Featuring Science & Technology from RR Auction will conclude on June 12.  More details can be found online at www.rrauction.com.

RR Auction is a globally recognized and trusted auction house specializing in historical autographs and artifacts.