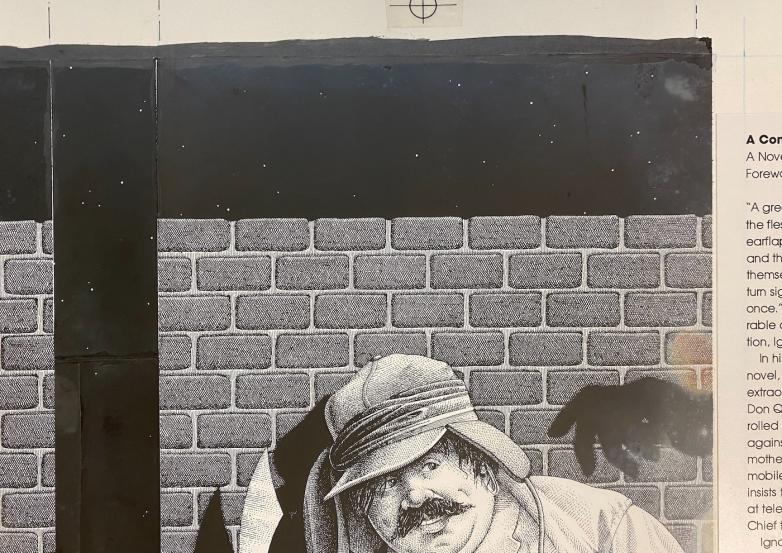 Courtesy of Patrick Mullins of The Rare Book Company

Original mechanical used for the first printing of the dust jacket of A Confederacy of Dunces, showing the ’star effect’ by illustrator Ed Lindlof.

Earlier this fall, bookseller Patrick Mullins of The Rare Book Company in Grottoes, Virginia, wrote to share some exciting news for collectors of modern firsts, particularly those interested in the 1981 Pulitzer Prize winner, A Confederacy of Dunces by John Kennedy Toole.

Since publication, Mullins explained, it has been assumed by book collectors that in order to distinguish between a first state and second state dust jacket of this title, you just had to look at the blurbs. On the first state dust jacket, only Walker Percy appears; on the second, media reviews had come in and been added to the rear panel. The book’s dust jacket art shows a band of black 'sky' across the top of the front panel, in which the title appears. Below that is an illustration of main character Ignatius J. Reilly standing in front of a brick wall.

But something about the dark sky had long puzzled Mullins. “While handling many first printings over the years, I noticed that they have small spots at the top panel, rear panel, and spine. Dealers and collectors always dismissed this as a printing error (perhaps dust caught during the printing process) or rubbing of the black ink. I have been guilty of believing this too,” he said. “But I noticed that the spots are always in the same area, so it got me thinking about the possibility of them being put there intentionally, and maybe they are stars in a nighttime sky. Second printing dust jackets do not have the spots (stars) present.”

Mullins reached out to James Wilson at LSU Press, who checked the company’s archives and found the original drawing made for the jacket, which confirmed the presence of stars. Wilson also found a letter from then production manager Joanna Hill to dust jacket illustrator Ed Lindlof discussing the need to remove the stars for the second printing. “By intentionally removing the stars and intensifying the color, she created the new state dust jacket that has been discovered,” Mullins said.

What a fun bibliographical rabbit hole! For more details on what Mullins dug up during his discovery, visit his website at: therarebookcompany.com/pages/press/4/first-edition-points-a-confederacy-of-dunces.