Collection of Manuscript Maps of Manhattan Comes to Sale 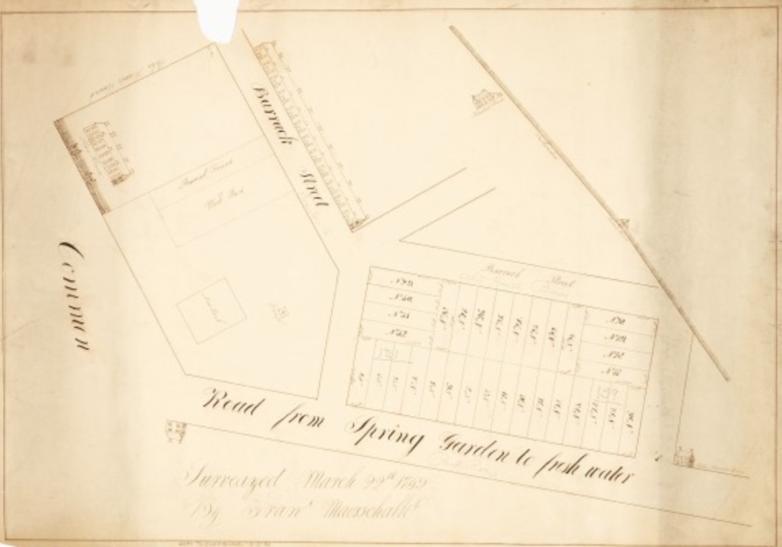 New York - Doyle is honored to offer the Collection of a New York Surveyor in a timed auction closing on Friday, December 16, 2022 at 10am. This fascinating collection of manuscript maps of Manhattan tracks the changes of the developing city from 1750-1850. The Collection will be offered as a featured section comprising lots 1 - 51 of the Rare Books, Autographs & Maps auction.

The trove of early manuscript survey maps of Manhattan offered in the Collection of a New York Surveyor is superb and revelatory in many respects. There were few surveyors in Colonial and Federal New York, the earliest represented here all trained in Europe, and this intrepid group of City Surveyors tracked Manhattan's development. The island transformed into its current grid through population surges, topography changes and farmland transformations. Between 1750-1850, the period this part of the Collection covers, New York City went from a colonial outpost to a thriving metropolis. These maps beautifully illustrate the block-by-block expansion of Manhattan.

Early landowners play a pivotal role in the historical record. These maps reveal the first attempt made to lay out in uniform blocks large swaths of undeveloped land that belonged to Nicholas Bayard, Colonel Henry Rutgers, Peter Warren, Anthony Lispenard, Anthony Bleecker and, a generation later, John Jacob Astor. This collection focuses on early streets along Broad Way, the Bowery, Center Point Street and Burnt Mill Point on the East River, and the lands that made up the Rutgers, Bayard and Delancey Farms. On the West Side, wonderful maps show the plan to lay out the TriBeCa, SoHo, and Nolita neighborhoods. To make the maps more enjoyable to today's viewer, where old street names appear on the surveys  current names have been provided in the description.

The most prominent surveyor in New York City in the 1750s was Francis W. Maerachalk (d. 1776). This collection includes original and early copies of his work. The land that became City Hall was previously a large field known as the Commons. In the 1750s, British officials built a long street of military barracks at the Commons – the largest group of buildings Manhattan had known to that point. Francis Maerschalk's 1759 survey of Barrack Street is an important and rare piece of New York City history in this collection. The collection also offers several examples of survey maps by Joseph-Francois Mangin and Casimir Theodor Goerck, chronologically the next most important set of surveyors, known for their full survey of Manhattan island published in 1800. Survey maps of the Federal Period reflect the aesthetics of that era, exemplified by the fine work of 1800-1810 surveyor Charles Loss.

Efforts to develop a grid in Manhattan had early roots, beginning with the layout of streets around Trinity Church in the 1760s and the private development of the Rutgers, Delancey and Bayard farms into a grid of blocks with individual lots to be sold. Even though the city's charters over the decades allowed a Common Council to create new streets and sell land, it rarely did, allowing landowners to build roads to suit their needs. In the late 1790s, the Common Council hired Casimir Goerck and Joseph-Francois Mangin to survey the island and provide a map that might guide the creation of a grid. Goerck died of yellow fever before its completion, but Mangin handed the commissioners the map now known as The Mangin-Goerck Plan in 1799 (with a version engraved by Peter Maverick following in 1803). The Mangin-Goerck Plan plan suggested the island expand by landfill to the shores. The commissioners rejected this idea, though Mangin dreamily stated that the plan did not show the existing streets but presented the city "such as it is to be."

For roundabout reasons, the new survey ordered by the Commissioners did not commence until 1808, this time with surveyor John Randel, Jr. at the helm, a project that would consume over a decade – although his initial survey of the island was prepared by 1810. Randel’s survey showed the placement of hills, rocks, swamps, marshes, streams, ponds, houses, barns, stables, fences, footpaths, cleared fields and gardens. Randel then (more or less) overlaid the Mangin-Georck Plan over his own, and this time the commissioners accepted the suggestion. In 1811, the commissioners issued the printed survey, again engraved by Peter Maverick; however, surveyor William Bridges redrew the map, beat Randel to publishing, and commenced a longstanding controversy over the authorship of the work.

The collection includes examples of the rare work of William Bridges and his sons. With the grid established and the old estates starting to break up their lands, the city rapidly grew in the 19th century. At this time, very fine city surveyors George and later Edwin Smith provided original surveys of the changing city and painstakingly exact copies of earlier maps to preserve the work of earlier surveyors. The Smiths taught us much about the earliest division of land and highlighted the surveys of Bridges, Mangin, Goerck and Maerschalk. Truly a rare offering of discoveries, the Collection of a New York Surveyor offers a fascinating glimpse into the growth and development of New York City.