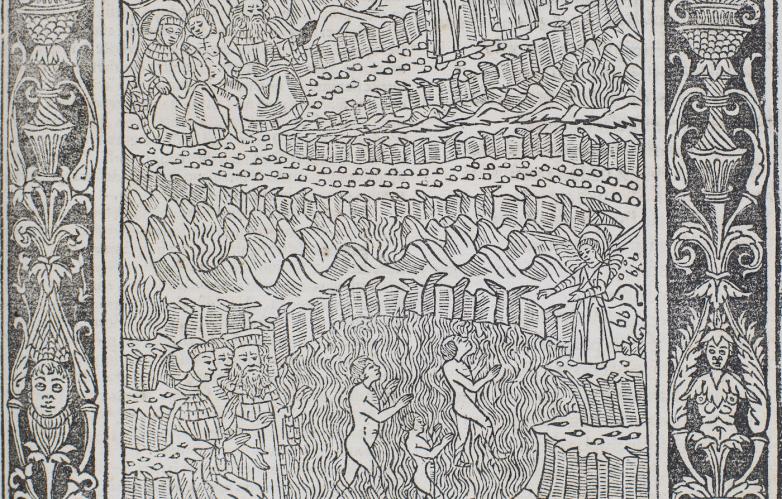 Boston — The Athenæum presents highlights from its special collections related to Dante Alighieri, celebrating a major anniversary of one of the great poets of world literature. A superb selection of historic and rare books will be on public view through December 30, 2021 on the Boston Athenæum’s first floor.

This year marks the 700th anniversary of the death of Dante Alighieri (1265-1321), the Florentine poet, philosopher, and statesman whose pioneering epic, the Divine Comedy, written in vernacular Italian, stands as a classic of world literature.

Dante’s work has endured and inspired through centuries as the foundational achievement of Italian literature. The Athenæum began acquiring copies of works related to Dante as early as 1819. Rare, unusual, and beautiful holdings include medieval printed editions as well as present-day translations illustrated by Boston-area artists.

New, later hours—until 9 PM on Tuesday, Wednesday, and Thursday nights—enable visitors to stop in after work or dinner.

Highlights of the installation include:

•    A 1487 illustrated edition of the Divine Comedy
•    An inscribed 1793 first edition of engravings by British neoclassical artist John Flaxman (1755-1826), a gift of the Earl of Camperdown in 1934
•    An 1843 volume, the first American translation of any portion of the Divine Comedy, by Boston Athenaeum Proprietor Thomas W. Parsons, Jr.
•    An 1867 publication, the first complete American translation, by Boston Athenaeum Proprietor Henry Wadsworth Longfellow
•    A letter from Longfellow to Elizabeth Chapman Lawrence, thanking her for the gift of fragments of Dante's coffin, which were displayed at the Boston Athenæum in 1872 and subsequently moved to their present location at Longfellow House
•    From the early twentieth century, rare privately printed Dante translations by Charles Eliot Norton (1930; one of 30 copies) and Eleanor Vinton Murray (1920)
•    Contemporary fine press illustrated editions by New England artists Roberta Delaney (1999; one of 15 copies) and Michael Mazur (2001; one of 25 bound copies; with translations by Robert Pinsky).