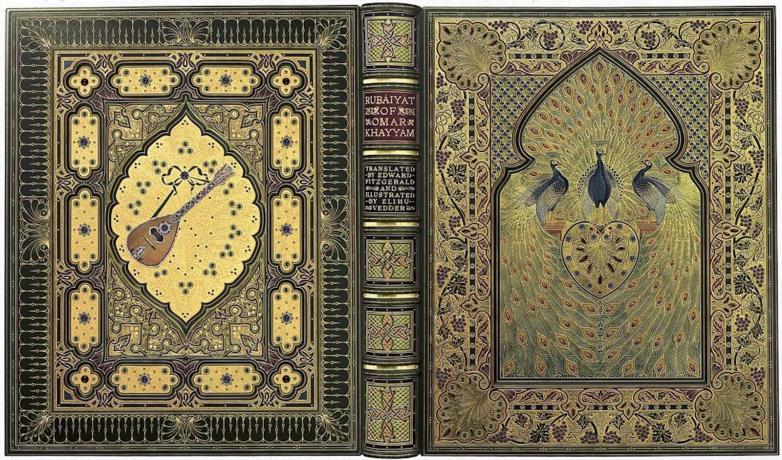 The 1911 Rubaiyat of Omar Khayyam with binding by Sangorski & Sutcliffe

While we concentrate at FB&C on rare books that are actually available, it’s a sad truth that some marvellous titles are no longer with us. Here’s a brief look at some of those we have lost over the last two centuries.

Lord Byron’s memoirs, diaries, and correspondence written between 1818 and 1821 were lost forever when the manuscript was burnt at the office of his publishers John Murray in Albemarle Street, London on. Murray and five of Byron’s friends took the decision because the two volumes were so scandalous. Copies of the 120,000-word work had been sent to various friends including Washington Irving, Lady Caroline Lamb, and Percy Shelley, and its general reception seems to have been that it was not really all hot stuff.

Nikolai Gogol burnt most of the second section of his novel Dead Souls. It’s not clear why – theories include unhappiness with its progress, worries about its potential irreligious aspects, and just plain accident.

50,000 books and the original manuscript of the Coventry Mystery Plays with the Coventry Carol were destroyed in a huge fire at Birmingham Central Library in England. Only a very small part of the manuscript collection was saved, including the 15th-century illuminated manuscript the "Guild Book of Knowle."

On its maiden voyage en route from Southampton to New York, the RMS Titanic sank after colliding with an iceberg. Among those who died at sea were American book collector and Grolier Club member Harry Elkins Widener who at 27 had already amassed an impressive personal library of 2,500 rare books. In a letter from March 10 to a friend, he said he was about to embark on the Titanic and had recently bought the complete set of original drawings for The Mystery of Edwin Drood from book dealer Bernard Quaritch in London. Another of his purchases, this one from J Pearson and Co, which went down with the ship was Heavy News of a Horrible Earthquake which was in the city of Scarbaria in this present year, a small pamphlet about a terrible disaster from 1542…

Books lost to the waters included the fabled The Great Omar, a sumptuous 1911 Rubaiyat of Omar Khayyam in a gold leaf and multi-jewelled binding by Sangorski & Sutcliffe, and a 1598 2nd edition of Sir Francis Bacon’s ‘Essays’ which Widener had just bought in London. Seven parcels of parchment of the Torah owned by Hersh L. Siebald were also among the Titanic cargo claimed as lost.

Poet Edna St. Vincent Millay took her only manuscript copy of her work in progress Conversations at Midnight on holiday to Sanibel Island, Florida. She checked in to the Sanibel Palms Hotel, had her luggage sent up to her room, and then went for a stroll on the nearby beach. When she looked round, the hotel was on fire and her sequence of poems went up in flames with it, along with her 17th-century edition of poems by Catullus. She started again from scratch and the book was published the following year.

John Steinbeck’s dog Toby ate most of the first draft of Of Mice and Men. Steinbeck described it as a “minor tragedy” and it set him back two months in the book’s writing. In a letter to his editor Elizabeth Otis, he added that he has made the Irish setter pup “lieutenant-colonel in charge of literature.”

Terry Pratchett was keen that his unpublished works remained so after his death in 2015. Consequently around 10 of his novels in progress were destroyed when, according to his own instructions to be implemented after his passing, they were smashed up by a steamroller and a concrete crusher at the Great Dorset Steam Fair in England. The remains of the hard drive went on show in the local Salisbury Museum.