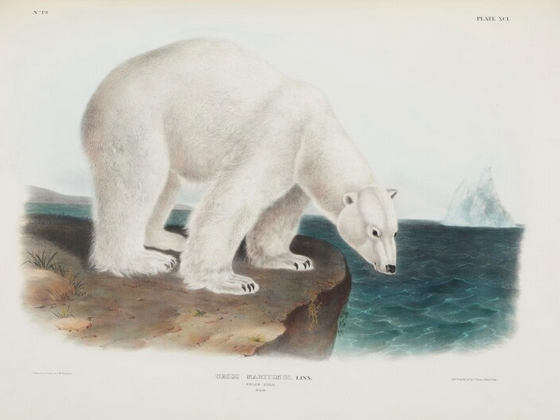 Audubon's polar bear, from his Quadrupeds offered at Sotheby's this week.

Ending on Monday, November 21, the Christie's Paris sale of Livres Rares et Manuscrits. The 267 lots include a first edition of René Descartes Discours de le méthode (1637) in a contemporary binding with the arms of bibliophile Louis Hesselin and Jean-Baptiste Colbert's copy of Blaise Pascal's Lettres a A. Dettonville (1659). Both are estimated at €100,000–150,000. Picasso and Reverdy's Sable Mouvant (1966), inscribed by Picasso to his doctor and with an original drawing by the artist could sell for €70,000–100,000. A working copy of the storyboard for Frank Herbert's Dune (1975) is estimated at €70,000–90,000.

Bonhams London holds a single-lot sale on Tuesday titled Scott of the Antarctic: An Heroic Farewell. Offered is the March 16, 1912 letter written by Scott to Sir Edgar Speyer, the first of Scott's farewell letters and the last remaining in private hands. It is expected to sell for £400,000–600,000. Written in and then torn from Scott's diary, this letter to his friend, the treasurer of his expedition, urges Speyer to ensure that the widows and children of the expedition's members be provided for.