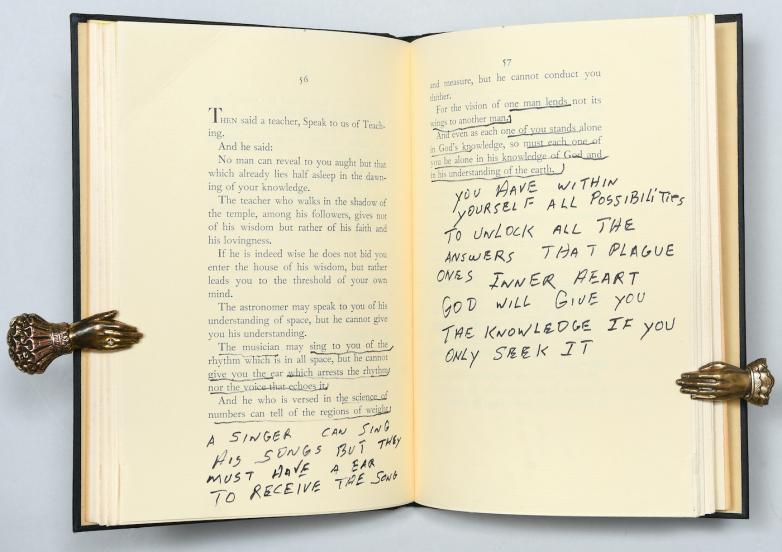 The summer catalogue from London’s Peter Harrington includes rock ’n’ roll legend Elvis Presley’s annotated copy of The Prophet by Lebanese-American poet Kahlil Gibran. The volume of twenty-six prose poems is being offered for £19,500 ($26,670) and is the first time this particular copy is for sale in the UK.

This superb association copy includes annotations by Presley and was presented to Ed Parker, founder of American Kenpo Karate, a modernized system of martial arts that employs street-fighting techniques. After the two men met at the Beverly Wilshire Hotel in 1960 during a karate demonstration, Parker and Presley became close friends. In addition to moonlighting as Presley’s bodyguard, Parker often served as Presley’s sparring partner. Presley’s interest in karate began during his army service and eventually led him to earn his first-degree black belt in 1960. Presley would go on to earn a seventh-degree black belt and even opened his own dojo called the Tennessee Karate Institute, which still operates today.

Presley was a voracious reader, according to Graceland Museum, and the performer often brought many books on tour and enjoyed an eclectic array of topics from sports, American presidents, and religious texts including the Bible and Zen Buddhism. The Prophet was one of his favorites and he routinely gave out annotated copies to friends. Parker recalled in his memoir, Inside Elvis, that “[Presley] was keenly aware of his mortality, and felt impelled to learn how man and the universe interact.”

“The Prophet made a deep and lasting impact on Elvis, and he read it so often that he memorized it. Elvis annotated a few copies of The Prophet over the course of his career which he presented to significant individuals in his life, so you do see copies come up for sale from time to time,” said Pom Harrington, owner of Peter Harrington.

Gibran’s work deals with the various facets of the human condition and has remained in print since its first printing in 1923 (Presley’s annotated copy was printed in 1966), with more than one million copies sold worldwide by 2012. Available in over 100 languages, it is also one of the most translated books in history.

“It is a really wonderful association copy, extensively annotated and underlined by the King himself, and has a compelling personal connection to an individual who had a significant influence on Elvis’ personal fascination with the martial arts,” said Harrington.