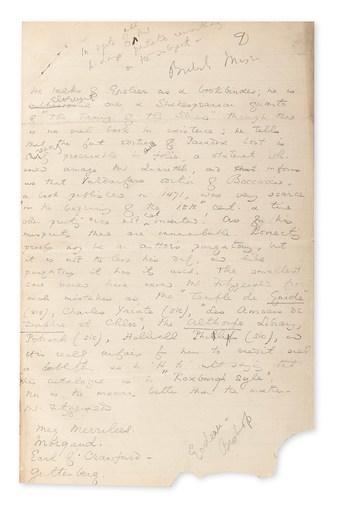 Sometime around 1886, Oscar Wilde was assigned to write a book review of Percy H. Fitzgerald's book, The Book Fancier: or, The romance of book collecting, published that year by S. Low, Marston, Searle & Rivington in London and Scribner & Welford in New York. He was singularly unimpressed with the volume, calling it "a clumsy bit of journey man's work, without grace or charm or delicacy of treatment. Even on ordinary matters of fact it is not reliable."

The penciled notes Wilde left behind--unsigned and fragmentary--are critical of Fitzgerald's style and his grasp of bibliography. Wilde was a bibliophile and a book collector, and his review reveals both his knowledge of the topic and his characteristic wit.

"…He talks of Grolier as a bookbinder; he is eloquent over a Shakespearian quarto of 'The Taming of the Shrew' though there is no such book in existence; he tells that the fat edition of Paradise Lost is readily procurable in small folio, a statement wh. would amaze Mr. Quaritch; and informs us that Valdarfar edition of Boccaccio, a book published in 1471, was very scarce in the beginning of the 15h cent., a time when printing was not yet invented! As to his misprints these are innumerable. Correcting proofs may be an author's purgatory, but it is not the less his duty, and like purgatory it has its uses." 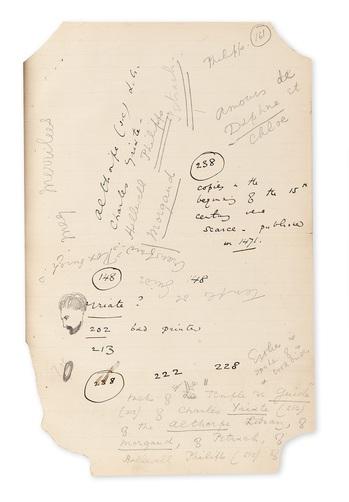 "…Bibliography is a charming science, but it requires [to be] charmingly treated, and we fear that Mr. P.F. promises none of the qualifications necessary for writing a book about books…"

Next week, Wilde's four-page manuscript of notes for the review will go to auction at Swann Galleries in New York. Considering that it will be coveted not only by Wilde aficionados, but by any of a number of determined collectors in the area called "books about books," the auction estimate of $5,000-7,000 seems rather conservative.