A Look Inside the Newly Renovated Kelmscott Manor

Kelmscott Manor in Oxfordshire, England, the home of designer and writer William Morris (1834-1896), reopened to the public on April 1, after a 30-month refurbishment project.

Built around 1600 from local stone, Morris initially rented it with friend, business partner, and artist Dante Gabriel Rossetti, but in 1874 it became the Morris family’s country retreat and is now owned by the Society of Antiquaries of London.

As well as major structural repairs to the house and its farm outbuildings, the £6-million project has focused on a new learning and activity studio on the footprint of a preexisting thatched byre; upgraded visitor facilities, including new exhibition/research spaces created from rooms previously not open to the public; and significant furniture and art conservation.

Using contemporary accounts and photographs, the rooms have been reinterpreted. “We have not attempted to replicate a particular moment in time in redisplaying the period rooms,” said Dr. Kathy Haslam, curator at Kelmscott Manor, “but rather to recreate the spaces as they would have been known to members of the Morris family over their 67-year association with the Manor based on evidence available.”

Kelmscott inspired Morris’s work and thinking and his popular Strawberry Thief and Willow Bough designs are among many directly inspired by its garden. Indeed, his 1890 book News from Nowhere contains descriptions of the house and its surroundings, and the famous Kelmscott Press edition (1893) has an illustration of the Manor as its frontispiece.

Inside, wallpaper has been reinstated in several rooms -- Lily in Morris’s room, Fruit in his wife Jane’s bedroom, and Daisy on the landing -- with each design individually printed by hand using the original blocks from the Morris & Co archives. In terms of furniture, a painted settle and an oak Gothic Revival style round table were designed by the architect Philip Webb for Morris, and seventeenth-century furniture from when Morris first rented the property remains in the house, including the bed in which he slept. One of Morris's quill pens is also on display.

1 of 7
© Society of Antiquaries of London 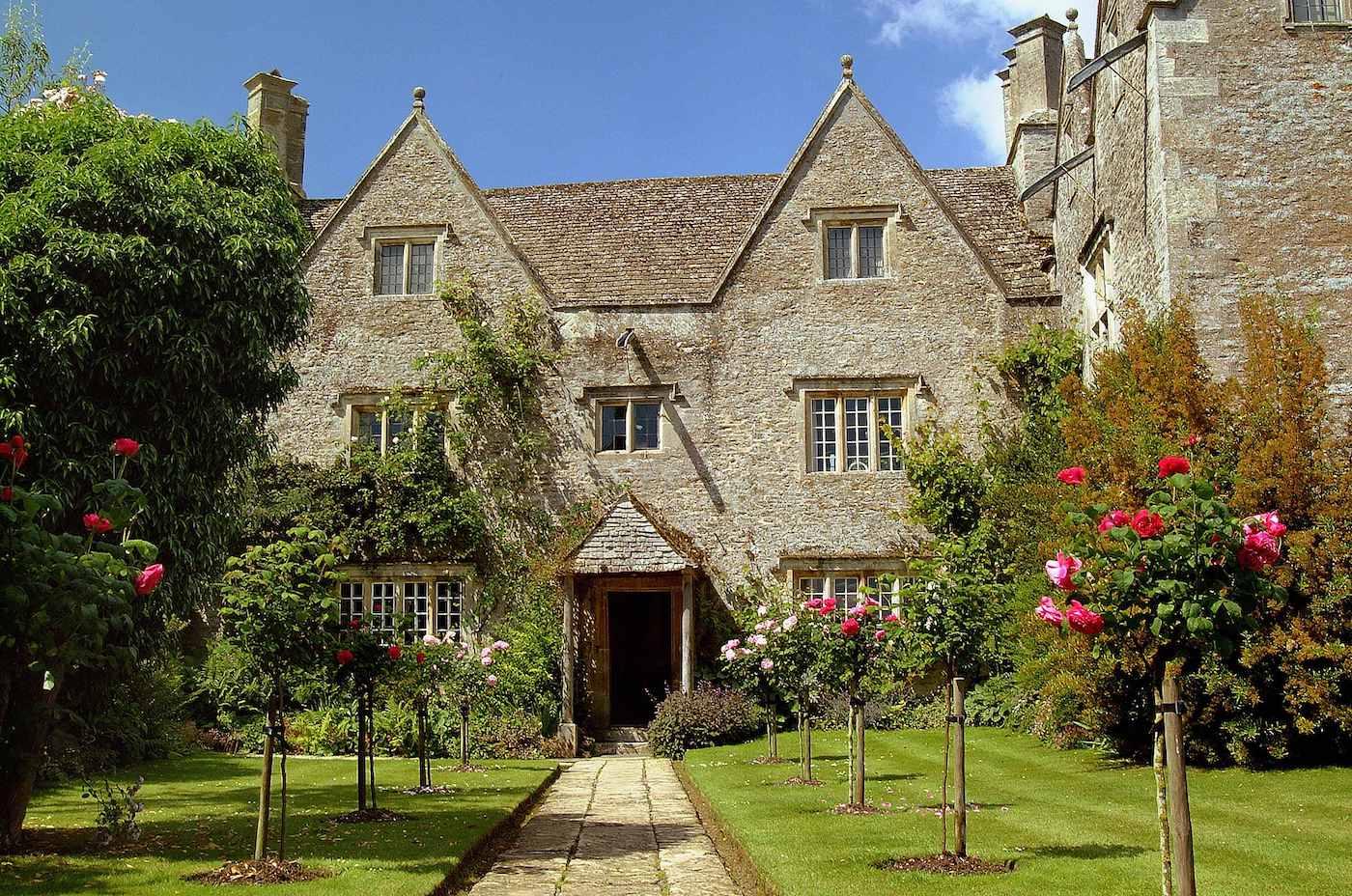 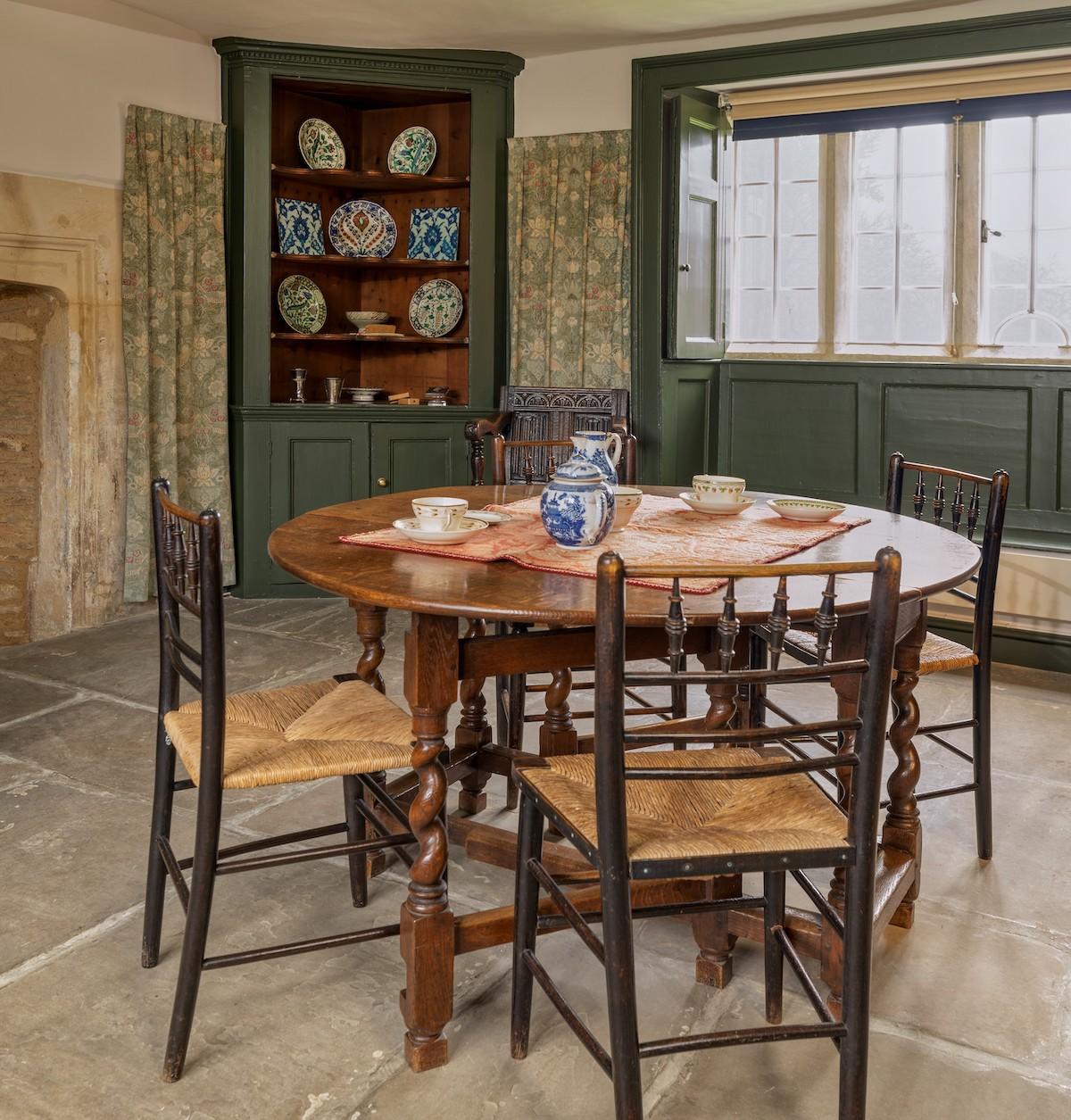 View of the Old Hall. William Morris wrote in his Gossip about an Old House on the Upper Thames about this room "in the place where the house is `thin in the wind,' so that there is a window east and a window west, and the whole room has a good deal the look of a particularly pleasant cabin at sea, were it not for the elms and the rooks on the west, and the green garden shrubs and the blackbirds on the east." 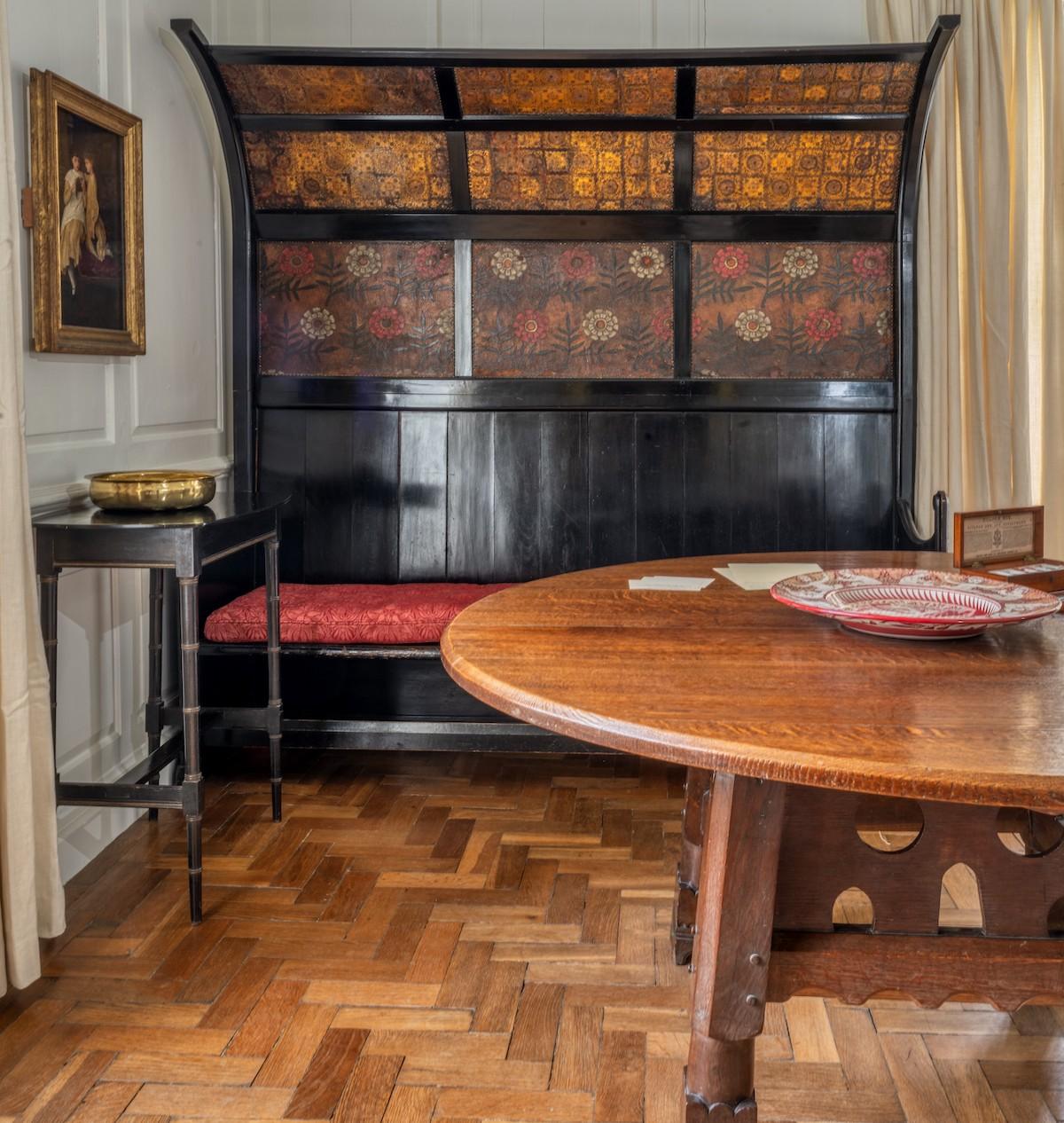 The painted hooded settle and the robust Gothic Revival style round table were designed by Webb for Red House. Both were once at Kelmscott House in London (Hammersmith), before being brought to Kelmscott Manor. 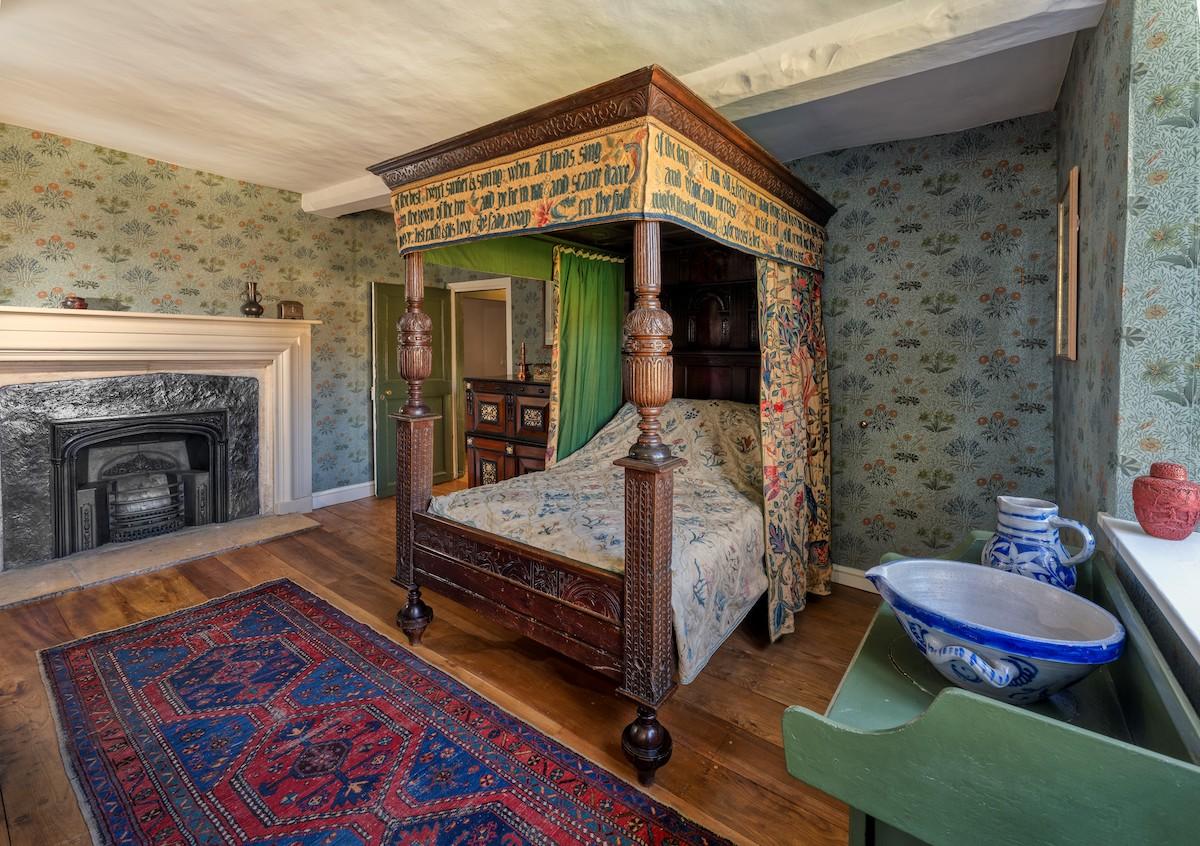 William Morris’s bedroom with Lily wallpaper. The bed was already in the house when Morris first rented the property. 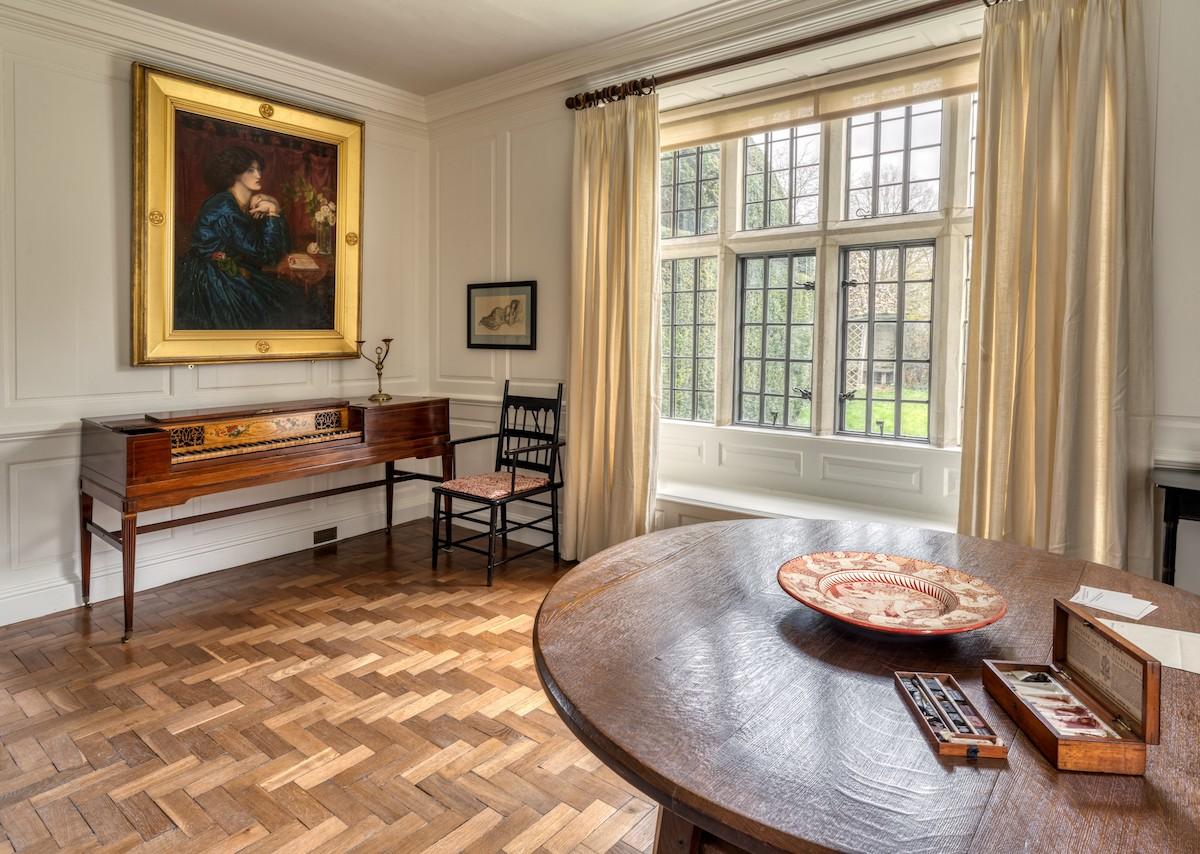 The paneled White Room with Blue Silk Dress (1868) by DG Rossetti. This is perhaps the most iconic portrait of Morris’s wife Jane, painted by Rossetti. Jane was one of Rossetti’s favorite models and most important muse and it was at Kelmscott that one of the most complex, three sided love affairs in art history unfolded. 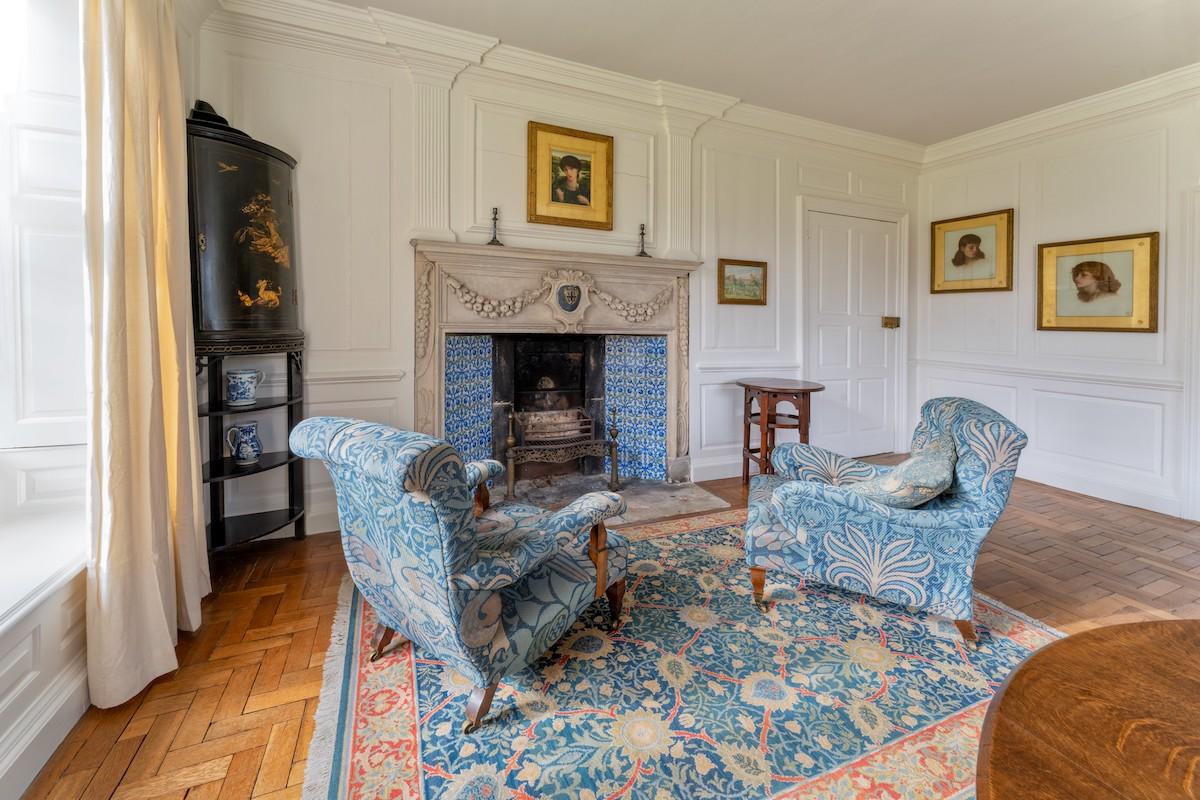 The paneled White Room with Water Willow by Charles Fairfax Murray (1895) a faithful copy of the 1871 original by DG Rossetti, hanging above the fireplace, with pastel portraits to the side of May Morris aged 9 and Jenny Morris aged 10 by DG Rossetti. Both were drawn at Kelmscott Manor and the frames designed by Rossetti. 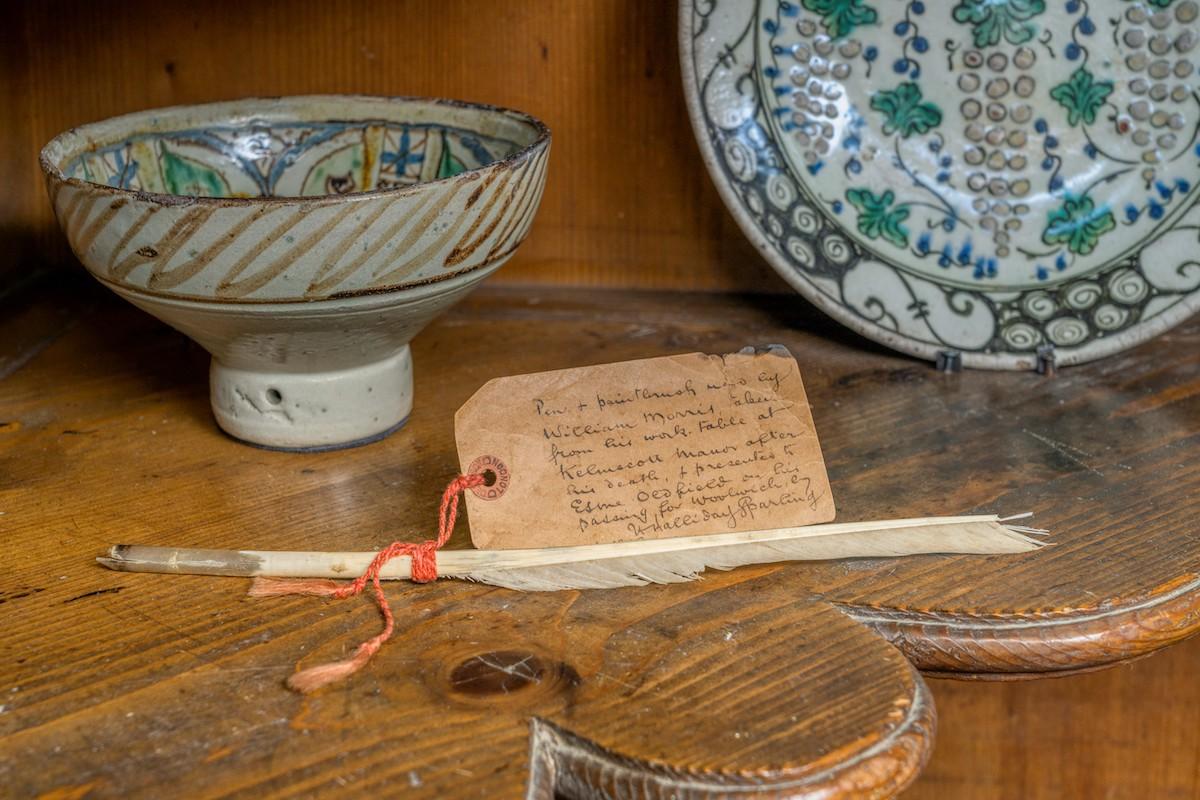 William Morris’s quill pen, which was on his worktable when he died, now on display in the Old Hall.