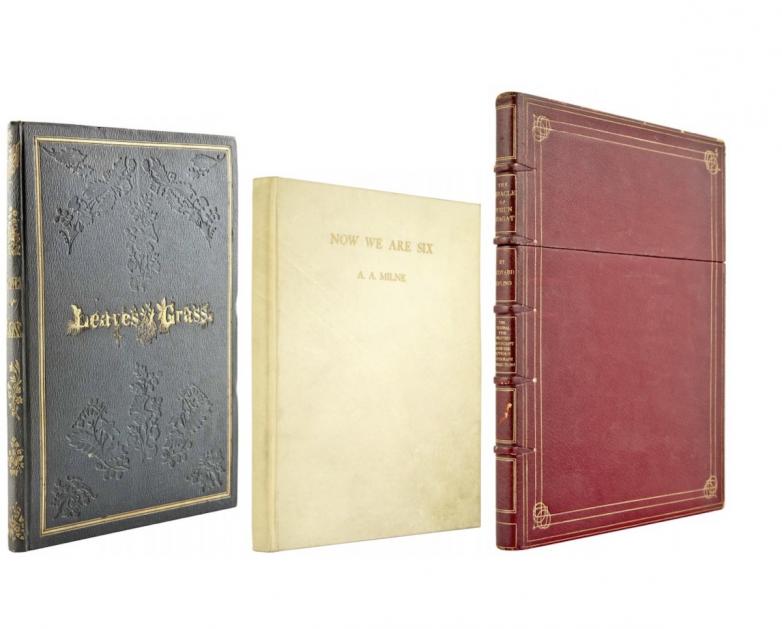 New York -- Doyle will hold a timed auction of Fine Literature closing on Wednesday, September 30, 2020 at 10am EDT. The sale features The Library of Duncan Cranford, a collection that was formed in the late 1930s to 1940s. Strong in Stevenson, Conrad, and Milne, all beautifully presented in morocco-backed slipcases, many of the books are in exceptional condition.

One major highlight of the collection is the first edition of Walt Whitman’s Leaves of Grass, 1855. In the first issue binding (in an exceptional state of preservation), this is the very rare English issue, with five rare broadsides tipped in at the front of the book including Emerson’s famous letter to Whitman in which he wrote “I greet you at the beginning of a great career.”

Several A.A.Milne items are likely to excite interest. One exceptional piece is a copy of Now We Are Six, one of twenty copies on Japan vellum, signed by the author and artist, and a very bright, fresh example of this rare issue. Also offered is the first of the four Pooh books, When We Were Very Young, inscribed to Milne’s literary agent Curtis Brown, an exceptional association by any standard. Another important work in the field of children’s literature in the collection is a copy of the first edition of Kenneth Grahame’s The Wind in the Willows.

Among the trove of Robert Louis Stevenson items on offer are copies of Treasure Island, first edition with all the first impression points. Copies of two privately printed items include the very rare A Martial Elegy for some Lead Soldiers, printed by the young Lloyd Osborne and Stevenson on their hobby press in Switzerland in 1882; and Stevenson’s remarkable polemic Father Damien: An Open Letter to the Reverend Dr. Hyde of Honolulu, the first privately printed edition issued in Sydney, Australia in 1890, issued in approximately 25 copies. An interesting autograph Stevenson item is a four-page musical manuscript in Stevenson’s hand, including (among several pieces) Drink to me only with thine eyes, a setting for two flageolets and a shell ocarina (Stevenson was a virtuosic performer on the former).

Conrad is represented by a copy of Youth: A Narrative and Two Other Stories, 1902, the first state, which contains the first appearance of the author’s Heart of Darkness, perhaps his best-known short story today, on which the classic Coppola film Apocalypse Now was modeled. Other authors include Hemingway, with a near-fine copy on offer of A Farewell to Arms, one of 510 signed copies, and Hemingway’s only signed limited edition. Two great Texas stories by O. Henry are present in the original manuscript: A Chaparral Christmas Gift, with its bitter ending (uncommon in the author’s works) and Art and the Broncho [sic—the author spells it thus], the tale of a cowboy artist and his disillusionment with art. Another manuscript of note is Kipling’s The Miracle of Purun Bhagat, which appeared in the second of the Jungle Books, this apparently the first version that was prepared for The Pall Mall Gazette in October 1894.

Other highlights of the sale are a group of first editions by John Steinbeck, including his third book To a God Unknown; Of Mice and Men; and a scarce review copy of In Dubious Battle. The same collection includes many works of the 1920s-30s. These include works by John Dos Passos in rare dust jackets, such as Pushcart at the Curb and The Garbage Man, and James Cain’s 1937 Serenade.