Vintage Poster Sale at Potter & Potter Auctions on May 22 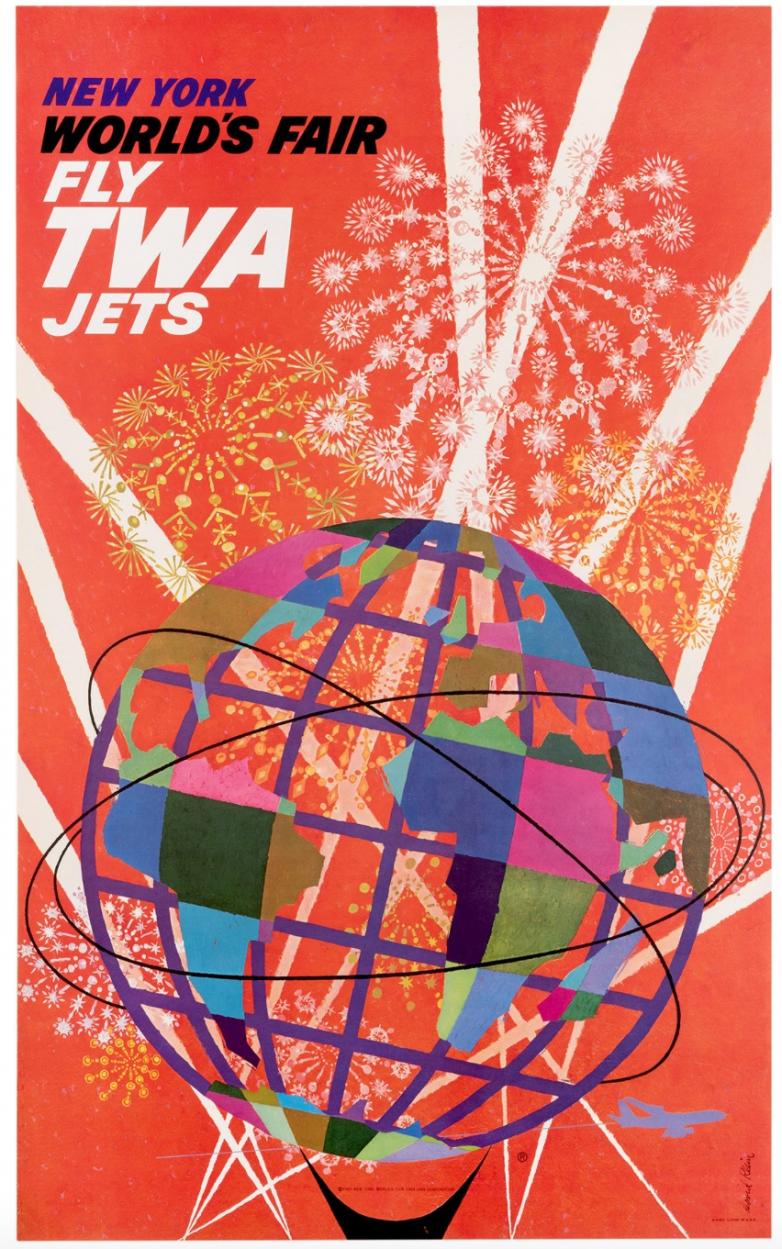 Chicago — Potter & Potter Auctions is pleased to announce its 725 lot Vintage Poster Sale to be held on Wednesday, May 22, 2019 starting at 10am at the company's gallery, located at 3759 N. Ravenswood Ave., Chicago, IL 60613. All lots from this upcoming sale are on display and available for public preview on Monday, May 20th and Tuesday, May 21st from 10:00am to 5:00pm in the Potter & Potter facility.

Premier, finely illustrated domestic midcentury travel posters are a key category in this sale. Selections on offer include examples from some of the most popular and well respected names in 20th century commercial illustration. Lot #321, a c. 1960s David Klein (1918 – 2005) Fly TWA New York poster is estimated at $2,000-2,500. This brilliantly colored poster features an abstract rendering of New York City in quadrilaterals and sparkling lights, with a TWA Lockheed Constellation to its upper right. This is the small version of this iconic image, measuring 25-¼ x 15-½”. Lot #201, a Stan Galli (1912-2009) Los Angeles United Air Lines poster depicting a vibrant portrait of a platinum blonde in sunglasses at the beach is estimated at $1,500-2,000.  This 1960s example, measuring 40-½ x 25",  is an uncommon variant of a poster typically advertising southern California, as opposed to Los Angeles. Lot #300, an Edward Mcknight Kauffer (1890-1954) American Airlines U.S.A modernist travel poster from 1948, is estimated at $1,600-1,800. It measures 40 x 30”.  Its handsome, classic design, showing a man holding a suitcase with his head in the form of a globe, advertises the concept of general travel rather than a specific destination. And lot #180, a Joseph Feher (1909-1987) Hawaii United Airlines poster from the 1950s, is estimated at $1,400-1,800. This snapshot of paradise measures 40 x 25” and is illustrated with a woman wearing a lei of flowers and doing the hula dance, standing on an island with fish and aboriginal Hawaiians decorating its landscape.

No passports are required to appreciate this sale's world-class selections of international posters of all sorts. Lot #122, a Roger Broders (French, 1883-1953) St. Pierre de Chartreuse poster is estimated at $1,800-2,400. St. Pierre de Chartreuse is a commune located in southeastern France. This primarily green, pink, and blue poster depict a view of its mountain and forest range and measures 39 x 25". It was produced in 1930 by Vaugirard in Paris. Lot #15, a 1913 French advertising poster for Terrot Bicycles, is estimated at $800-1,000. It measures 62 ½ x 47 ¼”. This fabulously illustrated poster shows a well-attired man on a bike, speeding down a hill hands free, enjoying a cigar, and holding a newspaper. (Please DO NOT try this at home!) Lot #466, a c. 1930s Mont St. Michel travel poster is estimated at $1,000-1,500. It measures 38 ¼ x 24”.  The poster romantically depicts this island and mainland commune in Normandy, France in the still waters of dawn.  And lot #355, a 1957 Maurice Laban (1912-1970) BOAC Qantas Australia New Zealand Great Britain travel poster, is estimated at $800-1,200. This wonder from down under measures 30 x 20”and features a playful kangaroo and koala bear pair as its focal point.

Posters promoting popular 20th century movies also play a starring role in this can't miss auction. Lot #597, a 1963 three sheet poster for The Great Escape is estimated at $800-1,000.  This WWII POW escape movie starred Steve McQueen and was nominated for both an Oscar and a Golden Globe award, among others, in 1964. It measures 78 x 41”. Lot #592, a 1964 Italian 2-foglio poster for Goldfinger, is estimated at $700-900. This classic entry in the 007 series starred Sean Connery as Agent 007 and won an Academy Award for sound effects and a Grammy Award for best original score in 1965. It measures 39 x 55”. Lot #590, an oversized 1950 poster for the film Gene Autry and the Mounties is estimated at $600-800. This 80 x 40-¾” lithograph advertises the film with scenes from the movie, including Autry featured prominently on his horse. And lot #600, a 1971 promotional poster for the film Willy Wonka and The Chocolate Factory, is estimated at $500-700. It measures 41 x 27” and features key characters and elements of the plot as part of its design. This Paramount Studios production was nominated for an Academy Award and a Golden Globe in 1972.

This sale comes full circle with wall to wall selections of fantastic historical, magic, propaganda, and advertising posters. Lot #681, a Byrnes & Helene Crayon Artists & Grotesque Comedians lithograph poster is estimated at $1,000-1,5000. This 1885 example is illustrated with two performers in blackface. The male subject jumps in front of a drawing board and the female subject holds a small fan. This extraordinarily rare poster has never appeared at public auction; the only other known one is located institutionally. It is framed and measures 18 x 14".  Lot #656, an eight-sheet color lithograph The World’s Greatest Psychic Sensation. Samri S. and Miss Baldwin in Oriental Hypnotic Dream Visions is estimated at $4,000-6,000.  This 109 x 81” c. 1895 graphic pictures Miss Baldwin - blindfolded and empowered with second sight by magical forces - sitting and surrounded by red imps rushing to her with questions. Lot #647, a 1944 Russian Liberation Army propaganda poster is estimated at $800-1,200. The 40 x 27” poster is captioned in both Russian and Arabic and depicts a lion laying over a dead man. The Russian Liberation Army (POA) fought under German command during World War II. And this highlight tour crosses the finish line with lot #37, a Corvair Dealer promotional showroom advertising poster. This fantastically illustrated example debuts each new Corvair model for the 1961 year, including the Greenbrier Sports Wagon. It measures 30 x 40” and is estimated at $700-900.

According to Gabe Fajuri, President at Potter & Potter Auctions, "As a poster collector myself, I'm thrilled to offer such a wide range of examples - in so many categories - in this auction. We hit several home runs with our last poster auction just a few months back, and hope to see the same results for this auction. Mid-century posters continue to be highly sought after by collectors, but the entertainment, advertising, and propaganda posters in this sale should not be overlooked. There are quite a few scarce, choice, and even rare images going on the block."