Bristol, UK — The physical copy of Lady Chatterley’s Lover by DH Lawrence used by the judge in the landmark obscenity trial of 1960 has been acquired by the University of Bristol.

The annotated Penguin Books edition of the novel will be housed in the Library as part of the Penguin Archive, held by the University’s Special Collections. 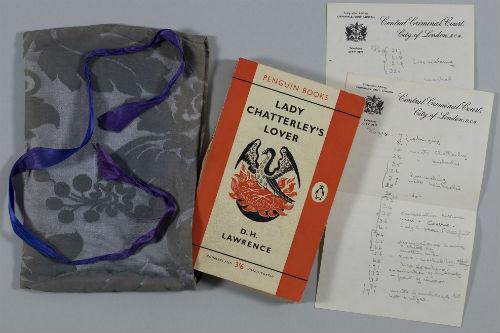 This contains a wide variety of materials on the establishment and business life of the famous publisher and some of its imprints, as well as a large collection of Penguin books from 1935 to date.

Specifically, it also includes personal papers, notes and correspondence relating to the Chatterley case by Sir Allen Lane, publisher and co-founder of Penguin Books as well as editorial files and proof versions of the book.

It also features the archives of Michael Rubinstein, Penguin’s lawyer in the trial, including his working papers, witness statements and correspondence with witnesses and potential witnesses.

Sold at auction by Sotheby’s in October last year to a private individual in the USA, the copy of Lawrence’s final novel used by Mr Justice Byrne at the Old Bailey, became the subject of export deferral by the UK Government.

A process was initiated to find a UK buyer who would match the auction price and provide access to the book for researchers and the public.

The export deferral captured media attention worldwide and a crowdfunding campaign was launched by English PEN, founding centre of PEN International, a worldwide writers’ association which campaigns to defend writers and readers in the UK and around the world whose human right to freedom of expression is at risk.

The campaign was supported by writers including Neil Gaiman, Amanda Palmer and Stephen Fry who tweeted that the book was an “enticing and important object” that should stay in the UK.

Philippe Sands QC, President of English PEN, said: “We are thrilled that our crowdfunding campaign for this historic work by DH Lawrence, an active member of English PEN and a central figure in the annals of English literary history, has been a success. “The trial involving Lady Chatterley’s Lover was a seminal moment in the continuing struggle for freedom of expression, and the judge’s copy belongs here in the UK, a singular reminder of the road travelled and remaining.”

Deputy Vice-Chancellor and Provost at the University of Bristol, Professor Judith Squires, added: “This special book will be a source of inspiration, teaching and research for our staff, students and visitors, supporting the University’s creative, scholarly and social outcomes for years to come. “It will be a focal point in our new University Library, which is planned to open in 2023/4, providing specialist research facilities, galleries and public event spaces.”

Professor of Modern Literature, Ulrika Maude, from the University’s Department of English, said: “The trial attests to the ongoing importance of literature in addressing matters that are often seen as inadmissible or taboo in mainstream culture.”

Professor Lois Bibbings from the Bristol Law School said: “This trial was a test case brought to assess the boundaries of the law and here it was the publisher rather than the author who faced a prosecution backed by the Director of Public Prosecutions.

“This nationally and, indeed, internationally significant volume should rest alongside the Penguin Archive and, more crucially, the trial papers of Michael Rubinstein, the solicitor who acted for Penguin Books in the obscenity trial.”

In addition to the funds from the English PEN crowdsourcing, financial support has also been given to date by Penguin Books, the TS Eliot Foundation, Friends of the National Libraries, the Penguin Collectors Society and Elizabeth Lane, daughter of the late Richard Lane, Penguin Books.

The University of Bristol has also stepped up to the challenge of retaining this symbolic book within the UK and is proactively seeking financial support from alumni and friends of the University to reach the rest of the total purchase price, ensuring this very special book can be shared as a source of knowledge and inspiration with as wide an audience as possible.

Rebecca Sinclair, Brand and Communications Director at Penguin Random House UK, added: “The book marks a cornerstone of Penguin’s heritage and our continued dedication to freedom of expression. “We’re pleased that this copy will find a home in the University of Bristol’s archives, alongside the Penguin Archive and many other materials relevant to the trial, where it will remain accessible to the public for years to come.”

Clare Reihill, Trustee of the TS Eliot Foundation, said: “An important object in our jurisprudential history, an emblem of our hard-won freedoms of speech. Having personally fought against the novel’s suppression, I can safely say TS Eliot himself would be thrilled by this outcome.”

When the full unedited edition of Lady Chatterley’s Lover was published by Penguin Books in Britain in 1960, the trial of Penguin under the Obscene Publications Act 1959 was a major public event and a test of the new obscenity law.

The 1959 Act had made it possible for publishers to escape conviction if they could show that a work was of literary merit.

Various academic critics and experts of diverse kinds, including EM Forster, Helen Gardner, Richard Hoggart, Raymond Williams and Norman St John-Stevas, were called as witnesses, and the verdict, delivered on 2 November 1960, was ‘not guilty.’

This resulted in a far greater degree of freedom for publishing explicit material in the United Kingdom.

The Penguin second edition, published in 1961, contains a publisher's dedication, which reads: “For having published this book, Penguin Books was prosecuted under the Obscene Publications Act, 1959 at the Old Bailey in London from 20 October to 2 November 1960.

“This edition is therefore dedicated to the twelve jurors, three women and nine men, who returned a verdict of ‘not guilty’ and thus made DH Lawrence's last novel available for the first time to the public in the United Kingdom.”

The societal importance of this copy of the book extends beyond the object itself or its author, representing one of the most important events in publishing history as well as of social and legal change in the twentieth century.

No other jury verdict in British history has had such profound societal impact. It was arguably the watershed moral victory which paved the way for wider challenges to the establishment in the 1960s, opening the door for a swathe of liberal legislation, including the legalisation of homosexuality and abortion, the abolition of the death penalty and divorce law reform.

The trial itself led to what has since been coined as ‘the Spycatcher effect’, with the unsuccessful legislation aimed at suppressing access serving to fuel massive sales – over just three months following the verdict, three million copies of Lady Chatterley’s Lover were sold, reportedly outselling the bible. Selfridges sold 250 copies in minutes. A spokesman told The Times newspaper: “It's bedlam here. We could have sold 10,000 copies if we had had them.”