The first representation of the Arabic, Syriac, Coptic, and Ethiopic alphabets in print is found in Bernhard von Breydenbach’s Peregrinatio in terram sanctam (1486), an illustrated guide to the Holy Land for pilgrims. Other notable ‘firsts’ include the first edition of William Bligh’s A Narrative of the Mutiny, on Board His Majesty’s Ship Bounty (1790), and issues of Teny Soa (The Good Word) – the first newspaper to appear in Madagascar, which was published in Antananarivo by the London Missionary Society from 1870 onwards.

Other highlights include Lady Hester Stanhope’s Memoirs and Travels (1846) – which record the eccentric aristocrat’s travels through the Middle East, where she spent the last 25 years of her life as a hermit in a monastery at the foot of Mount Lebanon – and the first edition of E.M. Forster’s Alexandria (1922). Forster wrote his history and travel guide after being stationed in Alexandria as a Red Cross volunteer from 1915- 1918, and it was published in the city in 1922. Most copies of the first edition were destroyed, and this rare copy is from the library of Stephen Keynes, the nephew of Forster’s friend John Maynard Keynes. 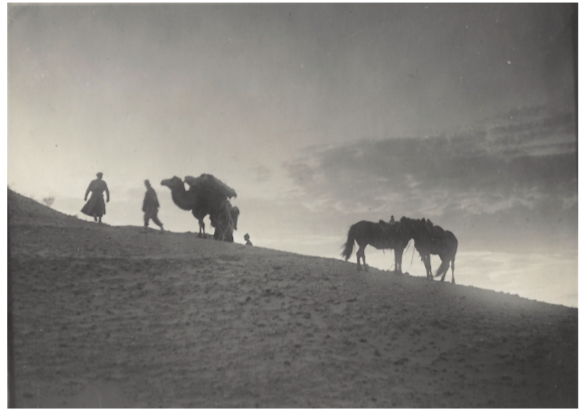 Photographic images of the Gobi Desert by Paul Lieberenz.

The catalogue also includes some important ‘lasts’, including a set of photographic prints from Sven Hedin’s last expedition, ‘The Sino Swedish Expedition’ of 1927-1935, which crossed the Gobi Desert. These images by Paul Lieberenz, the expedition photographer, depict camel caravans and horse carriages travelling through the desert, mountain passes, and the Jollbar Khan’s castle at Hami.

An important and very frank twelve-page letter of 1865 by David Livingstone discusses other African explorers and condemns Richard Burton as ‘an awful ruffian’, adding ‘I don’t believe that Burton was at Mecca’. Some ten weeks after writing it, Livingstone departed for his last expedition, during which he searched for the source of the Nile and was relieved by Henry Morton Stanley. He would never return to Britain, and died in Africa on 30 April 1873.