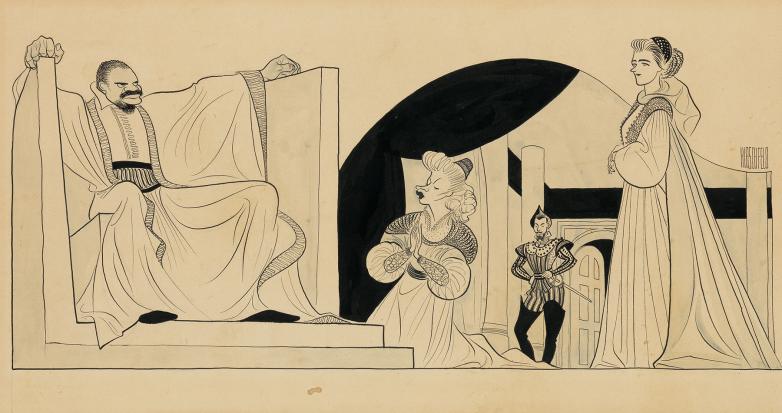 New York — Illustration Art at Swann Galleries on June 4 saw a bustling auction room with bidding wars delivering strong prices: “I was extremely pleased with the collector participation in all subject areas of the sale, but Broadway legends stole the show today, as it were, with two outstanding Hirschfelds and the Mielziner,” said Illustration Specialist Christine von der Linn.

The sale was led by Al Hirschfeld’s Paul Robeson as Othello, published on August 9, 1942 in The New York Times, which captures Robeson in his groundbreaking moment as the first time an American production of Othello cast a black actor in the titular role with a white supporting cast. The only portrait of the actor by Hirschfeld, it brought $68,750, the second-highest price for the artist at auction. Also of note by the caricaturist was The Merry Widow, published in The New York Times, August 15, 1943, which earned $20,000.

Additional theater illustrations included the backdrop design for Act One, Scene Two of the 1940 Broadway production of Pal Joey by Jo Mielziner. The work brought a record for the legendary scenic designer at $55,000 after a determined round of bidding between two collectors drove the price over its $6,000 high estimate.

Magazine cover designs were highly sought-after: Miriam Troop made her auction debut with the illustration for the June 15, 1940 issue of The Saturday Evening Post ($40,000); Frederick Cooper’s pen, ink and watercolor drawing for a special issue of LIFE magazine published on May 12, 1927 also made its auction debut ($9,375); the recently rediscovered Caty Fancy, 1993, by Edward Gorey featured on the December 10, 2018 issue of The New Yorker ($16,250); and Lee Brown Coye’s acrylic painting for the 25th anniversary issue of Weird Tales ($18,750).

Mead Schaeffer’s frontispiece and dust jacket design for the 1922 reissue of Moby Dick brought $50,000. Also by Schaeffer was an oil on canvas scene for A Tale of Tombarel’s Past published in Cosmopolitan magazine in 1930 ($16,250). Further illustrations for literary works included a pen-and-ink drawing by Frederic Remington for his short story A Scout with the Buffalo Soldiers published in The Century magazine in 1889 ($17,500), and Richard Power’s rear cover illustration for Star Science Fiction Stories, 1953 ($7,500).

Swann Galleries is currently accepting consignments for the fall 2019 season. Visit swanngalleries.com or download the Swann Galleries App for catalogues, bidding and inquiries.