Washington, D.C. — U.S. Supreme Court Justice Ruth Bader Ginsburg will be among the featured speakers at the 2019 Library of Congress National Book Festival, along with dozens of best-selling authors, novelists, historians, poets and children’s writers, the Library announced today. This year’s festival will be held Saturday, Aug. 31, from 8:30 a.m. to 8 p.m. at the Walter E. Washington Convention Center in Washington, D.C. 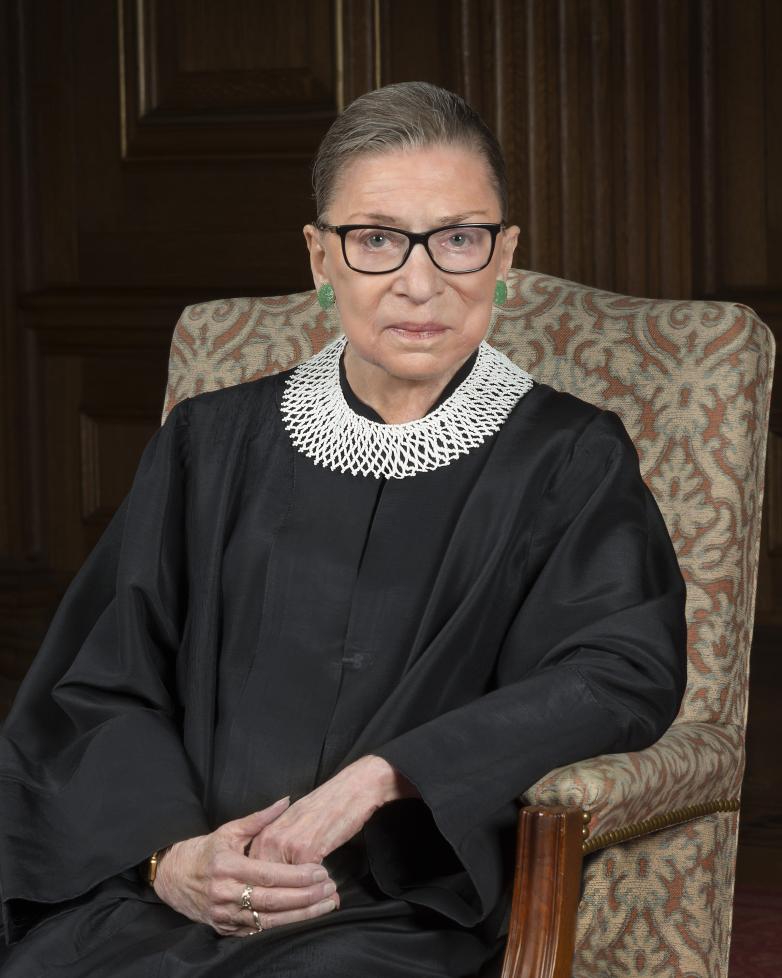 Collection of the Supreme Court of the United States.

U.S. Supreme Court Justice Ruth Bader Ginsburg will be among the featured speakers at the 2019 Library of Congress National Book Festival on Aug. 31.

Ginsburg will discuss her book “My Own Words,” a collection of writings and speeches from throughout her life, discussing gender equality, the workings of the Supreme Court, interpreting the U.S. Constitution, being Jewish, and the law and lawyers in opera. The book, written with her authorized biographers, was Ginsburg’s first book since becoming a Supreme Court justice in 1993. It’s been called witty, engaging, serious and playful.

The 2019 festival will invite visitors to Explore America’s Changemakers, part of a yearlong initiative coinciding with a series of exhibitions, events and programs at the Library. Exhibitions opening this year will explore the fight for women’s voting rights and Rosa Parks’ groundbreaking role in civil rights history. Changemakers are everywhere. Everyday citizens become trailblazers and history makers, shaping America.

Among numerous festival programs dedicated to the theme of Changemakers, a special panel will feature new books on Winston Churchill by Andrew Roberts, Frederick Douglass by David Blight and visionary women including Rachel Carson, Jane Jacobs, Jane Goodall and Alice Waters, by Andrea Barnet. This year’s schedule includes a rich mix of authors and genres, including some highlights below. More authors will be announced this summer.

Main Stage
•    U.S. Supreme Court Justice Ruth Bader Ginsburg discusses her book “My Own Words” with NPR correspondent Nina Totenberg.
•    Historian David McCullough will discuss his new book “The Pioneers: The Heroic Stories of the Settlers Who Brought the American Ideal West.”
•    Graphic novelist Raina Telgemeier will talk about her new interactive journal “Share Your Smile: Raina’s Guide to Telling Your Own Story.”
•    David Brooks will present his new book “The Second Mountain” on what it takes to lead a moral, meaningful life.

History and Biography
•    Journalist and historian Evan Thomas will discuss his new biography “First: Sandra Day O’Connor,” exploring the life of America’s first female Supreme Court justice.
•    Historian Douglas Brinkley will speak about his new book “American Moonshot,” taking a fresh look at America’s space program and the race to the moon 50 years after the Apollo 11 moon landing.
•    Journalist and writer Elaine Weiss will discuss her new book “The Woman’s Hour: The Great Fight to Win the Vote,” exploring the fight for women’s suffrage.
•    Michael Beschloss will discuss his book “Presidents of War,” examining American leaders at war from James Madison to recent times.
•    Military historian Rick Atkinson recounts the first 21 months of America’s violent war for independence in his new book “The British Are Coming.”

Understanding Our World
•    Chef and humanitarian José Andrés will discuss his book “We Fed an Island: The True Story of Rebuilding Puerto Rico, One Meal at a Time” as well as “Vegetables Unleashed.”
•    Historian and filmmaker Henry Louis Gates Jr. will join a panel on Race in America, discussing his new book “Stony the Road: Reconstruction, White Supremacy and the Rise of Jim Crow” along with authors Steve Luxenberg and S. District Court Judge Richard Gergel.
•    A conversation on health and bioethics with University of Pennsylvania President Amy Gutmann and Jonathan Moreno on their new book “Everybody Wants to Go to Heaven But Nobody Wants to Die: Bioethics and the Transformation of Health Care in America” with Andrea Mitchell of NBC News.

Science
•    A conversation on animal emotions with Frans de Waal on the new book “Mama’s Last Hug: Animal Emotions and What They Tell Us About Ourselves” and Alexandra Horowitz on her new book “Our Dogs, Ourselves.”

Poetry and Prose
•    Julia Álvarez will celebrate the 25th anniversary of her novel “In the Time of the Butterflies.”

Fiction
•    Joyce Carol Oates will discuss her fiction collection “Night-Gaunts and Other Tales of Suspense.”
•    Barbara Kingsolver will present on her novel “Unsheltered,” following the stories of two families who lived in the same house at separate time periods in New Jersey. One family lived in the 1800s and the other in the aftermath of Hurricane Sandy.
•    Sigrid Nunez will discuss her book “The Friend,” a story of the bond between a woman and her dog.
•    Detective novelist Sara Paretsky discusses her new book “Shell Game.”

The National Book Festival is made possible by the generous support of private- and public-sector sponsors who share the Library’s commitment to reading and literacy, led by National Book Festival Co-Chairman David M. Rubenstein. Charter sponsors are the Institute of Museum and Library Services, The Washington Post and Wells Fargo; Patron sponsors are The James Madison Council, the National Endowment for the Arts and the National Endowment for the Humanities; the Champions are Thomas V. Girardi and the John W. Kluge Center at the Library of Congress; Contributor-level sponsors are Pizza Hut BOOK IT! Program and Scholastic Inc.; and, in the Friends category, Booklovers Circle Members, Bookshare - a Benetech initiative, Buffy Cafritz, Embassy of Australia, Embassy of Canada, Embassy of Germany, Embassy of Ireland, Embassy of Latvia, Embassy of Sweden, Harper Lee Prize for Legal Fiction administered by The University of Alabama School of Law, The Hay-Adams, Inter-American Development Bank, The Junior League of Washington, Leon Levy Center for Biography (CUNY), Andy King, Library of Congress Federal Credit Union, Mexican Cultural Institute, Embassy of Mexico, Timothy and Diane Naughton, Small Press Expo (SPX), Spain Arts & Culture and Embassy of Spain; Media Partners are C-SPAN2’s Book TV, The New York Times and NPR. Those interested in supporting the National Book Festival can contact the Library at devofc@loc.gov.