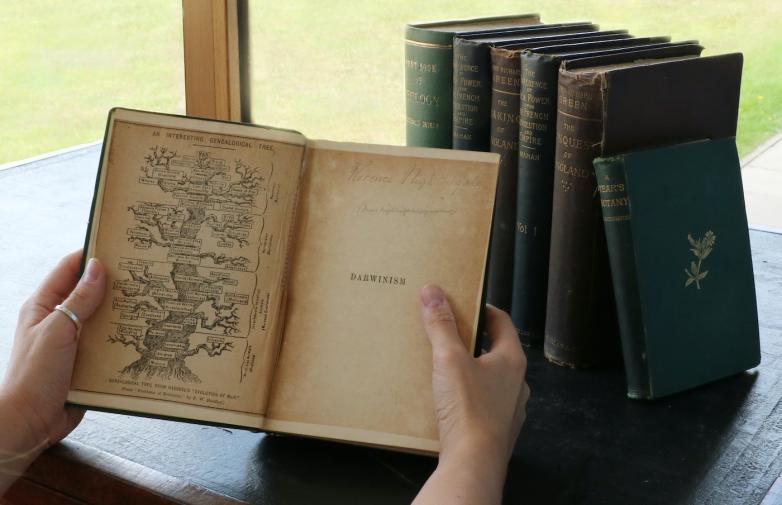 Six books inscribed by Florence Nightingale (1820-1910) come to auction at Sworders in September.

Stansted Mountfitchet, Essex, England — Six books inscribed by Florence Nightingale (1820-1910), the founder of modern nursing, come to auction at Sworders in September, They are being sold by descendants of WJP Burton, the principal of a school sited in the Nightingale family home in Derbyshire, with expectations of £3000-5000.

The textbooks on subjects such as geology, history and botany were given - seemingly second-hand - by Florence Nightingale to the school in her later years. In an 1893 copy of Macmillan’s Geology (1893) she wrote in pencil Mr Burton, with Florence Nightingale’s congratulations on the good he is doing, Christmas, 1897 while in a two-volume printing of Alfred Mahan’s The Influence of Sea Power upon the French Revolution (1892) she had inscribed Mr. Burton, Lea Board School, with Florence Nightingale’s grateful acknowledgements for the good he is doing. The presentation dates range from January 1884 to December 1888.

WJP Burton was the principal of Lea Board School in Holloway, Derbyshire that was sited in Lea Hurst, the former Nightingale family home built by William Edward Nightingale (1794-1874) on inherited lands in 1825. Florence (who was born in Italy and took the name of her city of birth) had grown up at Lea Hurst – the family invariably spent the summer there and the winter at Embley Park, Hampshire – and she retained a strong connection with the property school, later joining the school board.

The collection has been sent for sale by Burton’s grandchildren.

Sworders’ book specialist Michael Kousah comments: “Florence is known for her sometimes haphazard inscriptions to books, typically done in pencil. With this, and the strong provenance, I knew I was handling something special.”

Florence Nightingale first came to prominence while serving as a manager and trainer of nurses during the Crimean War in which she organised care for wounded soldiers at Constantinople. As ‘The Lady with the Lamp’ who made rounds of wounded soldiers at night, she became an icon of Victorian culture. In 1860, she laid the foundation of professional nursing with the establishment of her nursing school at St Thomas’ Hospital in London – the first secular nursing school in the world.

The books will be offered for sale as a single lot in a timed auction on Sworders’ website. Bidding will open on Friday September 17, ending on Sunday September 26.