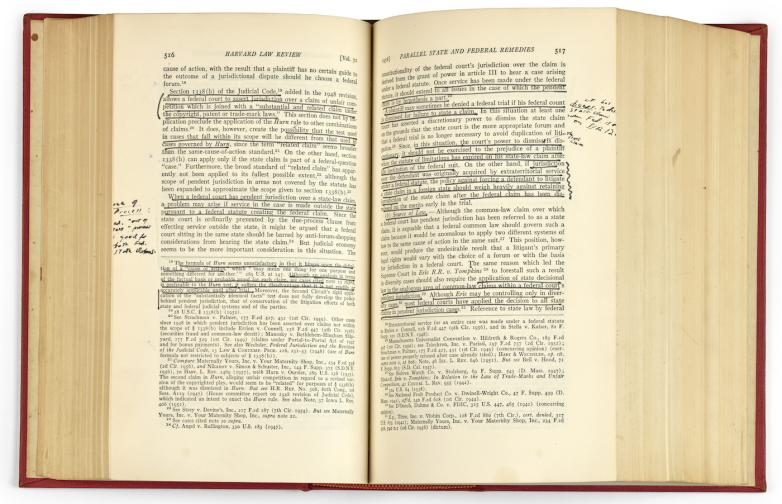 New York — A reflection on the rich inner life of a beloved public figure, Bonhams announces the sale of pioneering Supreme Court Justice Ruth Bader Ginsburg’s personal library. Slated for January 19 - 27, the online-only sale will feature more than 1,000 personal books belonging to the late trailblazing justice dating from her years at Harvard and Columbia Law Schools, through her early career as a lawyer and law professor, to her appointment as a Federal judge and, finally, to the U.S. Supreme Court.

This sale features approximately 100 lots of books, photographs, and ephemera from the Ginsburg’s private library, including textbooks from her days as a student, legal publications from her long career as a litigator and law professor, and literature read by both Ruth and Marty Ginsburg during their marriage (most with Ginsburg ownership bookplates to the front pastedowns). Notably included are Catcher in the Rye, Lady Chatterley’s Lover and titles by Ginsburg’s former Literature professor, Vladimir Nabokov, alongside volumes by Tolstoy and De Tocqueville.

High points include:
•    Ginsburg’s personal copy of the 1957-58 Harvard Law Review, the year that she was a member, heavily annotated by her. Estimate: $2,500 - 3,500.
•    Ginsburg’s personal copies of the Reports on the 1978 Equal Rights Amendment Extension Hearings before the House and Senate subcommittees. Estimate: $600 - 900.
•    Offprints of Ginsburg’s own articles, including “Women in the Federal Judiciary” (1995), inscribed by Ginsburg to Senator Nancy Kassebaum. Estimate: $800 - 1200. A Sandra Day O’Connor legal article “They Often Are Half Obscure: The Rights of the Individual and the Legacy of Oliver Wendell Holmes” (1992), a presentation copy from the Justice to Ruth Bader Ginsburg, just days before her nomination, and subsequently quoted from in her nomination acceptance speech. Estimate: $800 - 1200.
•    Toni Morrison’s Beloved inscribed by the author to Ruth and Martin Ginsburg. Estimate: $300 - 500.
•    Books relating to important cases adjudicated by Ginsburg, including Citizens United (Estimate: $200 -300), Bush v. Gore (Estimate: $400 - 600), and Lilly Ledbetter’s fair pay lawsuit (Estimate: $250 - 350), all inscribed to Ginsburg. A deluxe copy of Antonin Scalia’s Reading Law, warmly inscribed to Ginsburg. Estimate: $600 - 900.
•    Ginsburg’s copy of her book, My Own Words, with her personal bookplate. Estimate: $1000 - 2000.

Catherine Williamson, head of Bonhams book department, says, “A person’s library can give us a sense of who the individual is and how she came to be. Justice Ginsburg’s library is no different, as it records her evolution from student (and voracious reader) to lawyer and law professor, to judge and finally, Justice of the United States Supreme Court. The books Justice Ginsburg chose to keep on her own bookshelf showcase the rich inner and intellectual life of one of the most influential women in recent American history.”