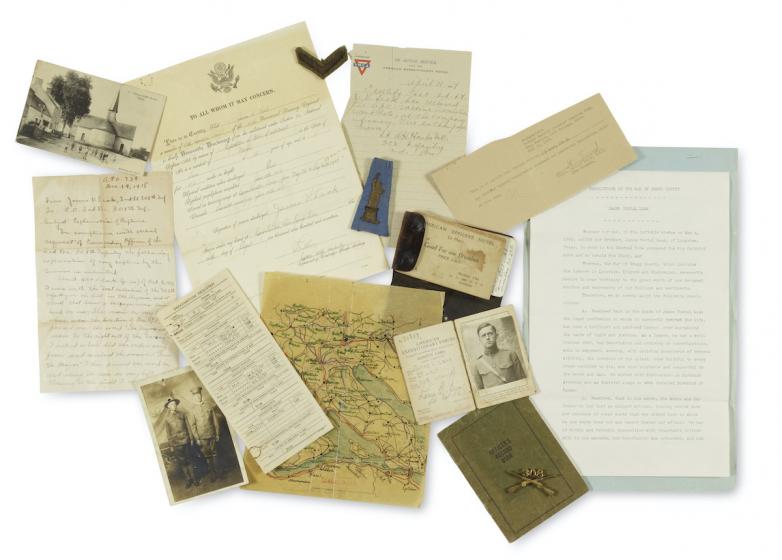 New York — On October 2, 1917 the American 77th division, made up of 694 men, launched an attack on the German lines dug into the Argonne Forest in Northeastern France believing that they were supported on both sides by French and other US forces. The flanks however did not progress as planned and the 77th found themselves isolated in the forest surrounded by German troops, giving rise to the name ‘The Lost Battalion’. They may have stayed lost forever if not for the work of a carrier pigeon. An archive of the belongings of James Leak, a platoon commander in the 77th, including a handwritten letter describing his experience of the Argonne and his capture and transfer to a German prisoner of war camp, his brass shoulder insignia of crossed rifles and his officers record book, is on offer as part of the Conflicts Online Sale taking place between January 19-29. It has an estimate of $4,000-6,000.

Head of the Sale Bonhams’ specialist Tom Lamb said, “The incident of the Lost Battalion is engrained in the psyche of American Military Tradition. To read first-hand accounts from a platoon commander of the event is as thrilling as it is shocking. The bravery that these men showed more than 100 years ago helps put the world’s current situation in a little perspective. Leak’s archive stands alongside many other objects from the American military in World War I on offer in the sale. Given they were only on the ground in France for 9 months, American WWI relics are very rare.”

The Lost Battalion were trapped in the forest for six days, holding out under consistent German shelling and even some from their own lines. Food was scarce and water was available only by crawling, while under fire, to a nearby stream. There was limited ammunition and reinforcements attempts to contact the 77th to work out their location proved futile. All the runners sent from within the forest to get help were intercepted by German patrols, so Major Charlie White Whittlesey decided to use carrier pigeons. Initially this proved unsuccessful as many of the birds were shot down and the only one which did return passed on incorrect coordinates which resulted in the Lost Battalion taking friendly fire. The unit was saved however by the heroic efforts of a different pigeon Cher Ami.

Cher Ami was dispatched by the 77th with a note written on onion paper reading ‘We are along the road parallel to 276.4. Our own artillery is dropping a barrage directly on us. For heavens sake stop it’. As she attempted to fly home the Germans saw her rising out of the bush and opened fire. Despite being shot through the breast, blinded in one eye, and with her left leg hanging only by a tendon, Cher Ami managed to take flight again and arrived back at her loft at division headquarters 25 miles away in just 25 minutes. This brave bird helped save the lives of the 194 survivors of the 77th as, upon discovering their location, American reinforcements managed to push the German forces back and find the Lost Battalion.

James Leak was the platoon commander of Company E in the 77th. On 4 October he moved his platoon to the right and got detached from the main force. During a bombardment he took shrapnel to his left leg, unable to move he lay pretending to be dead as a German patrol came by. One of the patrol spiked him with a bayonet and upon realising that Leak was still alive captured him and transferred him to a German prisoner of war camp.

Other World War I Highlights Include:

•    94th Aero Squadron, Original Plane Side Fabric "Hat in the Ring" from Alan Winslow's Nieuport 28. A historic plane side from the Nieuport 28 which was flown by the first American pilot in an American Squadron to shoot down an enemy plane. The 94th Aero Squadron was one of the most famous flying squadrons in America’s fledgling Air Arm and is the oldest in the US Air Force. In April 1918 they were sent to the front at Toul in Northeastern France with their planes adorned with the ‘Hat in the Ring’ insignia. On April 14th two pilots who had yet to see combat, Douglas Campbell and Alan Winslow, took off to hunt down two enemy aircraft seen in the vicinity. Within minutes they had returned to the base with two victories- the first victories of any American Flyer in WWI. The insignia on the plane side fabric shows an Uncle Sam Top Hat of white stars on blue with red and white stripes. There is also a black iron cross painted on the mouth of the hat, which was added to cover up a bullet hole. It is estimated at $15,000-20,000

•    93rd Aero Squadron. "Screaming Indian" Panel. The 93rd Aero Squadron was founded in August 1917 in Missouri and were deployed to France in June 1918 where they moved up to the front in the Toul Sector, near Verdun, to support the American push in the St Mihel area. In their short time on the Western front, they flew 1,183 sorties and 151 combat missions with 31 enemy aircraft shot down. The panel on offer is different any of the Screaming Indian insignia offered at auction in the last 10 years as it is painted on aircraft linen as an object to be hung. It was likely recovered from a mess hall at one of the aerodromes that the 93rd flew from. It is estimated at $15,000-20,000

•    Camouflaged Section of a Fokker D VII, Shot Down by A.W.Carter, 201st squadron RFC. This painted camouflage canvas panel from a German Fokker D VII plane was recovered from a crashed plane by the Canadian Pilot A.W.Carter (1894-1986) who shot it down. A.W ‘Nick’ Carter joined the Canadian air-force in 1916 and took part in operations on the Somme and other battles. Overall, he was credited with 6 victories in World War I. Along with the panel are 8 periods photographs of Carter and his fellow flyers and a letter from Carter to a collector called ‘Jim’ explaining the history of the panel and giving details on the photographs. It is estimated at $10,000-15,000