Chicago — Potter and Potter's early spring auction celebrated the life and contributions of beloved industry friend Ray Goulet as well as surpassed its high estimate in sales. After a long day of competitive bidding, 49 lots realized between $1,000-5,000; 7 lots realized between $5,001-$9,999; and 7 lots broke the five-figure mark. Prices noted include the company's 20% buyer's premium.

This sale's outstanding offering of promotional posters and broadsides captured the attention - and the pocketbooks - of enthusiasts worldwide. Lot #549, a 1911 letterpress poster advertising a matinee performance of “Challenged” or “Houdini Upside Down” at the Southampton Hippodrome took the pole position in this category, realizing $18,000. This absolute rarity - the only known example extant- was inscribed and signed by Houdini in the central right blank space: “To my friend John Mulholland/Houdini.” Lot #559, a dramatic linen backed lithograph titled Thurston The Great Magician. Do They Come Back? came forward at $12,000, doubling its low estimate. This 1910 rarity featured Thurston’s spirit cabinet routine, where he sat at the center of the cabinet, eyes closed, with his hand to his head as if listening to the wispy spirits behind him. Lot #551, a c. 1905 color litho featuring Harry Kellar's most famous and significant theatrical achievement - the levitation of an assistant in a Moorish setting - rose to $10,200. And lot #551, the three sheet color lithograph Alexander The Man Who Knows realized $6,600 - more than twice its low estimate. This framed example from c. 1915 depicted the mind-reader holding a crystal ball and gazing out at the viewer. 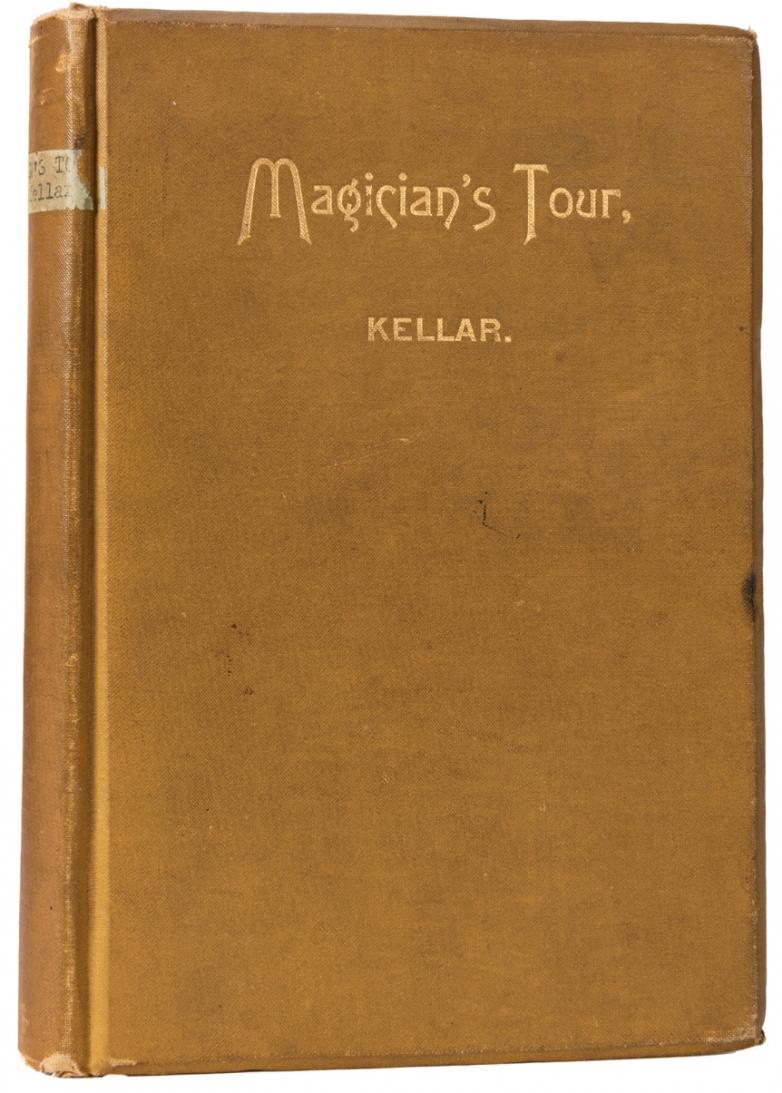 Stage and performance costumes also represented some of the top results in this sale. Lot #348, an early 20th century Chinese Imperial robe, made an astonishing $21,600 on its $500-750 estimate. This colorful, floor length garment had long sleeves and was elaborately decorated with embroidered dragons and other traditional Chinese symbols. Lot #347, a late 19th century Chinese woman’s domestic robe, sold for $7,200 on its $400-800 estimate. This elegant example featured embroidered waves and flowers, medallions of flowers, and nectar-drinking birds on a mostly black ground. And lot #481, a black robe worn as the stage costume of vaudeville performer Arthur Lloyd, topped off at $6,600 on its $1,500-2,500 estimate. Lloyd, better known as the Human Card Index, was able to instantly produce from his pockets virtually any card, ticket, form, or document, called for by the audience. This lot also included approximately 150 items produced by Lloyd while wearing the robe.

The range of magic apparatus available through this sale was truly spellbinding. Lot #174, a German made, c. 1930s-era birdcage trick made $1,680 on its $250-350 estimate. In this illusion, the 7 x 4 ½ x 5 ½” nickel-plated cage vanished from the magician’s grip, with the right sleight of hand, of course.  Lot #198, a collection of mid-century electra tricks, sold for $1,320 on its $200-300 estimate. This grouping included four versions of the same effect - in tin, aluminum, wood, and other materials - in which the magician removed small light bulbs from a stand, swallowed them along with a length of wire, then produced the bulbs from his mouth strung on the wire. Lot #271, a c. 1944 gas mask to gas bag illusion by Davensport of London, exploded to $2,040 on its $300-500 estimate. This hand painted and well-constructed World War II-era gag visibly converted a faux gas mask into a “little bust of Hitler,” according to the manufacturer’s description. And lot #359, a collection of 125+ coin boxes and coin magic items cashed in at $2,280 on its $400-600 estimate.  The grouping included examples by Johnson, Brema, and other manufacturers as well as gimmicked coins and several magic tricks.

There's no need to paper over the world-class selections of ephemera - including photographs, brochures, advertisements, and souvenirs - available through this auction.  Lot #486, a c. 1850 Theatre Robert-Houdin souvenir fan, made $10,200 on its $4,000-6,000 estimate. These wooden ribbed, pictorial fans were distributed to attendees at the Theatre Robert-Houdin in Paris. One side featured an engraving of the entrance to the theatre; the other had vignettes of Robert-Houdin’s most famous tricks and French verses describing them. Lot #515, a 1960s era spook show window card that featured a decapitation and monstrous imagery sold for $1,800 on its $100-200 estimate. Titled Dr. Brundell Presents Shock on Stage, this rarity had a Jack Gwynne poster mounted to the opposite side. Lot #491, two albums of magicians’ throw-out cards and ephemera, traded hands at $1,320 on its $300-500 estimate. The grouping included an organized album of 100+ vintage and modern throw-out cards - some signed -  and a second album of ephemera including magicians’ envelopes, membership cards, paper souvenirs, business cards, and other related items. And lot #506, a collection of 150 magicians’ bookplates, turned the page at $1,200 on its $150-250 estimate. These were mostly mounted to pages, with a quantity of others loose in envelopes at the front of the album.

This memorable sale closed the circle with well curated selections of books and other antique magicana. Lot #400, a first edition presentation copy of Harry Kellar's A Magician’s Tour, sold for $16,800 on its $2,500-3,500 estimate.  This 1886 example, published by R.R. Donnelley & Sons in Chicago, was inscribed twice by the author. The first was to Li Hung Chang, a Chinese viceroy. It read, “A son excellence/Li Hung Chang/with compliments of The Author/New York Sep. 2 1896.” And the second was “To Howard Thurston, Esq./from his friend Harry Kellar.” Lot #457, a c. 1875 bronze desk set in the shape of a conjurer performing "cups and balls" on a draped, folding table, made $11,400 on its $4000-6,000 estimate. This breathtaking, functional, and finely finished example was once owned by magician and scholar Bob Read.  And lot #454 - a card case presented by magician Chung Ling Soo to his trusted illusion builder Percy F. Ritherdon - racked up $8,400 on its $5,000-7,000 estimate. This c. 1915, cast and hallmarked silver card case was decorated with scalloped edges, a celestial dragon, a bamboo tree, and an engraved medallion and  was obtained by the consignor directly from Ritherdon's family.

According to Gabe Fajuri, President at Potter & Potter Auctions, "Results in all collecting categories for this sale were strong, and we couldn't be happier with participation from active, interested collectors from across the globe. I was especially happy to see the outpouring of interest from the fans and friends of Ray Goulet at the auction."