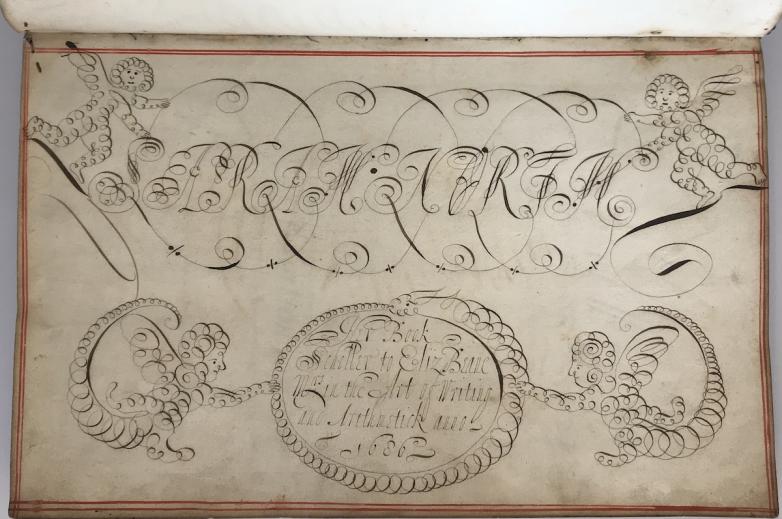 Leyburn, England — A rare 17th century copybook giving insight into the education of women in the era and the history of a Cork family is to be sold in Tennants Auctioneers’ Spring Sale on 19th and 20th March, with an estimate of £1,000-1,500 plus buyer’s premium. The book is part of the Selected Contents of Forcett Hall, North Yorkshire, as instructed by the Executors of the late J.H. Edwards-Heathcote Esq., that are up for auction in the two-day sale.

The illustrated copybook demonstrating calligraphy, handwriting and arithmetic, was completed by Sarah North in 1686, a student under private tutor Elizabeth Beane ‘mistress in the art of writing and arithmetic’. The leather-bound volume is filled with mathematics and embellished with calligraphic drawings, demonstrating the penmanship and education of Miss North. Three other similar copybooks produced under Beane’s tutelage are known; one by Mary Serjant of 1688 held in the Beinecke Rare Book Library, Yale, one by Sarah Cole of 1685 held in the Folger Shakespeare Library, Washington D.C., and one by Anna Dowe of 1689 that was sold at Sotheby’s in 1972.

Sarah North was born in Lewin’s Mead, Bristol on 13th September 1666. She married twice, firstly to Thomas Pope from 1687-1693, and secondly to Ebenezer Pike from 1693 until her death in 1716. The Pike family of Cork were Quakers originally from Berkshire, who settled in Ireland after Richard Pike served there in 1648 as a trooper in Cromwell’s army. The Pike family were to prosper in business in Cork and were involved with the likes of the Cork Steamboat Co., through which he would have had cause to travel to the port of Bristol where he presumably met Sarah.

Following her second marriage, Sarah’s copybook was added to; the flyleaves front and back have been filled with handwritten birth and death records for the Pikes of Cork. In addition, slipped between the pages are printed birth records with handwritten dates, names of baby and parent, and the midwife’s signatures. A fascinating family record and a rare piece of ephemeral social history.

An illustrated catalogue will be available at www.tennants.co.uk leading up to the sale, and remote bidding is available.