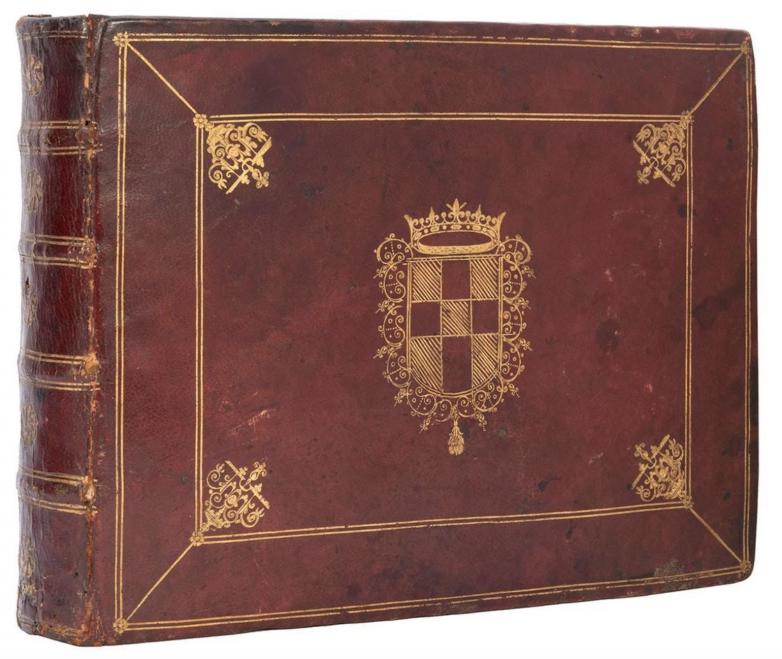 Chicago — Potter & Potter Auctions is pleased to announce this 600+ lot sale to be held on Saturday, August 28th starting at 10am CDT. The event will be held online and live streamed, with a limited number of bidders physically allowed in the gallery as determined by current Illinois public health attendance guidelines. Please call the auction house, located at 5001 W Belmont Avenue in Chicago, at 773-472-1442 to reserve seats. Bidding will take place through Potter & Potter's website, at www.potterauctions.com. Phone and absentee bids are also welcome. All items are available for in-person preview, by appointment only.

Century spanning antique books hold several of the top lot slots at this signature sales event.
•    Lot #212, William Jardine (1784–1843) and Prideaux J. Selby's  (1788–1867) four volume Illustrations of Ornithology, is estimated at $12,000-15,000. This first edition was published in Edinburgh by W. H. Lizars and is rarely seen complete with the fourth volume. This work was published to compliment Selby’s Illustrations of British Ornithology (1821–33) and in response to the lack of works on non–European avifauna.
•    Lot #435, Thomas Hobbes' (1588–1679) Leviathan; or, The Matter, Forme, & Power of a Common–Wealth Ecclesiasticall and Civill, is estimated at $18,000-22,000. It was printed in London by Roger Norton and Richard Cotes for Andrew Crooke in 1651. This is a first edition of one of the most important books in the history of political philosophy. Its publication “produced a fermentation in English thought not surpassed until the advent of Darwinism."
•    Lot #468, Titus Livius' (c. 59 BCE–c. 17 CE) Historiae Romanae decades, is estimated at $10,000-12,000. It was edited by Marcus Antonius Sabellicus and published in Venice by Philippus Pincius for Lucantonio Giunta in 1495. This 2nd illustrated edition of the history of Rome has the woodcuts first appearing in the 1493 edition and the elaborate borders from earlier works by Giovanni Ragazzo, including his Plutarch.
•    Lot #481, a first American edition, first binding of Herman Melville's (1819–1891) Moby–Dick; or, The Whale, is estimated at $50,000-60,000. It was published in 1851 in New York by Harper & Brothers. It includes its original publisher’s cloth blind stamped with the publisher’s circular device at its center, endpapers, and flyleaves. In Grolier’s One Hundred Influential American Books, this novel is described as containing “the sounds and scents, the very flavor, of the maritime life of our whaling ancestors” and in Johnson’s High Spots a “masterpiece” after rising from semi–obscurity in the 20th century.
•    Lot #202,  Charles Darwin's (1809–1882) On the Origin of Species by Means of Natural Selection, or the Preservation of Favoured Races in the Struggle for Life, is estimated at $8,000-11,000. It was published in London by John Murray in 1860. This second edition, second issue has an 1860 imprint and “fifth thousand” on title page; in actuality only 3,000 copies were printed bringing the total to 4,250. Roughly two copies of the first issue exist with an 1859 imprint. According to our expert catalogers, this is an "attractive copy of the most influential and important biological work ever produced on any continent."

This event also includes remarkable selections of early and original maps and atlases.
•    Lot #38,  George H.V. Collot's  (1752–1805) A General Map of the River Ohio made of four engraved plates by Tardieu, is estimated at $9,000-12,000. This copy, being one of 100 printed in English, was published in Paris in 1804 but issued in 1826. Its total length is 3,162 mm. This map was compiled by Collot for his Voyage dans l’Amerique Septentrionale - one of the most important and exceedingly rare American cartographic works of the 18th century - and is considered the finest period map of the upper Ohio River.
•    Lot #86, Samuel A. MItchell's (1790–1868) A New Universal Atlas Containing Maps of the various Empires, Kingdoms, States and Republics of the World with a special Map of each of the United States, is estimated at $3,800-4,200. This folio was published in Philadelphia by Charles De Silver in 1857. It includes large vignette, hand–colored frontispieces of the heights of the principal mountains and lengths of the principal rivers and 76 hand–colored lithographed maps. This early edition also contains several maps not found in other editions, including one which shows Nebraska, Kansas, New Mexico and Indian territories.
•    Lot #126, a second edition of Gerard Mercator (1512–1594) and Jodocus Hondius', (1563–1612). Atlas sive Cosmographicae Meditationes de Fabrica mundi et fabricati figura, is estimated at $18,000-22,000. It was published in Amsterdam in 1632 by Johannis Cloppenburgh and includes 179 maps mostly engraved by Pieter van der Keere after Hondius, Beins, Surhon, and Martin. This edition, the first published in Latin, includes the map of Frisia Occidentalis which is not recorded in Koeman’s collation.

Also on offer are museum quality selections of important documents with ties to some of the most recognizable personalities of the last two centuries.
•    Lot #71, an engraved document signed by President Abraham Lincoln (1809–1865) and countersigned by his Secretary of War in 1861, is estimated at $4,000-6,000. This one page note formalizes the military appointment of Albemarle Cady (1807–1888) as lieutenant colonel in the 7th Infantry Regiment. Cady served in the Second Seminole War, Mexican–American War, First Sioux War, and the American Civil War.
•    Lot #369, a typed and signed document from Edgar R. Burroughs (1875-1950), is estimated at $900-1,200. This two page note, dated January 27, 1919, is the contract between Burroughs and A. C. McClurg for the publication Burroughs' Jungle Tales of Tarzan. According to the letter, the book is to be sold at retail for $1.40 and Burroughs is to receive royalties of 15% on the first 25,000 copies sold and 20% upwards of 25,000 copies sold afterwards.
•    Lot #111, a one page, typed signed letter from Nikola Tesla (1856–1943) to Hereward Carrington (1880–1958), is estimated at $1,500-2,500. In this note from 1980, Tesla responds to a well–known investigator of psychic phenomena agreeing that “the subject is most interesting." During the height of this spiritualism craze of the 1900s, Tesla was experimenting with wireless power as a way to transmit worldwide communications.
•    Lot #479, an 1872 autographed signed letter from Herman Melville (1819-1891) to Miss Coffin, is estimated at $8,000-10,000. In this one page note, with possible ties to the story behind Moby–Dick; or, The Whale, Melville writes: “So long a time has elapsed that I cannot recall where I got the facts alluded to in your note of the 9th inst. Neither– I am so sorry to say– can I direct you where to get information additional to what you may now possess." The Coffins were a prominent 17th through 19th century Nantucket whaling family.

Additional eye catching highlights this sale include portfolios and albums of important drawings and photos.
•    Lot #65, an album of 224 albumen silver prints of scenery along the Santa Fe Route Railways by William H. Jackson (1843–1942), is estimated at $10,000-15,000. Jackson was considered to be one of the most important Western American landscape photographers of any century. This full grain leather bound example was published in Denver by W. H. Jackson & Co. and includes various photo format sizes, each mounted on 23 leaves of heavy card stock. Many are captioned in manuscript and printed in plate. This examples is one of a number of copies made for the director of the Santa Fe Railroad about 1875.
•    Lot #121, a late 19th century album of photographs of Egypt, is estimated at $3,000-5,000. The images include 76 albumen prints mounted on card;  some are signed and titled in the negative. Images include the Sphinx, pyramids, tombs, hieroglyphs, statues, mummies, and street life.
•    Lot #448, a portfolio of prints by Rockwell Kent (1882–1971), is estimated at $20,000-30,000. These were published in New York by Flying Stag Press by Egmont Arens in 1924. This collection is housed in its original cloth backed portfolio and includes 3 leaves of text and 28 original plates on Japanese shogun paper. Each plate is pencil signed by Kent. This example is number 7 of 30 copies produced, of which 20 copies were for sale.
•    Lot #498, a collection of six signed original watercolor drawings for Eugene O’Neill’s (1888–1953) Emperor Jones is estimated at $4,400-5,500. They were drawn by Alexander King (1899–1965) in the late 1920s and measure 356 x 254 mm each. They are produced on heavy art paper and are captioned with suggested placement within the text. This grouping also comes with an autograph letter signed by King to bookseller Harry Marks describing the origins of his professional relationship with the author.

This sale comes full circle with modern editions and other category-bridging ephemera.
•    Lot #286, a newsstand copy of Volume 1, Number 1 of Playboy magazine, is estimated at $2,000-3,000. Dated December, 1953, this fine, saddle stitched example includes its original pictorial wrappers and features Sweetheart of the Month Marilyn Monroe as the centerfold in the classic Golden Dreams nude photo by Tom Kelley.
•    Lot #524, a paperback copy of J.K. Rowling's Harry Potter and the Philosopher’s Stone, is estimated at $6,000-8,000. It was published in 1997 in London by Bloomsbury and includes its original publisher's pictorial wrappers. This first English paperback edition of the rare first Harry Potter book was published on the same day as the hardback issue, and includes a number of well documented typos and misspellings.

According to Christopher Brink, Potter & Potter Auctions' Director of Fine Books and Manuscripts, "This sale is going to be one of the highlights of the year and our most important book auction to date. Several of these items have not been on the market or are seldom seen at any auction house."