Plath’s Letters & Personal Items to be Offered at Sotheby’s 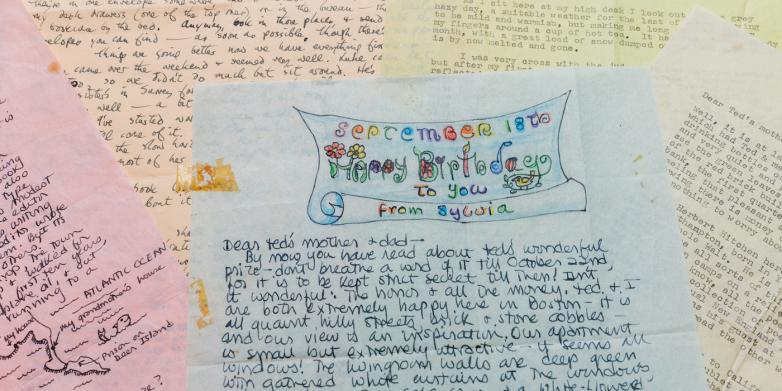 A selection of letters from Sylvia Plath to Ted Hughes' parents.

London — A hugely important collection of letters and personal items belonging to Sylvia Plath, including passionate love letters written to Ted Hughes following their marriage in 1956, will be offered for sale at Sotheby’s on 9-21 July. The sale, which contains the most significant letters of Plath’s to ever come to auction, comprises 55 lots and comes directly from the collection of Sylvia’s daughter, Frieda Hughes.

"This auction is really about the happiest and the most dynamic part of my parent’s relationship when they were working at their best together and still very passionately in love and supportive of each other. If you read my mother's letters to my father, their passion and their love is extraordinary. I'm not sure everybody finds a love like that in their lifetime. And if they do, however short-lived it is, it's going to be quite a ride. I would like to think that this auction will enable these items to go on and continue to have a life beyond me with somebody who will really treasure them. I am very conscious that one day, after I am gone, nobody will know the origin of anything in my ownership. So, with this sale, I am reassured to know that the people who acquire these items will always attach them to their origins, and care for them because of their history." --Frieda Hughes

“Sylvia Plath is one of the most beloved literary voices of her time, and her contribution to 20th century culture is difficult to overstate. Each item in the sale allows us to better understand the personal life of the poet, the letters in particular offer insight into her passionate love for her husband, Ted Hughes, her fanatical dedication to her writing, as well as her aspirations and hopes for the future.”
--Dr. Gabriel Heaton, Sotheby’s English Literature & Historical Manuscripts Specialist

THE LOVE LETTERS
Following their marriage in October 1956, Ted Hughes and Sylvia Plath were apart for a brief period whilst Plath studied at studying at Newnham College, Cambridge, on a Fulbright Scholarship and Ted was in London. The current series of letters, all 16 written during this period of separation, are the only letters from Plath to Hughes to have survived. Offered as individual lots, they are together estimated £143,000 - £202,000.

Especially evocative are the handwritten sections in which Sylvia expresses adoration for her husband; ‘I love you and perish to be with you and lying in bed with you and kissing you all over … I love you teddy teddy teddy teddy and how I wish I could be with you… All my love ever, your own love wife, Sylvia.’ The separation clearly took its toll. She describes being ‘indissolubly welded’ to her new husband and missing him whilst he is in London; ‘Never before in my life have I been parted from one I love so immeasurably more than myself; my god, do let me be with you soon.’

Others contain drafts of her poems, as well as critiques of Hughes’ work, who at the time was writing the poems that would appear in his breakthrough collection ‘The Hawk in the Rain’. Plath references these poems, anticipating his book and what a success it will be ‘My husband is a genius’, and there is a strong sense throughout that the two artists are working in collaboration during their early years.

We also get a glimpse into her life at Cambridge where she strikes an engaged but lonesome figure, describing the other girls in her seminars, as well as her spare time sketching and writing outdoors. She worries about how her marriage will affect her scholarship and confides in Ted as she struggles to relate to her peers; ‘I certainly prefer being alone; I shun people like poison; I simply don't want them’ … ‘Why do I have this terrible revulsion at the words and gestures of everybody who is not you?’ And she remarks on her anticipation for their reunion and life together; ‘I count on fingers: it is eight months till the 9th of June which I hold in front of me like some shining grail: I shall never leave your side a day in my life after exams… I think if anything ever happened to you, I would really kill myself.’

Sylvia’s letters themselves are beautiful artifacts in themselves, containing handwritten sections, scrawled prose and drawings.

THE WEDDING RINGS
Sylvia Plath and Ted Hughes’ wedding rings (estimate; £6,000 - £8,000) were hurriedly purchased by the couple in the run up to their wedding as Sylvia describes in a letter to her brother: ‘We rushed about London, buying dear Ted shoes & trousers, two gold wedding rings (I never wanted an engagement ring) with the last of our money.’

Plath and Hughes were married in London just four months after meeting in 1956 when Sylvia was 23 and Ted was 25 (his parents didn’t know at the time).

The occasion was a happy one, as Sylvia describes; ‘Ted, standing with rain pouring outside in the dim little church, saying the most beautiful words in the world as our vows, with the curate as second witness and the dear Reverend, an old, bright-eyed man (who lives right opposite Charles Dickens’ house!) kissing my cheek, and the tears just falling down from my eyes like rain I was so happy with my dear lovely Ted.’

Offered at auction for the first time, the deeply personal and treasured rings are a unique relic of one of the most famous, and most turbulent, literary affairs of the 20th century. Touchingly, Sylvia’s ring fits perfectly inside Ted’s.

Elsewhere, the auction also includes an Egyptian-style amulet of the Horus Falcon, given by Hughes to Plath on their honeymoon, likely when they were in Paris in June 1956. A gift loaded with symbolic meaning; the image of the hawk reappears through Hughes work of the 1950s.

FAMILY PHOTOGRAPH ALBUM
This family photo album - put together by Sylvia, with handwritten captions - is a remarkable personal record of Plath and Hughes’ married life together, detailing details the couple’s life over 192 photos.

The album begins with photographs taken around the Hughes family home in Yorkshire during her first visit in September 1956, we then see Sylvia  in Cambridge, and move on to their two years in America, with trips to Cape Cod, Boston, and a road trip featured in Hughes’s Birthday Letters. The photos are a visual record of several of the moments recalled in those poems, from fishing in the Great Lakes, to the harsh sun of the Badlands in Theodore Roosevelt National Park, to the bears of Yellowstone, to the scale of the Grand Canyon.

The photographs that follow their return to Britain chart both growing domesticity and literary celebrity. There are several photos of the Faber party for W.H. Auden on 21 April 1960 which saw Hughes photographed alongside Eliot, Auden, MacNeice, and Spender.  The final page is a beautiful colour snapshot of the young family posing among hundreds of daffodils in the front lawn of their Devon home. We also see Sylvia’s keen sense of humour - the cover is decorated with the cut-out floating heads of Frieda and Nicholas as babies (est. £30,000 - £50,000).

A number of individual photographs annotated on the reverse by the couple will also be offered as separate lots, including a photographic portrait of the two by then emerging British fashion photographer, David Bailey (est. £800-1,200).

Each notecard is charmingly dog-eared, and food splattered, and, as Frieda comments, displays her mother’s love for cooking; ‘she was a fantastic baker and a fanatical cook… cooking for my father was one of her joys.’ The cards will be offered alongside Sylvia’s embossed rolling pin.

Elsewhere in the auction is a a pair of chopsticks given by Plath to Hughes (est. £500-700)

TAROT CARDS
This deck of Tarot cards was given to Sylvia by Ted for her birthday. Although at various points in her writing Plath makes references to Tarot imagery and practice, it was initially Hughes which held the interest in the Occult and introduced Sylvia to the cards as well as Ouija boards, crystal balls and astrology. The colourful cards offer a glimpse into the spiritual interests and collaboration of both poets; together they would use a homemade Ouija board to speak to the mystical realm, something Sylvia would go on to write about in her poem ‘Dialogue Over a Ouija Board’ in which a wife becomes skeptical about her husband’s ability to speak to otherworldly contacts (est. £4,000 - £6,000).

LETTERS TO HER IN LAWS
16 letters written by Plath to her parents-in-law, Edith and William Hughes, span nearly five years. The letters show Plath perhaps at her most gushing and see her updating Hughes’ parents on the couple’s writing and publications. In one notable letter, addressed to ‘Ted's mother & dad’, Plath describes going to a New Year fancy-dress party – Hughes dressed as a wolf and Plath as Little Red Riding Hood – costumes that are given a dark symbolism by the future of their relationship. Plath comments further that the ‘two poems about wolves in his second book [Lupercal]’ made Hughes’ costume particularly well-suited. (combined est. £83,000 – £118,000).

DRAWINGS BY SYLVIA
This striking ink portrait was drawn by Plath during the couple’s honeymoon in Benidorm. While a celebrated as a poet and novelist, Plath was also a very talented artist and was an art major before deciding to switch to English on the advice of her teachers (est. £10,000-15,000).

Separately, a curious cartoon drawn by Sylvia called “Great Faux Pas” reflects her ambivalence towards domesticity. She depicts herself as a maid, attacking one of her guests with an axe – presumably a private joke that’s lost to history. The cartoon was damaged in the 1970 fire at Lumb Bank, Hughes's home in Yorkshire. (est. £1,500-2,000).

Further personal items including the Plath family bible (inscribed at the end by Frieda Plath – Sylvia’s aunt, after whom she named her daughter); two glass paperweights used by Ted Hughes; a copy of the Iliad illustrated by the couples mutual friend and celebrated sculptor and draughtsman, Leonard Baskin; and a signed document giving the BBC authorisation to broadcast Plath’s radio play, ‘Three Women’.