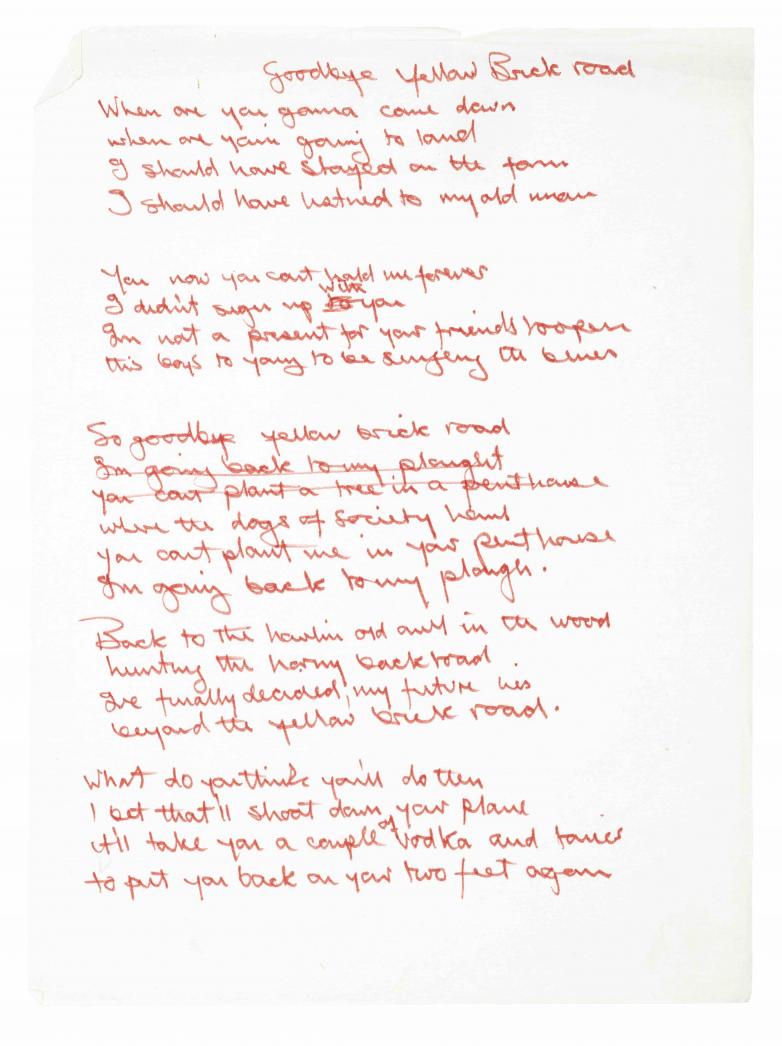 Los Angeles – Bonhams auction of Music Memorabilia will be highlighted by the crown jewels of the Elton John and Bernie Taupin songbook, six original handwritten lyrics for hits such as “Goodbye, Yellow Brick Road”, “Candle in the Wind”, “Bennie and the Jets”, and “Saturday Night’s Alright for Fighting”. The lyrics, from the Collection of Maxine Taupin, will be offered at Bonhams Los Angeles on December 9. Estimates range from $30,000 to $200,000.

Maxine Taupin – the inspiration for the song “Tiny Dancer” – was married to Bernie Taupin in the 1970’s and became privy to Bernie’s creative writing process. Maxine said: “When Bernie had completed an album's worth of lyrics, we would pay Elton a visit; I was always amazed how prolific they were. When I heard the finished songs, I was instantly transported to that magical place these two creative forces have been taking us all for so many years.”

Highlights in the collection include:

•    Original handwritten lyrics for the Elton John song “Candle in the Wind”, written in 1973 and included on the Goodbye, Yellow Brick Road album, a song memorializing the brief, tragic life of Marilyn Monroe (estimate: $150,000-250,000)

•    Original handwritten lyrics of Elton John's “Bennie and the Jets”, the third single from the Goodbye Yellow Brick Road album, and includes a second stanza that did not make it into the final song (estimate: $100,000-150,000)

•    Original lyrics to the early Elton John hit, “The Border Song,” with annotations by Elton John, a rare example of Bernie and Elton collaborating on lyrics (estimate: $30,000-50,000)

•    Original handwritten lyrics to Elton John’s “Your Song”, Elton’s first monster hit, introducing audiences to his exciting new brand of piano pop, and it remains today one of his most identifiable and best-loved songs (estimate on request)

Giles Moon, Bonhams Director of Music & Entertainment Memorabilia, commented: “We are so excited to offer not just one, but six original, handwritten lyrics for some of Elton John’s iconic songs. The lyrics reveals Taupin’s careful wordcraft and his famously inconsistent spelling.”