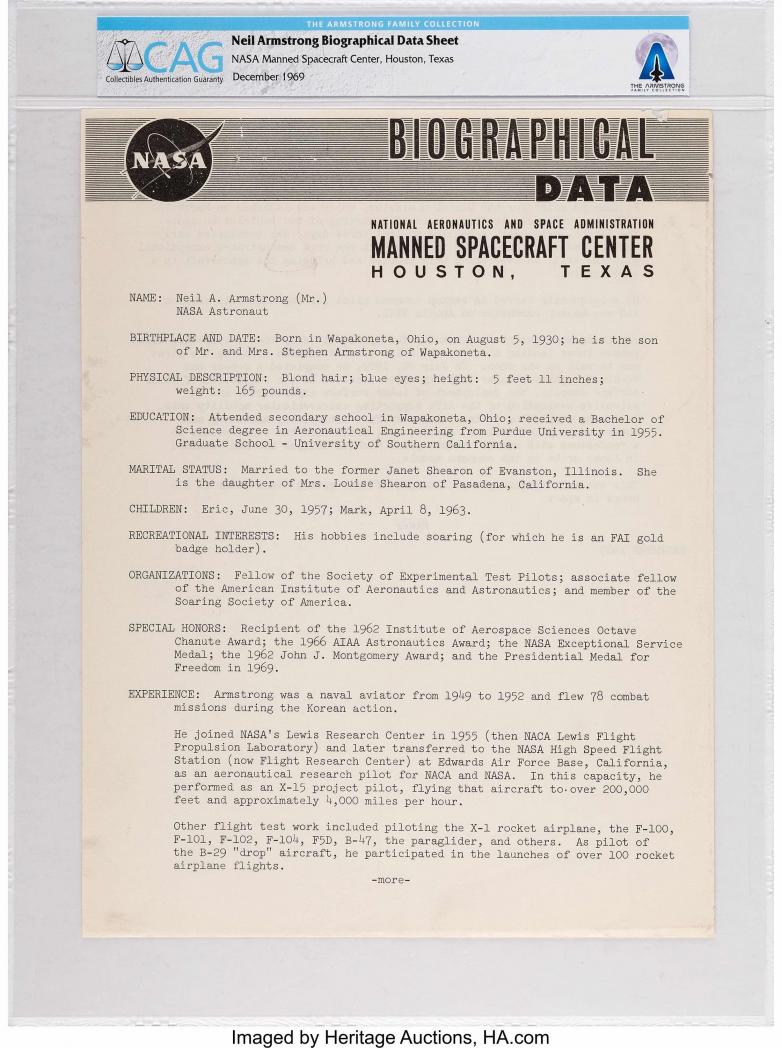 The Armstrong Family Collection™ includes NASA documents, such as the last of NASA’s biographical data sheets on the astronaut.

A 6-1/2 inch by 4 inch flag from Armstrong’s home state of Ohio that flew to the moon aboard Apollo 11 is expected to spark serious bidder interest because it touches on both the moonwalker’s humble roots and his historic accomplishment for humanity, said Michael Riley, Director of Space Memorabilia at Heritage Auctions. It is worth noting that this, and flags from Indiana, Mississippi, and Wisconsin in this sale, are the last state flags that will be offered from The Armstrong Family Collection™.

“Collectors will find a significant number of objects that Neil Armstrong retained for most of his life before and after his historic moon walk,” Riley said. “These offering leans heavily on personal mementos and family gifts after his safe return.”

The Armstrong Family Collection™ includes NASA documents, such as the last of NASA’s biographical data sheets on the astronaut as well as an internal memo titled “Ground Rules For Lunar Mission Radiation,” drawing attention to a rarely discussed, yet early concern regarding the Apollo lunar missions. It reads, in part, “Apollo missions placed men for the first time outside the Earth's geomagnetic shield, subjecting them to potentially hazardous particulate radiation of an intensity and frequency not encountered in the Earth's environment ...” Heritage has made a full transcript of this memo available on HA.com.

All of the lots from The Armstrong Family Collection™ are sold with a Statement of Provenance signed by Armstrong's sons, Rick and Mark. Many of the items from the family collection were painstakingly sealed or encapsulated by Collectibles Authentication Guaranty (CAG) for study by future generations. Armstrong’s sons Rick and Mark have donated several items from the collection, and a significant portion of the auction proceeds, to museums and organizations worldwide, which support space exploration.

In addition to objects from Armstrong’s personal life and times, the auction offers hundreds of pieces of unique and rare space memorabilia fit for museum collections and private collections alike consigned by collectors all over the world.

·         An extraordinarily rare, Biological Isolation Garment (BIG) as planned for the Apollo 11 crew when exiting the Command Module after splashdown and while on their way to the Hornet's Mobile Quarantine Facility makes its auction debut at Heritage. Consigned from a private collection, the suit will be sold along with its original life preserver. The adjustable full-body suit with built-in medical rubber gloves, boots, and face mask, designed by scientists concerned that the Earth could possibly be contaminated by lunar organisms.